This article is specifically written to remove the wrong information about height growth and to save the general population from fraudulent medicines and the harmful effects of experimentation. 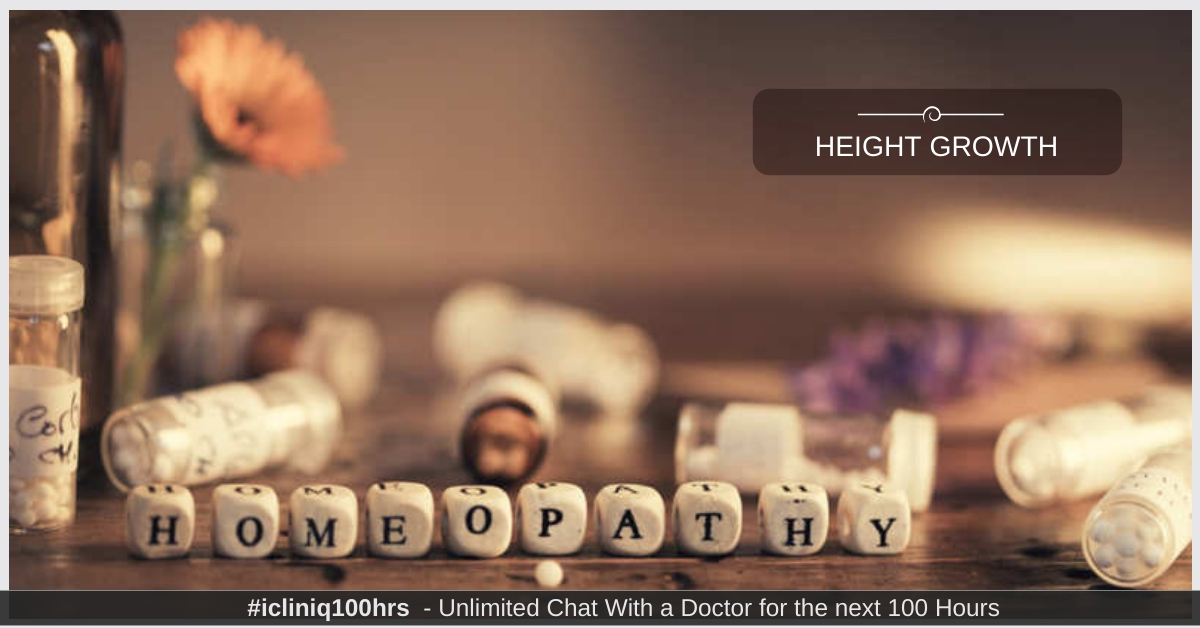 It is a truth that before knowing the inherent qualities of people, they are judged by their external appearance for their abilities. The physical image has become the most important asset for a person, and height plays one of the major roles of disappointment in most.

When we are considering height as a topic of discussion first, we need to know some basic facts.

Height increase depends on the fusion of epiphysis, especially in the long bones, which are known as growth plates. These growth plates keep increasing the length until certain age. This age differs according to sex. Meaning, females stop growing earlier than males. Usually, the maximum age for girls is 16 years, and for boys is 18 years. In very rare cases, it may extend further.

Homeopathy for Homemakers
Height Growth and Homoeopathy - Myths and Facts
Can I grow any longer by taking HGH?

Now when it comes to knowledge in the general population, they are highly dependent on superstitions or rumors. Like after a girl starts to menstruate, the growth stops, which is not true. Also, the prominence of Adam's apple in a boy means he cannot grow more.

So there are many misconceptions about height growth. In addition to that, the internet, television, and other forms of advertisement also cause a lot of confusion in people. They are so lucrative that people often, in search of some miracle, spend tons of money after false promises.

The simple truth is the height growth is possible till the growth plates are not fused, which happens around the age of 18 years. To my surprise, many of the medical professionals either do not know about it. Some quacks take advantage of the innocent people who put trust in them blindly. Many herbal treatments and growth hormones are given without any results, and then patients start blaming the therapy.

Some supplements or exercises and medicines can indeed increase height before the age of fusion, but it highly depends on the genetic inheritance of the person, which is difficult to manipulate.

Ultimately when it comes to the treatment, I request the readers to choose wisely. The most dangerous treatment can be hormonal supplements, which have some severe side effects. Before going for any treatment, make sure you know all the pros and cons of it.

It is obvious that being a homeopathic practitioner, and I will recommend homeopathic treatment but beware. It can help until the age limit and not after that.

Many homeopaths suggest some medicines like Baryta, Calcarea, Tuberculum, etc., but the truth is they do not help mostly without a proper understanding of the case. Instead, get yourself examined adequately by a homeopath and get the constitutional prescription.

For further guidance and treatment, feel free to consult me.

Can adenoids affect the height of a child?

Query: Hello doctor, My daughter is 6.5 years old. When she was 1, she had a seizure for a couple of times in two years, for which she took medicine and now she is off from medicine for the last three years. Now recently she was diagnosed with adenoids for which we are going homeopathy. My concern is she ...  Read Full »

What Is Erectile Dysfunction (ED) ED is defined as an inability to get or sustain an erection firm enough for sexual activity. In easy terms, it is a problem where the male partner is unable to keep the erection firm during sex. Having trouble with an erection from time to time is not a cause for ...  Read Article

Can knee and pelvic x-ray help to check, whether human growth hormone(HGH) will work for me?

Query: Dear Doctor, I have attached images of the latest x-ray imaging (attachment removed to protect user identity). I have taken this x-ray to determine my bone age, reason is that I had planned on using growth hormone therapy to help me grow taller. I was told that these bone age imaging of the wrist is...  Read Full »

Do you have a question on Homeopathy or Height Growth?