Motion sickness is one of the most common illness seen during long distance travel. Motion sickness is very commonly seen in children. However, many adults suffer from it too. Regular and correctly used homeopathic remedies would help to prevent and cure this problem. 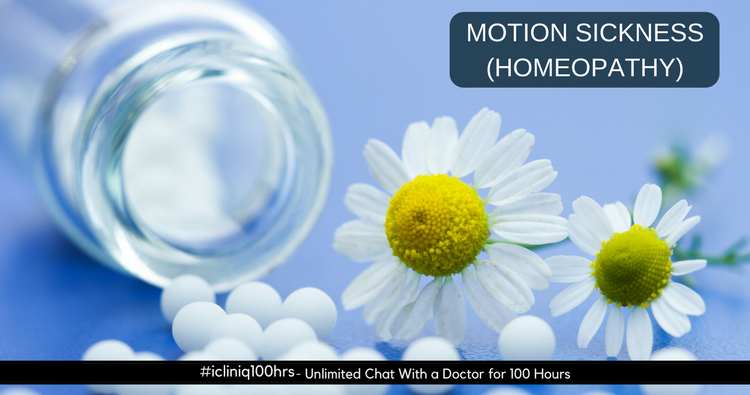 Motion sickness is commonly seen in children. Usually, children between 5 to 12 years are more susceptible to motion sickness than adults. It would be very stressful to handle your kid during motion sickness, and your journey may become miserable. To avoid the uncomfortable situation and keep your travel safe and full of enjoyment, I would advise you to take some common homeopathic remedies. These remedies will prevent motion sickness and would help to cure the problem.

Motion sickness may strike in car, airplane, sea or any mode of transport. It is also called as airsickness, seasickness or car sickness. The most common symptoms of motion sickness are nausea, vomiting, headache, sweating, and general unwell feeling.

There is a long list of homeopathic remedies for motion sickness, but the above mentioned are few of them. The remedies will work if they are strongly indicated. A homeopath must always take the totality of symptoms into consideration to cure the patients.

What is the reason for chest heaviness after starting homeopathy treatment?

Query: Hi doctor, I am suffering from a hiatus hernia, GERD and irritable bowel syndrome for the past two years. I have started taking homeopathy treatment. I am consuming it for about three weeks now. But after taking it, I am having a painful swelling and enlargement of my breast. It causes an unnatural...  Read Full »

I have nausea and burning pain in abdomen. Please provide advise.

Query: Hello doctor, I am a female, 45 kg, 5 feet one inch. I have nausea, slight pain and burning sensation in upper left abdomen, and discomfort on the left side of the abdomen. I am currently on Dolgina, Librax, Calbo.  Read Full »