Are you afraid of being unable to escape from a small room or space? It is a type of anxiety disorder, which can be effectively managed and treated over time. 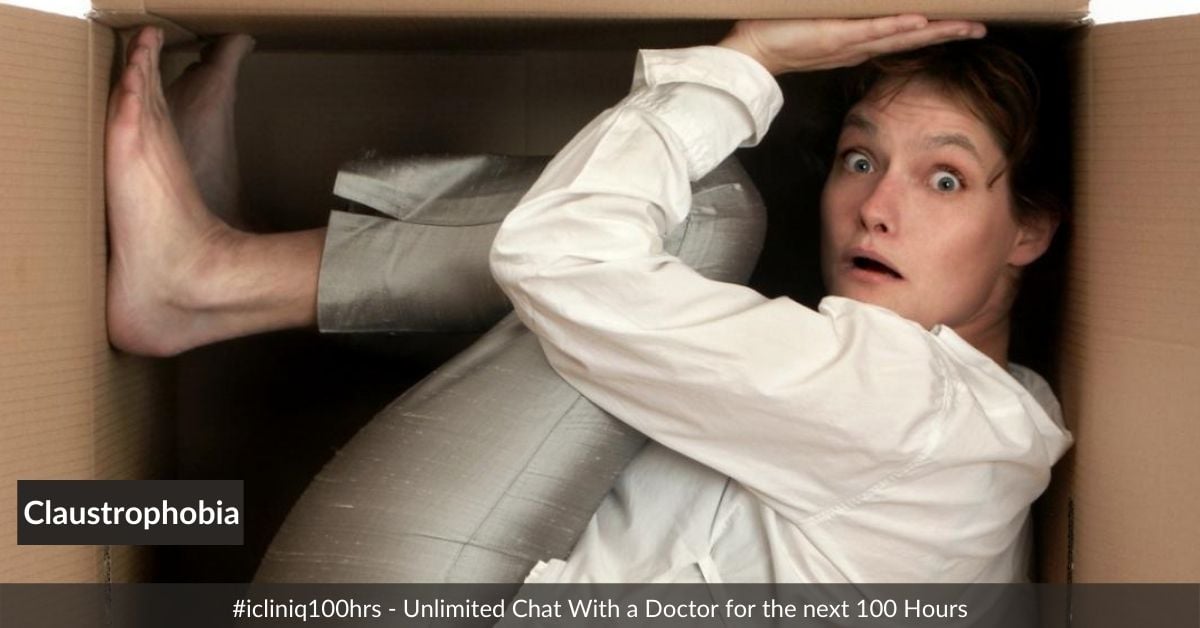 Claustrophobia is a fear of any small and closed area. Someone with claustrophobia experiences anxiety triggered due to irrational thoughts of being confined in a small enclosed space with no alternate escape route. For example, being in a room with no windows, being in a crowded elevator, etc.

It is one of the most common phobias. People with claustrophobia might have a panic attack. Some people need treatment to manage their symptoms while others get better on their own. Around 5 % of Americans experience claustrophobia, but most of them do not seek treatment even when the symptoms are severe.

What Are the Signs and Symptoms of Claustrophobia?

Symptoms usually start during childhood. These symptoms can be triggered even by thinking about confined spaces. Some of the common signs exhibited by a claustrophobic person are:

The typical symptoms exhibited by the person are:

In most cases, the problem is not being in a small room, but rather the fear of what are the things that can happen there and how can the person escape it. The common triggers include:

Childhood experiences are generally what triggers a person to panic when confined to a small and confined place. The following are some experiences that can have this effect:

Classic conditioning - The trauma caused during such an incident will affect how the person copes with similar situations later in life. This makes the person associate small areas with danger, which makes the body react the same way it does to any other danger.

Size of the amygdala (a part of the brain) - Another study has concluded that the size of a part of a brain influenced how we dealt with anxiety-triggering situations.

Perception of space - A recent study revealed that people with claustrophobia sensed objects to be nearer than they actually are, and this caused them to react more severely to small spaces.

Genetics - Having a parent with claustrophobia increased one's chance of having the same.

Childhood trauma - Experiencing the feeling of being trapped in a room as a child might cause this phobia later in life.

Prepared phobia: This is an evolutionary process, where our brains are prepared to help us escape from certain life-threatening situations although it is no longer applicable in our society.

How Is Claustrophobia Diagnosed?

Claustrophobia is most commonly diagnosed by a psychologist or psychiatrist and usually emerges during a consultation for anxiety problems. The specialist will tell you to describe your symptoms and will try to rule out other causes or types of anxiety. For claustrophobia diagnosis, the following criteria have to be met:

How Is Claustrophobia Treated?

Psychotherapy is the most commonly used treatment for claustrophobia. Psychiatric counseling can help patients overcome fear and manage triggers. The treatment options include:

Cognitive-behavioral therapy (CBT) - CBT helps control and alter negative thoughts that the person gets from objects or situations that trigger phobias. The patient learns to change the reaction to these situations by learning ways to change his or her thoughts.

Exposure therapy - Here, the patient is exposed to a non-dangerous situation, which triggers claustrophobia. This helps the patient confront and overcome his or her fear.

Medication - Antidepressants or anti-anxiety medications are also prescribed to treat panic attacks and other symptoms.

How to Cope During Episodes?

- Distract yourself with other interesting thoughts.

- Reassure yourself that this is a temporary feeling and it will pass.

- Meditation and yoga will help in the long run with learning to control negative thoughts.

Claustrophobia can be treated, and many people gradually grow over their fears by repeatedly being exposed to the stimulus, or naturally with age. If you have claustrophobia for more than six months and it is crippling your daily life, it is time to seek help from a specialist who deals with phobias and experienced in providing the right type of therapy for your condition. For more information on claustrophobia, consult a specialist online now!

Can claustrophobia be completely cured?

Yes, it is possible to treat and completely cure claustrophobia. This can be achieved with the help of self-exposure therapy, which is otherwise called desensitization. Here, the person is exposed to the object or situation that results in unusual fear repeatedly. Cognitive-behavioral therapy (CBT) can also be helpful.

How does claustrophobia present?

A claustrophobic person might experience the following symptoms following triggers such as being in a confined space or a crowded space:
- Trembling.
- Sweating.
- Hot flashes.
- Fast heartbeat.
- Nausea.
- Chest tightness.
- Panic.
- Feeling confused.

How dangerous is claustrophobia?

Claustrophobia per se is not dangerous, as it does not result in life-threatening complications. But if you experience severe symptoms, it can affect your personal and professional life. Some people even develop severe panic attacks and severe anxiety.

What is the fear of being in tight spaces called?

The fear of being in tight spaces from where such people cannot exit, or being stuck in a confined place is called claustrophobia.

Does claustrophobia fall under mental illness?

Yes, claustrophobia does fall under the category of mental disorders. It is actually a type of anxiety disorder that results in intense fear of enclosed spaces. It also leads to severe panic attacks.

An irrational fear of potential adverse outcomes of entering the water, such as drowning, is called aquaphobia. An aquaphobic person becomes anxious by the thought of entering swimming pools, lakes, bathtubs, etc.

Can claustrophobia be genetic?

A recent study showed that a single gene mutation, which regulates a stress-related protein, can potentially cause claustrophobia.

Why do some people wake up feeling claustrophobic?

Claustrophobic episodes or panic attacks at night can awaken a person from sleep. This might be due to an underlying health condition such as sleep or thyroid disorder.

Can claustrophobia worsen with age?

Yes, it has been found that in some people with claustrophobia, the symptoms worsen as they age. Everyday situations can trigger it.

What is the opposite of claustrophobia?

Agoraphobia, which is the fear of open spaces, is the opposite of claustrophobia.

Can you get claustrophobic in a plane?

Fear or panic attack while flying is due to the fear of being confined in the plane during a long flight (claustrophobia), or it can be the fear of flying itself, which is called aerophobia.

Why do I get anxious on seeing attractive girl?

Query: Hello doctor, I have extreme anxiety when I see an attractive girl. I feel like escaping from that place at that moment. I intentionally avoid going out and limit myself to home only to avoid attractive girls, I even stopped watching TV to avoid this. I believe this symptom may have started with a ...  Read Full »

How to come out of anxiety, stress, and forgetfulness?

Query: Hi doctor, I am suffering from severe anxiety and heart attack like debilitating panic attacks when presented with work deadlines, enclosed spaces such as subways, elevators and small airplanes. I have relationship fears. Nothing in my life provides me joy or relieves me of my symptoms. I had the s...  Read Full »

Do you have a question on Anxiety or Claustrophobia?