Q. My mom's headache has not improved in spite of medicines. Please help.

Answered by
Dr. Srinidhi Ravi
and medically reviewed by iCliniq medical review team.
This is a premium question & answer published on Aug 17, 2017 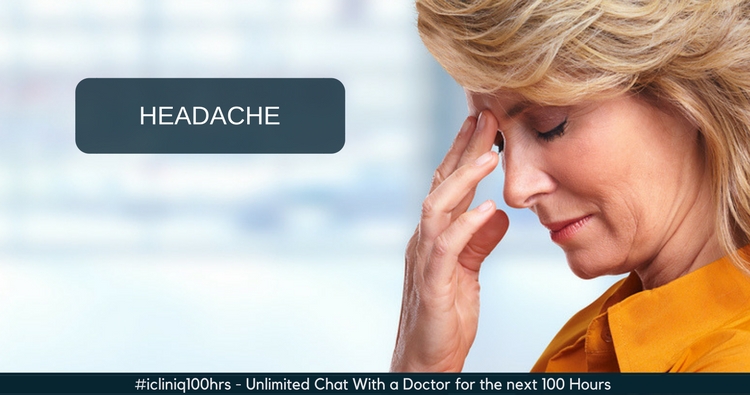 This is regarding the health of my 50 year old mother, who is not keeping well for the past six months. She has been complaining of headaches for the past five to six months, which has been constant with heaviness around her forehead and the area between the eyes and the nose. We got all the recommended tests done including a CT scan of her brain, which showed some age related cerebral atrophy and bilateral basal ganglia calcification. The doctors said that it may be a chronic tension headache, for which they gave her medicines for three months. Now, it is almost two and a half months but, there is no improvement in her condition.

For the past few days, her headache has increased and it is mostly on the forehead, eyes, and nose area. At night, her nose is severely blocked, and the heaviness of the head bothers her a lot. It is affecting her day to day life. And lastly, her condition deteriorated the day she had acidity, indigestion, and nausea. The medicines which she has been taking are Escitalopram 10 mg, Clonazepam 0.5 mg once daily, Nortriptyline 10 mg, Gabapentin 400 mg, Domperidone, Naproxen sodium for pain, and Rablet L in the morning. Apart from these, she has been under medication for hypertension for the past 10 years. They are Cilnidipine, Telmisartan and Rosuvastatin 5 mg. All her blood tests including electrolyte test, CBC, thyroid, etc., has been normal. Only her EEG had shown some changes in the theta waves after which the CT scan of her brain was done.

I just went through your query regarding your mother's health.

Dr.Srinidhi Ravi is a highly skilled and established physician in the field of Allergy Specialist, Otolaryngology (E.N.T). She listens to all the patient queries deliberately and is an expert in de...

This doctor is not available for online consultations on the platform anymore.
Consult other doctors in the same speciality >>
Related Questions:
I have an inflamed foliate papillae for more than three weeks. Is it tongue cancer?


.. on the tongue (attachment removed to protect patient identity) appears to be an ulcerative lesion. You should get yourself examined by an ENT specialist because I think a biopsy might be required. As you might have taken antibiotics for tooth infe...   Read full

Is headache a side-effect of Nevanac ophthalmic suspension?


.. (Nepafenac) does not have such side effects. But, I suggest you reduce the frequency of Nevanac to twice daily after 15 days and then to once at bedtime after next 15 days. You said you are wearing -2.75 in the right and -3.75 in left. This is a ...   Read full

Is there ayurvedic medicine for sensorineural hearing loss?


.. treatment is available for sensorineural hearing loss. But, the results may vary from person to person. Hearing aids are commonly prescribed by ENT specialists. Along with that, you can take this treatment. Capsule Ksheerabala two capsules two t...   Read full