iCliniq / Answers / Obstetrics and Gynaecology / Pregnancy / May I know the chances of getting pregnant after taking ipill?

Q. What are the chances of me to get pregnant after taking i-pill?

Answered by
Dr. Suneetha B S
and medically reviewed by iCliniq medical review team.
This is a premium question & answer published on Sep 11, 2017 and last reviewed on: Jun 11, 2019 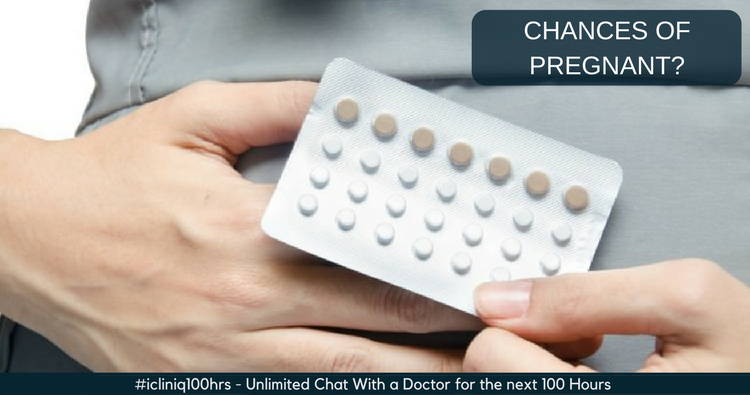 I had sex and took i-pill. My periods started around 12 days later and lasted for 4 days. I got my periods next month around the same date, which lasted for just one day. So, I took a urine pregnancy test, which was negative. I got my regular periods on the third month as well and it lasted for 3 days. My next periods lasted for just 2 days. I have read on the internet sources that many women get periods during their pregnancy. What are the chances of me being pregnant? I am doubtful because I always used to have regular periods which last for 5 days.

How was your bleeding during the cycles? Was the flow scanty when compared to your previous cycle (I am not talking about the duration of flow here)?

If you have further questions, feel free to ask an obstetrician online --> https://www.icliniq.com/ask-a-doctor-online/obstetrician-and-gynaecologist

|
Related Questions:
How to regularize my menstrual cycle?
Pregnancy test shows negative, shall I take medicine to induce periods?
I had sex with my partner last month and missed periods. Am I pregnant?

Query: Hi doctor, I have been trying to conceive for a few months, but every time the test comes back negative. My last periods was on the 25th of last month, and I started ovulating on the third of this month, and it ended on the 12th. My husband and I had sex on the fifth. Despite my history of irregular...  Read Full »

Pregnancy tests are negative, but am still having pregnancy symptoms. Why?

Query: Hi doctor, I am a 27 year old female, who started taking birth control pills eight months back, but I only took it for a week and stopped taking them. In that same week, I had unprotected sex with my fiance, and I had my periods the next day. The next month I got my periods two weeks earlier, and I ...  Read Full »

Tackling the Time Of Menstrual Cycle Every Month

Article Overview: Abdominal pain during periods is a very common issue affecting women.Adhering to a healthy lifestyle i.e balanced diet, physical activity,mental relaxation etc improves the ability to cope with pain.Pain killers can be taken as advised by your gynaecologist. Read Article

Abdominal Pain: Abdominal pain during periods is a very common issue affecting 40-70% of women in the reproductive age group. In medical terms we call this as dysmenorrhoea. This is associated with significant psychological, physical, behavioral and social distress. Usually it starts at the onset...  Read Article