Acute lymphocytic leukemia is a cancerous condition of the blood. Read this article to know more about the causes, symptoms, diagnosis, and treatment 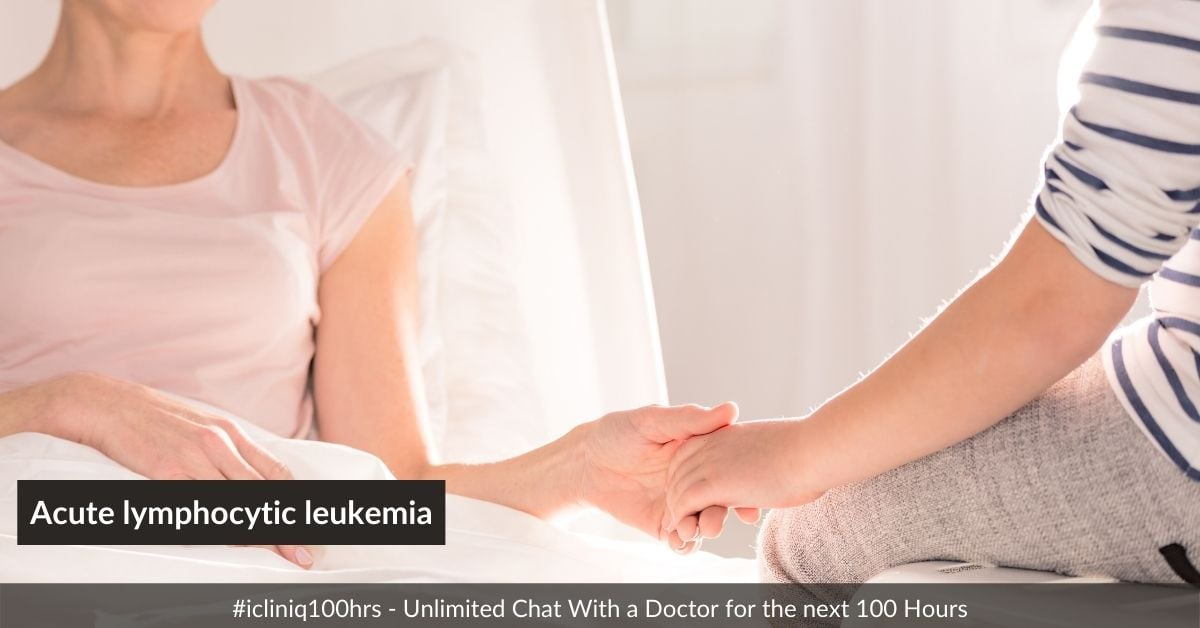 Leukemia is a condition in which there is excessive proliferation of the cells like white blood cells. The white blood cells might include monocytes, lymphocytes, neutrophils, eosinophils, and basophils. When there is an increase in the number of cells more than the normal level, then it might result in the condition called leukemia. In simple terms, leukemia is known as blood cancer.

What Is Acute Lymphocytic Leukemia?

Acute lymphocytic leukemia is a condition in which there is a sudden spreading of the condition. It is also called acute lymphoblastic leukemia. The white cells also fail to achieve maturity, and these immature cells increase in number. It is a life-threatening condition. This condition can affect both adults and young children. Children are most commonly affected than older people. In children, the treatment is known to be very beneficial.

What Are the Causes of Acute Lymphocytic Leukemia?

What Are the Symptoms of Acute Lymphocytic Leukemia?

The symptoms experienced by patients with acute lymphocytic leukemia are:

What Are the Risk Factors Associated With Acute Lymphocytic Leukemia?

The following are the risk factors that are associated with acute lymphocytic leukemia.

How Is Acute Lymphocytic Leukemia Diagnosed?

Bone Marrow Aspiration: A reduced number of red blood cells and increased bone marrow growth are being identified with the bone marrow aspiration technique. In this method, bone marrow is taken from the pelvic bone.

Blood Tests: A routine blood examination is done for the patients to identify the number of RBC, WBC, and platelet. Patients who are affected by acute lymphocytic leukemia have a low level of platelet and hemoglobin. An elevated level of WBS is noted in blood examination.

Spinal Fluid Test: This test is also called a lumbar puncture test. The spinal fluid is collected from the brain and spinal cord to identify the presence of cancer cells in these fluids.

What Are the Treatment Options for Acute Lymphocytic Leukemia?

The treatment plan is decided by the doctor after considering the health status of the individual. The most commonly employed treatment options are:

Chemotherapy: Chemotherapy drugs are prescribed for the patients to control the excessive growth of the white blood cells. These drugs are suitable for both younger and older patients.

Radiation Therapy: Radiation therapy is the best treatment of choice for patients whose central nervous system is being damaged.

Targeted Therapy: This therapy focuses on the specific abnormality present in the body. It can be used alone or in combination with the chemotherapy treatment based on the health of the individual.

Bone Marrow Transplant: In a bone marrow transplant, the bone marrow of the patient is replaced with a healthy and compatible donor.

How Are Lymphocytic Leukemia and Lymphoblastic Lymphoma Different?

In the case of lymphocytic leukemia, cancer cells are located in the blood and bone marrow. In contrast, in lymphoblastic lymphoma, the tumor cells are present in the lymph nodes.

Can We Cure Acute Lymphocytic Leukemia?

Acute lymphocytic leukemia has a recovery rate of 40%. Although it is completely cured in about 80 to 90% of individuals, relapse is common in more than half of these individuals. In addition, the rate of prognosis is highly dependent on several factors like age, type of lymphocytic leukemia, response to chemotherapy, genetic abnormalities, and the general health of the individual.

What Happens When Leukemia Reaches the Final Stage?

What Are the Risk Factors of Acute Lymphocytic Leukemia?

- Viral infections like the Epstein-Barr virus and human T-cell lymphoma/leukemia virus.
- Exposure to chemicals and radiation.
- Genetic syndromes like Down syndrome, Bloom syndrome, Klinefelter syndrome, neurofibromatosis, Fanconi anemia, etc.
- Children and adults above the age of 50.
- Having a twin with a history of acute lymphocytic leukemia.

What Are the Complications of Untreated Acute Lymphocytic Leukemia?

Leukemic cells outweigh the normal blood cells and build up in the bone marrow and blood, which fight against infections, thereby increasing the risk of developing anemia, recurrent infections, and excessive bleeding.

Infiltration of the leukemic cells into the skin results in red and purplish-red bumps, affecting both the outer and inner skin and the tissue layer beneath the skin. It comprises flushed skin, scaly lesions, and plaques.

How Is Leukemia Pain Manifested?

Sharp or constant dull pain is present in leukemia due to the collection of abnormal leukemic cells in the bone marrow. Swelling may be associated with leukemic joint pain. Pain is more common in the long bones of the legs and arms.

Chemotherapy is the best choice of treatment in acute lymphocytic leukemia, which involves three phases, namely, induction, consolidation, and maintenance. It usually takes two years. Vincristine, Dexamethasone, or Doxorubicin are the drugs used in the induction phases. It is mainly aimed at remission, which is destroying the cancer cells to attain an average count of bone marrow cells. The second phase involves taking the same drugs for a few months in high doses. At the last stage, Methotrexate and 6-Mercaptopurine are given for maintenance chemotherapy.

In Which Areas Do Leukemia Rashes Develop?

Leukemic rashes most commonly occur on the extremities like the arms and legs, buttocks, and stomach but can also occur in the eyelids and the inside of the mouth.

How Is Acute Lymphocytic Leukemia Diagnosed?

Can Acute Lymphocytic Leukemia Be Detected With Blood Tests?

Complete blood picture shows abnormally increased white blood cells and abnormally lowered red blood cells and platelets, which is a sign of leukemia. In addition, it also indicates leukemia by showing the presence of immature cells in the bone marrow.

Acute lymphocytic leukemia is a life-threatening condition, which requires immediate medical intervention. However, the prognosis is good in children, and they have a life expectancy of at least five years, whereas, in adults, the prognosis is poor.

With chemotherapy, acute B-cell lymphocytic leukemia usually enters the stage of remission, when the number of leukemic cells becomes nil. However, there may be a relapse in a few patients. If the remission phase lasts for more than five years or more than that, then treatment for relapse can even be cured.

How Is Acute Lymphocytic Leukemia Manifested?

In Which Age Group Is Acute Lymphocytic Leukemia Common?

Although people of all age groups have the risk of developing the disease, the risk is more increased in children and young adults below 20. It is estimated that more than three-fourth of all leukemia patients belong to this age group. Also, children below the age of five years are more prone to get this condition.

Is getting a small amount of blood in nose while blowing a serious issue?

Query: Hi doctor, I am noticing a small amount of blood (less than a drop) in the tissue when I dap my nose. There is no blood when I sneeze. Occasionally, I have a little bit of blood when I blow my nose (again less than a drop). I have been trying a humidifier at night and saline nasal spray. Is it som...  Read Full »

Is shortness of breath related to thyroid issues?

Do shortness of breath and chest pain occur due to anxiety?

Do you have a question on Epistaxis or Bleeding Gums?