Atrial myxoma is a tumor occurring in the heart. Read this article to know more about its causes, symptoms, diagnosis, and treatment. 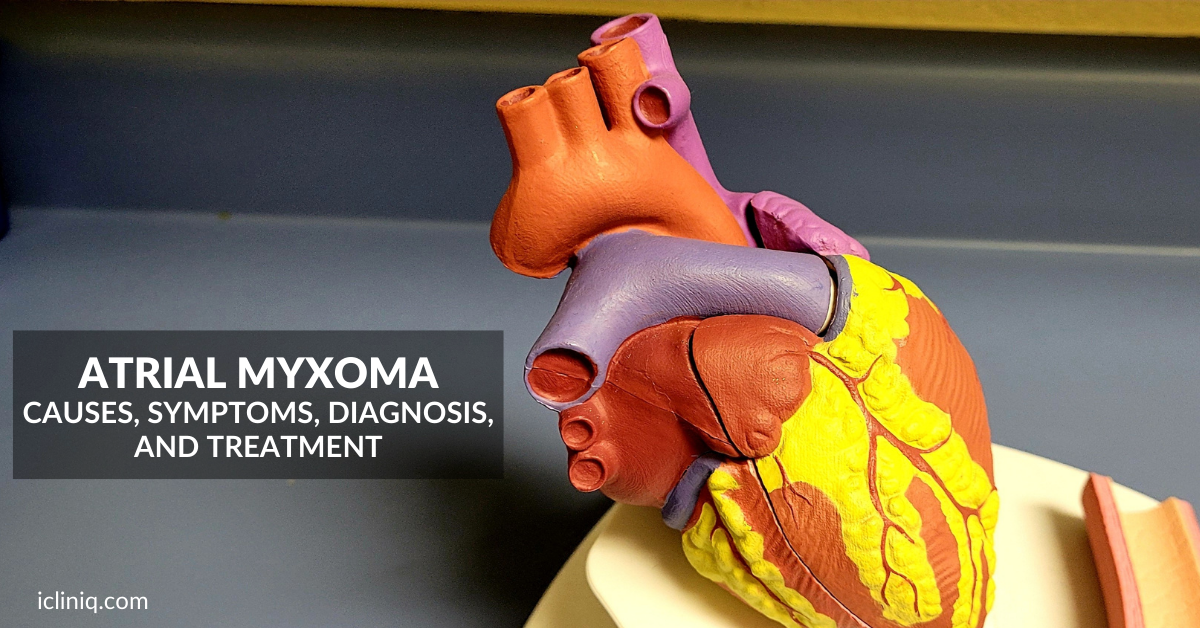 An atrial myxoma is defined as a noncancerous tumor that develops at the superior aspect, either on the left or right side of the heart. It most commonly starts growing on the wall that separates the heart into right and left halves. This wall is called the atrial septum. It belongs to the category of primary heart tumors. Primary heart tumors are the ones that start to develop initially at the heart itself rather than developing from some other part of the body and migrating to the heart.

What Is the Epidemiology of Atrial Myxoma?

Atrial myxomas are the reason for 0.25% of overall heart diseases. However, their annual incidence does not frequently exceed 0.5 to 1 cases per million people. Also, atrial myxomas are the most frequently occurring primary cardiac tumors in adults, and it represents more than 50% to 85% of benign tumors. It is more commonly noted in the female population.

What Are the Causes of Atrial Myxoma?

Most cases of atrial myxoma are very sporadic, and the exact cause tends to be unknown.

Carney’s syndrome is identified to be genetically heterogeneous in nature, and it is caused due to defects present in more than one gene. Carney’s syndrome is estimated to account for almost 7% of all atrial myxomas without any bias for age or sex. Abnormalities in the short arm of chromosome 2 known as Carney and chromosome 12 termed as Ki-ras oncogene are known to be the cause. Atrial myxoma can affect more than one region of the heart at the same time.

What Are the Symptoms of Atrial Myxoma?

Most cases of atrial myxomas do not usually present with symptoms. They are very often accidentally discovered when an imaging study such as an echocardiogram (ECG), magnetic resonance imaging (MRI), or computed tomography (CT) is done for some other reason.

Symptoms can occur at any part of the time from when the tumor has started to develop, but often they start occurring with a change in body position.

The most common symptoms of a myxoma may include the following:

The least common symptoms of atrial myxoma may include:

What Are the Characteristics of Atrial Myxoma?

Atrial myxomas appear to be polypoid, round, or oval in nature. They look gelatinous with a smooth or lobulated surface. Their color usually ranges from white, yellowish, or brown. The most frequent site of attachment is at the border of the structure of the heart called fossa ovalis in the left atrium. However, myxomas are also noted to originate these days frequently from the posterior atrial wall, the anterior atrial wall, or from the atrial appendage. The movement of the tumor depends on the extent of attachment of the tumor to the interatrial septum and the length of the stalk.

Due to the nonspecific nature of symptoms, the early diagnosis might be quite challenging. Left atrial myxoma may or may not show characteristic sounds on auscultation. Laboratory studies are also nonspecific for atrial myxoma. The usually noted laboratory findings include elevated levels of erythrocyte sedimentation rate (ESR), C-reactive protein, and serum gamma globulin levels. Leukocytosis can be present. Anemia is also noticed which may be normochromic or hypochromic. Hemolytic anemia also occurs because of the destruction of red blood cells by the growth of the tumor. Serum interleukin-6 levels are also noted to be raised and can be used as a good marker to check for recurrence. Two-dimensional echocardiography is the gold-standard diagnostic procedure of choice.

The treatment of choice for atrial myxoma is the surgical removal of the tumor by median sternotomy. The recent advancement of mini-thoracotomy by robotically assisted surgery has been reported to result in a comparatively shorter duration of hospital stay, and it is now considered to be a safe and effective method in excising atrial myxoma. Some patients will also need their mitral valve to be replaced. If the surgery did not remove the tumor cells completely it might recur.

What Is the Prognosis?

Untreated, atrial myxoma can cause an embolism when the tumor cells break off and travel to the bloodstream. This can cause a blockage of blood flow or even cause the tumor to metastasize and grow in another part of the body. Cells of the tumor can move to organs like the brain, eye, or limbs. This might require emergency surgery to prevent sudden death.

There are some complications seen in atrial myxoma, which can either be due to the lack of treatment or failure of proper treatment. That includes,

Feel free to get assistance from our online platform.

A non-cancerous tumor on the wall that separates the right and left sides of the heart is considered an atrial myxoma. Atrial myxoma can lead to various complications like embolism (blood clot) that obstructs the blood flow, and blocked heart vessels, irregular heartbeat (arrhythmia), pulmonary edema (fluid accumulation in lungs) if left untreated. Therefore immediate management of atrial myxoma is essential.

Why Does Atrial Myxoma Cause Stroke?

Can a Headache Occur Due to Atrial Myxoma?

Cardiac myxoma can occur in adults and children, and it causes embolism (blood clots) in various organs. The cerebral embolism in the central nervous system caused by cardiac tumors restricts the blood flow, and the patient may experience loss of consciousness and headache.

How to Diagnose an Atrial Myxoma?

The various methods involved in the diagnosis of atrial myxoma are:

- Echocardiography is the preferred technique as it evaluates the size, location, and extent of the tumor.

- Coronary angiography aids in viewing the blood supply to the cardiac myxoma.

How Is an Atrial Myxoma Surgically Removed?

The suggested treatment of atrial myxoma involves surgical removal by median sternotomy. Robotically assisted mini-thoracotomy has shown faster recovery and is found to be safer and more effective than other surgeries.

Is Myxoma Treated Through Open-Heart Surgery?

Atrial myxoma does not require open-heart surgery and is usually treated by median sternotomy. It involves the incision into the sternum (flat bone in the middle of the chest) that provides required access to the heart. In contrast, the chest is cut-open in open-heart surgery for procedures on heart muscles, arteries, and valves.

How Long Should One Stay in Hospital After Myxoma Surgery?

Atrial myxoma is a rare tumor that occurs on one left or right side or both. It leads to various complications if left untreated. The atrial myxoma is surgically removed by median sternotomy procedure. It is found that a minimum of 13 to 15 days of hospital stay is required after myxoma surgery. But mini-thoracotomy with robotic-assisted surgery is found to be safe and effective and decreases the days of hospital stay.

Atrial myxoma causes various neurological complications like ischemia and stroke. Studies show that anticoagulant therapy was a conservative treatment before myxoma surgery. However, the complications still occurred even after using anticoagulants, and their use does not offer any useful effects on patients with atrial myxoma.

Does It Hurt After Atrial Myxoma Surgery?

Surgical resection is the best treatment for atrial myxoma. However, age and repeated surgical procedures increase the complications after myxoma surgery. In addition, patients often experience severe chest pain referred to as “chronic post-sternotomy pain” after the surgery, increasing hospital stay. The pain should be treated immediately to avoid consequences like hypertension, increased and irregular heartbeat, respiratory problems, sleep, and behavioral changes.

Atrial myxoma is round or oval in shape and soft in texture. Atrial myxoma is usually large, and the diameter varies from 1 cm to 15 cm. The atrial myxoma releases endothelial growth that stimulates the formation of new blood vessels (angiogenesis). It is responsible for the growth and development of the tumor. Studies show that the growth of atrial myxoma is fast, accounting for 0.49 cm per month.

Is Syncope Caused by Atrial Myxoma?

Atrial myxoma can occur in the right or left atrial wall or on both sides. The prevalence of right atrial myxoma is found to be 15 %. Patients with right atrial myxoma rarely have symptoms like loss of consciousness (syncope). However, it can occur due to irregular heartbeats, reduced blood pressure, and dehydration. It is further evaluated with an echocardiogram and exercise test.

What Can Be Done to Manage the Pain After Atrial Myxoma Surgery?

The chronic postoperative pain that occurs after atrial myxoma surgery is treated as follows:

- Acute pain is managed by Ketamine and non-steroidal anti-inflammatory drugs. Opioids are not preferred due to their side effects.

- For severe pain, non-opioid painkillers and anti-neuropathic drugs are suggested.

- The other options are massage therapy and psychological therapy to reduce anxiety and depression after surgery to manage the pain.

What Is Pre-operative Care for Atrial Myxoma Surgery?

The medications like blood thinners (Warfarin, Aspirin) and other painkillers are stopped five days before the atrial myxoma surgery. Infections are treated with antibiotics. Habits like smoking and alcohol use are avoided. The physician also suggests diet maintenance.

Do you have a question on Atrial Myxoma or ?