What Exactly Does Oedipus Complex Mean?

Oedipus complex is a phenomenon in which the child gets attached to one of the parents and exhibits envy and hatred towards the same-sex parent. 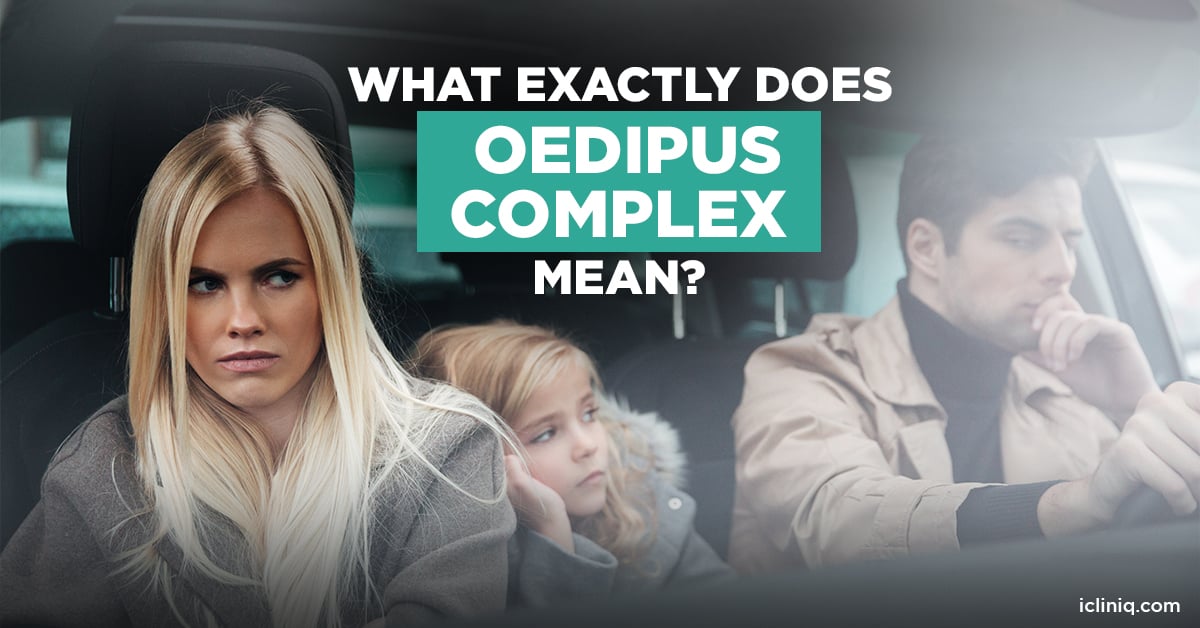 The Oedipus complex is based on the psychoanalytic theory by Dr. Sigmund Freud. When a child exhibits abnormally possessive attachment toward their desired parents and jealousy and resentment towards the same-sex parent, it is known as the Oedipus complex. This functions differently in boys and girls. The child is often jealous of the same-sex parent and starts competing with them.

The Oedipus complex is based on conflict during the phallic phase of the child's psychosexual development. This condition should be resolved, and a healthy relationship between the child and the same-sex parent should be developed to help achieve psychologically healthy adulthood.

What Is the Psychoanalytic Theory?

Moreover, mental states are influenced by two opposing forces. These forces are called cathexis and anticathexis. Cathexis is defined as a mental investment in a person, a concept, or an object. In contrast, anti-cathexis is associated with blocking needs and urges that are considered socially unacceptable. Human behavior, according to psychoanalytic theorists, is deterministic. It is regulated by irrational forces, the unconscious, instinctive and biological urges. Freud also believed that human behavior was influenced and motivated by life and death instincts.

What Is Oedipus Complex?

Oedipus complex or oedipal complex is based on the psychoanalytic theory proposed by Dr. Sigmund Freud. The Oedipus complex, according to Freud's original definition, is a universal phase in the life of a young boy during which he despises his father and aspires to have relations with his mother. These desires could be unconscious. A child's feelings of desire for their opposite-sex parent, as well as envy and rage toward their same-sex parent, are described in this hypothesis.

In simple words, a boy believes he is fighting with his father for his mother's attention and affection, whereas a girl believes she is competing with her mother for her father's attention and love. According to Sigmund Freud, children see their same-sex parents as competitors for the love and attention of their opposite-sex parents. The Oedipus complex is believed to start in the phallic stage of the child's psychosexual development.

There are five stages of psychosexual development;

The parts of the body that excite sexual feeling are linked with each of the five psychosexual stages and act as a source of pleasure during each stage. The motivating force underlying conduct is known as psychosexual energy.

What Is the History of the Oedipus Complex?

The condition is called Oedipus complex because it is based on a story in Greek mythology. According to Greek legend, Oedipus was abandoned at birth, so he had no idea who his parents were. He discovers their true identities only after killing his father and marrying his mother. Although Sigmund Freud first introduced the concept of the Oedipus complex in his 1899 book "The Interpretation of Dreams," he did not use the name until 1910.

How Does Oedipus Complex Work?

The Oedipus complex refers to a child's desire for sexual intimacy with the opposite sex parent, especially a boy's interest in his mother. Although repression keeps this desire hidden from conscious awareness, Freud believed it nonetheless influenced a child's behavior and impacted development.

Based on Sigmund’s psychoanalytic theory, psychosexual development occurs in five stages, and these stages function for a specific period:

What Are the Signs and Symptoms of the Oedipus Complex?

The signs of the Oedipus complex include:

What Is the Electra Complex?

Carl Jung postulated the Electra complex in 1913 as a comparable complex to the Oedipus complex but in young girls. In this complex, girls have a strong sense of longing for their fathers and resentment for their mothers. The phrase Electra complex was rejected by Freud, and he considered that the phrase Oedipus complex applied to both boys and girls, though each gender perceived it uniquely. Sigmund called this phenomenon as feminine Oedipus attitude complex.

According to Freud, a young girl is initially bonded to her mother during female psychosexual development. However, she develops an attachment to her father after discovering she lacks a penis and begins to detest her mother, whom she holds responsible for her "castration." However, Sigmund was heavily criticized because the idea is thought to be highly outdated, sexist, and depends on stereotypical gender roles.

How Is Oedipus Complex Managed?

Children experience a developmental conflict at each stage, according to Freud's theory of psychosexual development. These conflicts should be resolved to construct a healthy adult personality. To overcome the phallic stage conflict and grow into a successful adult with a healthy identity, the child must identify with the same-sex parent.

What Are the Complications of the Oedipus Complex?

If the Oedipus complex is not resolved or treated on time, it can lead to several complications, including:

However, suppose similar signs are noticed in a child (boy or a girl) in that case, it should not be ignored because psychological conflicts during childhood can lead to several psychological problems in adulthood. Therefore, it is highly recommended to visit a child psychiatrist to resolve the condition.

What Is the Oedipus Complex?

Oedipus complex is a psychological theory that says that a kid feels exceptionally close to the parent of the opposite sex and feels envious and expresses aggressive negative feelings toward the parent of the same sex.

Is the Oedipus Complex Proven to Be Real?

How Does the Oedipus Complex Look Like in Adults?

What if a Girl Experiences the Oedipus Complex?

If a girl experiences subconscious sexual attachment to her father from the age of three to six, the term used to describe this condition is the Electra complex.

How Does the Oedipus Complex Affect Relationships?

The unresolved Oedipus complex is known to cause anxiety and confusion regarding relationships in adults and may develop a feeling of competitiveness toward people of the same sex.

The Oedipus complex does not have its place in the current version of the Diagnostic and Statistical Manual of Mental Disorders used by psychologists to diagnose a condition or a disorder.

Is the Oedipus Complex Normal?

Yes, the Oedipus complex is a normal stage that occurs during a child's psychological development, which happens between the ages of three and five.

Do I Have the Electra Complex?

Though the concepts of the Oedipus complex and the Electra complex are not proven and are highly ignored by modern psychology, an adult female may have signs of the Electra complex when she dislikes her mother for no particular reason or when she feels competitive against her mother. Also, she seeks romantic partners with the exact characteristic features of her father.

Do you have a question on Oedipus Complex or ?