What Is Seckel Syndrome?

Seckel syndrome is a rare genetic syndrome that results in restricted growth, both prenatal and postnatal. The growth restriction in the intrauterine period results in poor birth weight, and the limited growth after birth results in dwarfism or short height.

What Are the Other Names of Seckel Syndrome?

What Are the Subdivisions of Seckel Syndrome?

Depending on the gene affected, Seckel syndrome is subdivided into ten types, namely,

What Is the Cause of Seckel Syndrome?

Seckel syndrome is a rare form of a genetic disorder. It exhibits an autosomal recessive pattern. It is caused due to mutations, which are changes occurring in the genes.

In the case of recessive disorders, parents who have undergone consanguineous marriages share a higher chance of giving birth to a child who can either be a carrier or an affected individual of the disease than parents who are unrelated.

When two non-working genes are inherited from each parent, this recessive genetic disorder occurs. If there is an inheritance of one working gene and one non-working gene, then the person becomes a carrier. Carriers are usually asymptomatic.

Seckel syndrome is subdivided into ten types depending on the gene affected. The following are the subdivisions and the genes involved in each subdivision: 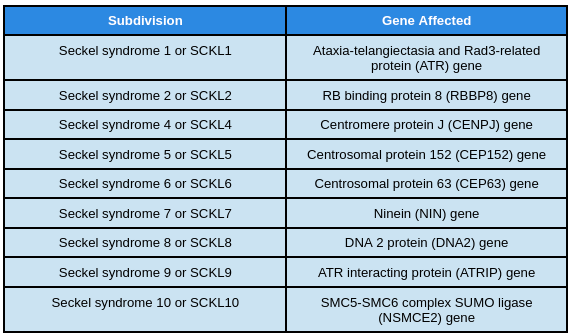 What Is the Incidence of Seckel Syndrome?

Ever since it was first diagnosed in 1960, there have been around 100 cases of Seckel syndrome, hence it is a rare genetic disorder.

How Is Seckel Syndrome Manifested?

Before birth, it causes reduced fetal growth resulting in low birth weight. After birth, manifestations of Seckel syndrome include reduced growth and delayed bone maturation. The following are the symptoms seen in Seckel syndrome:

What Are the Diagnostic Criteria for Seckel Syndrome?

How Is Seckel Syndrome Diagnosed?

Genetic counselors get to know the family history of the disease to determine the chances of acquiring this syndrome.

Microcephaly is an essential characteristic of Seckel syndrome, which can be identified by imaging tests. Two standard deviations of the mean value of age, gender, and ethnicity is determined for the child. If the occipitofrontal head circumference present at birth is less than this value, the diagnosis of Seckel syndrome is confirmed.

Gene mutations can also be identified by performing molecular genetic tests, thereby it helps in the diagnosis of Seckel syndrome. In a couple with a child with Seckel syndrome, antenatal molecular diagnosis can help identify the condition in the fetus.

Fetal growth retardation can be noted in the fetal ultrasound taken in the second trimester of pregnancy. But this can help detect only high-risk cases, and this method cannot diagnose low-risk patients.

How Can We Treat Seckel Syndrome?

Medical treatment is done for vascular disorders like pancytopenia, anemia, and acute myeloid leukemia. In terms of children who are mentally challenged, counseling and social support are needed for these children as well as their families.

Seckel syndrome is an inherited condition that poses physical and mental disabilities to the affected child. This leads to mental trauma to the family of that child. When you have a family history of the disease, it is essential to consult your doctor during pregnancy to detect antenatal deformities.

Do you have a question on Seckel Syndrome or ?