The New 'Super-Spreader' Strain of Coronavirus

A new variant of SARS-CoV-2, the virus that causes COVID-19, is spreading fast in parts of the UK. Read how this new variant can affect you.

Contents
Firstly, What Does Mutation Mean?
How Did SARS-CoV-2 Mutate?
What do We Know So Far About This New Strain?
Is This New Variant Similar to the South African Variant?
Is the New Coronavirus Strain More Dangerous?
How Will This Affect COVID-19 Testing?
Will this affect COVID-19 recurrence in patients?
Will COVID-19 Vaccines Work Against the New Strain of Coronavirus?
What Can We Do to Protect Ourselves Against This New Strain of Coronavirus?
Has SARS-CoV-2 Mutated Before? 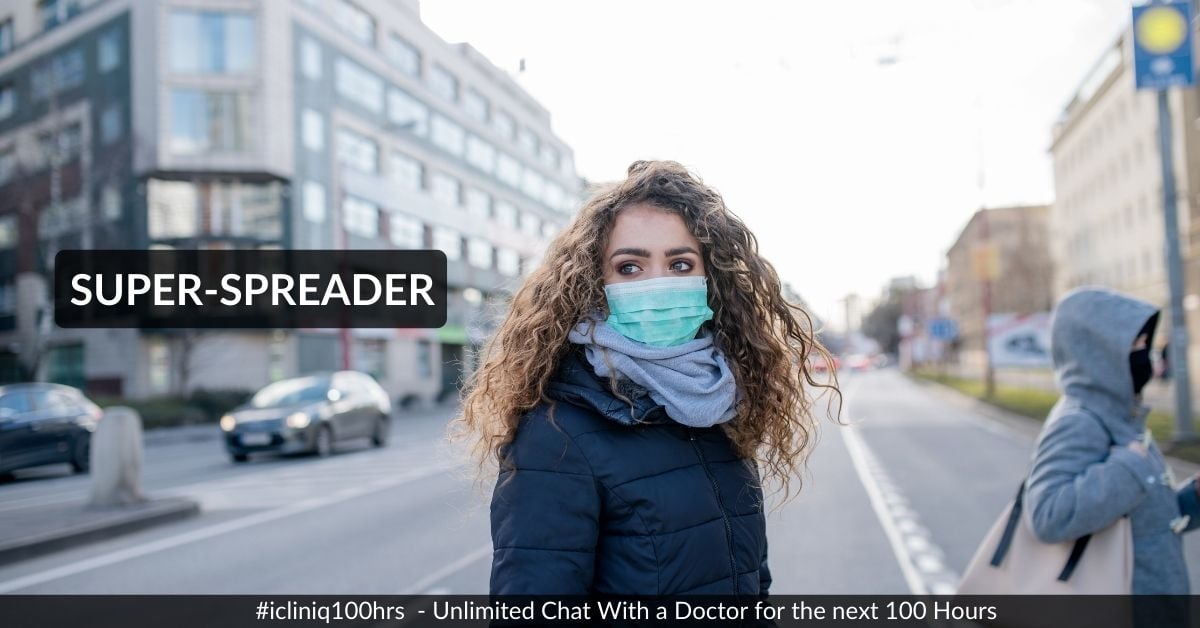 The novel Coronavirus (SARS-CoV-2), the virus that has claimed millions of lives worldwide in just a year, is said to have undergone a lot of mutations since it first emerged. Since the last few weeks, the UK (United Kingdom) is facing a rapid increase in COVID-19 cases, especially in South East England. This made scientists conduct extensive epidemiological and virological analyses. These investigations and studies of the viral genome identified that the majority of cases were due to a new strain of the deadly Coronavirus. This new variant was named iVUI-202012/01 (the first "Variant Under Investigation" in December 2020). The variant belongs to Nextstrain clade 20B, GISAID clade GR, lineage B.1.1.7. This new strain was identified to have multiple mutations in the spike protein and other genomic regions. We already know that viruses constantly mutate and change, leading to the emergence of new variants. But initial data carried out in the UK suggests that this new strain is possibly more transmissible than the variants that are already circulating. It is estimated to be up to 70 % more transmissible.

While this new strain is said to be more transmissible, there is still no evidence that suggests that it can result in increased infection severity. Some cases due to the new variant have been reported in Denmark, Netherlands, and Belgium too. With COVID-19 vaccines getting approved and showing positive results, the news of this new strain has resulted in panic and a lot of questions, such as - Will the vaccine work on this new strain? Is there an increased health risk? Will the treatment, isolation, and quarantine protocols change? We have tried to answer most of the questions about the impact of this new COVID-19 variant that has made the UK impose lockdowns and close its borders again.

Firstly, What Does Mutation Mean?

A change in a microorganism's genetic material is called a mutation. A virus, when it enters our body, makes millions of copies of itself and then infects others. Not all the copy it makes is identical. These small errors accumulate as the virus spreads and gets replicated again and again.

How Did SARS-CoV-2 Mutate?

All viruses mutate. The mutations in SARS-CoV-2 may be due to random errors occurring when the virus replicates in the body. This error can be due to antivirals or recombination (genetic shuffling). Signs of genetic shuffling have not been detected in this virus.

Most mutations that occur in a virus do not majorly impact the nature of the virus. Since the pandemic started, thousands of mutations were noted, but none altered the virus's ability to survive and reproduce. But sometimes, like in the case of SATS-CoV-2 iVUI-202012/01, a certain combination of mutations may work in favor of the virus, changing some of its original characteristics. Once if the mutation is favorable, viruses with that specific mutation increase in frequency.

As similar mutation patterns were seen in chronically COVID-19 infected patients with weak immune systems, scientists believe that chronic infection in a single patient might be the reason behind this mutation. Meaning the immune response was not strong enough to kill the virus, allowing it to evolve. This would explain the multiple mutations, but there is still no proof of this.

COVID-19 and the Use of Face Masks
COVID-19 and Other Seasonal Co-Infections
Is Coronavirus Lockdown Worsening Childhood Obesity?

The other possibility is the virus getting mutated in an animal and then infecting humans with the mutated virus. This was the cause of the emergence of a new variant in Denmark during transmission among mink that caused multiple spike protein mutations.

It is also possible that the variant emerged in a country with almost nil or very low viral sequencing. The chances of this are less as random mutations due to circulation of the virus does not explain the high proportion of mutations in the spike protein. Mutations to circulate for so long and going undetected is highly unlikely due to global travel patterns.

What do We Know So Far About This New Strain?

The new strain was noted to have 17 mutations (changes), including eight mutations in the outer spike protein, when compared to the original SARS-CoV-2 virus discovered in Wuhan, China, a year back. This new variant, called SARS-CoV-2 VUI 202012/01, is defined by multiple spike protein mutations (deletion 69-70, deletion 144, N501Y, A570D, D614G, P681H, T716I, S982A, D1118H) and mutations in other genomic regions. One of the mutations (N501Y) is located within the receptor-binding domain (a key part in the virus's spike (protein). As the spike protein plays a vital role in the virus entering our cells and multiplying, these changes in the spike protein may theoretically make the virus more infectious and might allow it to spread more easily between people. Primary results suggest that this variant is significantly more transmissible than previously circulating variants, with an increased reproductive number and increased transmissibility of up to 70%.

The mutations seen in this new strain is rather large in number when compared to other variants we have in circulation worldwide. The genetic profiles of this variant have also been sequenced in the UK, Denmark, Australia, and the Netherlands. The discovery of the new strain in a few countries does not reflect this virus's true distribution. This variant could exist undetected elsewhere, and only more genetic sequencing will help determine the extent of its spread. In the UK, this variant dominates existing versions and might be responsible for the rapidly increasing number of cases in some parts of the country.

Is This New Variant Similar to the South African Variant?

Similar reports emerged from South Africa about a mutated virus (501.V2) that is more virulent. In South Africa, the new strain, similar to the one found in the UK, appears to spread faster and has resulted in the second wave of COVID-19 infections. Almost 90 % of infections in South Africa are now reportedly due to this variant. This variant also has 17 mutations, but only one mutation is the same as the UK variant.

Viruses constantly mutate, and the emergence of new variants is expected and not usually a cause for concern. There is no evidence that suggests that this variant increases disease severity and mortality rates.

How Will This Affect COVID-19 Testing?

One mutation in the new variant affects one of the three genomic targets that is used in some PCR (polymerase chain reaction) tests, which means that the tests that target that specific area will show a false-negative result. This will affect the ability of some COVID-19 tests. But, PCR tests usually detect more than one genome target. So if one target is mutated, it will only partially affect the test, reducing the risk of false-negative results.

Will this affect COVID-19 recurrence in patients?

There is still no evidence that suggests that infection with SARS-CoV-2 VUI 202012/01 increases the possibility of reinfections.

Will COVID-19 Vaccines Work Against the New Strain of Coronavirus?

Scientists are carrying out experiments to see how effective the approved COVID-19 vaccines are against this new strain, and we do not know much about it as yet. The thing to be noted here is, COVID-19 vaccines stimulate a broad antibody response to the entire spike protein on the virus, so some mutations in the spike protein should not affect the efficacy. But, it is possible that we may reach a point where we might have to update our COVID-19 vaccines, similar to the influenza shots, to tackle the new strains at that time. This is all too hypothetical, and only genome sequencing and data sharing in the coming months will provide us the bigger picture.

What Can We Do to Protect Ourselves Against This New Strain of Coronavirus?

With such little evidence to indicate the extent of this new strain's spread, efforts should be made to prevent and control its spread as soon as possible. This includes:

Has SARS-CoV-2 Mutated Before?

SARS-CoV-2 has undergone roughly 4,000 mutations in the spike protein so far.

So it is difficult to say whether any particular mutation is important as soon as it emerges. Lots of testing is needed to understand the effects of such mutations.

Introduction: As of now, the tests that are commonly done to diagnose COVID-19, the infection with the new Coronavirus SARS-CoV-2, are polymerase chain reaction (PCR) and antibody testing. Both these methods have their advantages and limitations and use different kinds of samples to search for diff...  Read Article

Article Overview: Many people infected with the new Coronavirus have reported diarrhea, vomiting, nausea, and other gastrointestinal symptoms. To know more about these symptoms, read the article now. Read Article

The COVID-19 (COronaVIrus Disease-2019) outbreak, caused by the severe acute respiratory syndrome coronavirus (SARS-CoV-2), spread rapidly from China to almost the entire world, affecting millions of people across 199 countries. We are sure you all know by now that the hallmark signs of COVID-19 are...  Read Article

Article Overview: It is essential to stay active both physically and mentally during this COVID-19 pandemic. Read this article to know more. Read Article

Why Is There Pressure to Stay Active? The pressure to stay motivated and positive is not only arising in this particular situation. Stress is always there in the fast running world. But now, it seems to be much more than a normal level. Reading a lot of self-improvement strategies to stay active an...  Read Article

Do you have a question on Covid-19 or Covid-19 Pandemic?