Hemophilia A is a rare genetic blood clotting disorder. Read about the signs, symptoms, causes, diagnosis, and treatment. 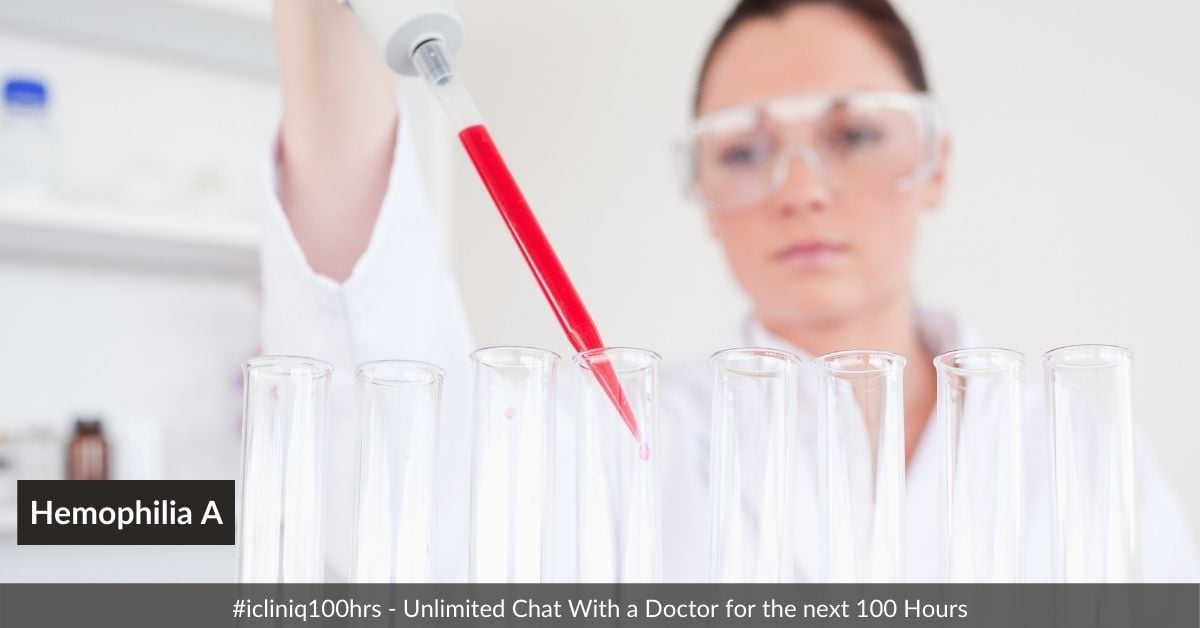 What Is Hemophilia A?

Hemophilia A, a subtype of hemophilia, is a rare genetic blood clotting disorder. The blood loses the ability to clot normally in hemophilia A patients. This results in profuse or prolonged bleeding, either in an external wound or internally. In Hemophilia A, there is a deficiency of the factor called factor VIII. This factor is needed to form clots and stop bleeding. This disorder can be mild, moderate, or severe, depending on how less the factor VIII is in the blood. More than 50% of people with hemophilia A have the severe form. In mild cases, no special treatment is needed, and bleeding can be stopped at home. Even patients with severe illness can lead a comparatively normal life with some precautions and the right treatment. As it is a genetic condition, two-thirds of the affected patients have a positive family history, but one-third do not have any family history of this disease.

In patients with severe clotting factor deficiency, profuse bleeding occurs even after a minor injury or sometimes occurs spontaneously without any injury. The patient can bleed into the joints, brain, and other vital organs, resulting in fatal complications. As there is no spontaneous bleeding in patients with milder forms, the condition is only diagnosed after a dental extraction or some serious injury. Specific laboratory tests that check the levels of factor VIII are used to diagnose hemophilia A. Treatment is done by replacing the clotting factor VIII. As this condition is caused by a gene mutation on the X chromosome, it mainly affects males (they only have one X chromosome). In extremely rare and severe cases, the lifespan is affected due to rare complications of other associated conditions.

What Are the Other Types of Hemophilia?

Hemophilia A is around four times more common than hemophilia B, and more than 50% of patients with hemophilia A have the severe form.

What Are the Signs and Symptoms of Hemophilia A?

As mentioned before, hemophilia A patients will experience symptoms depending on how severe the factor VIII deficiency is.

Mild Hemophilia A - The signs and symptoms include prolonged bleeding only after:

People with mild hemophilia usually get diagnosed only if they face any of the above situations as adults.

Moderate Hemophilia A - Such people exhibit the following signs and symptoms:

Sometimes, bleeding can even occur in the brain, which can result in the following symptoms:

This is a medical emergency, and immediate medical help is necessary to prevent death.

What Causes Hemophilia A?

How is Hemophilia A diagnosed?

The diagnosis of hemophilia A is made through clinical symptoms and laboratory testing. You might have to get the following tests done:

How Is Hemophilia A Treated?

Treatment depends on the severity of hemophilia A, the patient’s age, and various other factors. Hemophilia A patients might need regular or prophylactic treatment to prevent bleeding, or treatment is done at the time of bleeding episodes.

The primary treatment is called replacement therapy. Here the deficient or absent clotting factor is replaced. This therapy works in most patients, but in some, the body rejects it. In such cases, different sources for factor VIII or different amounts might be tried. The factor is introduced in the bloodstream through an IV (intravenously). The other treatment options include:

Apart from these, some home remedies can help prevent severe complications:

What Are the Possible Complications of Hemophilia A?

The following are the possible complications of hemophilia A:

To know more about hemophilia A, consult a hematologist online now.

Article Overview: Hemophilia is a rare genetic blood disorder, that results from low levels or absence of clotting factor VIII or IX. Read the article to know the signs, symptoms, causes, and treatment. Read Article

What Is Hemophilia? In people with hemophilia, a rare genetic blood disorder, the blood fails to clot normally as there is a deficiency of clotting factors or blood-clotting proteins. There are 13 known blood clotting factors, and hemophilia patients have low levels of either factor VIII or factor ...  Read Article

Do you have a question on Antifibrinolytics or Bruise?