Hemophilia is a rare genetic blood disorder, that results from low levels or absence of clotting factor VIII or IX. Read the article to know the signs, symptoms, causes, and treatment. 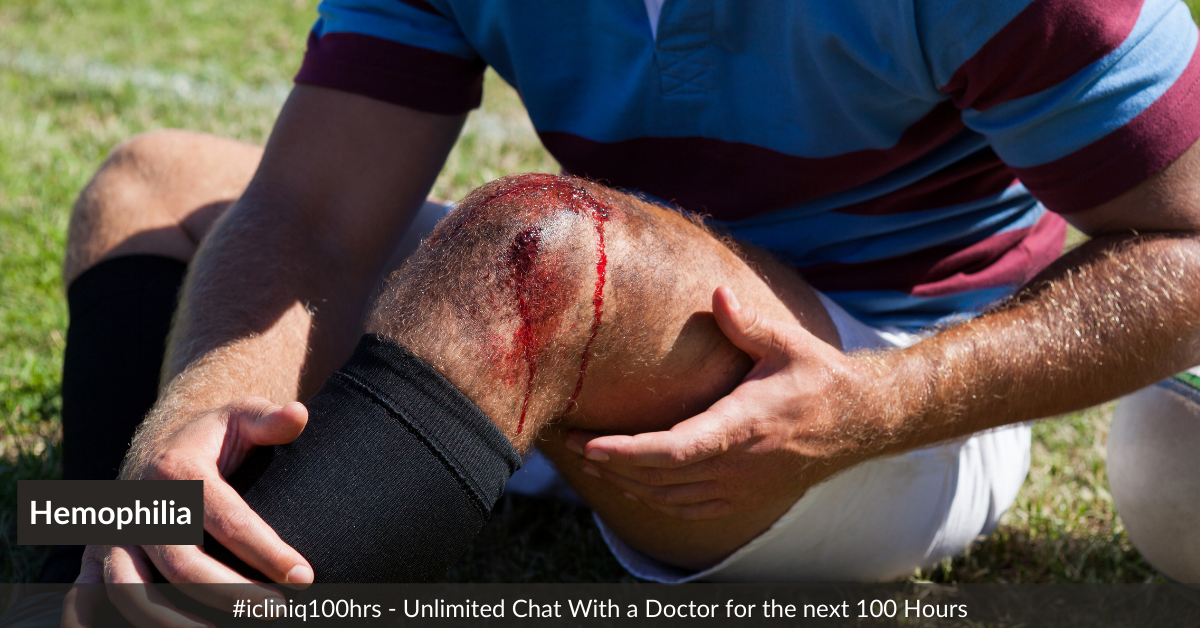 In people with hemophilia, a rare genetic blood disorder, the blood fails to clot normally as there is a deficiency of clotting factors or blood-clotting proteins. There are 13 known blood clotting factors, and hemophilia patients have low levels of either factor VIII or factor IX. These clotting factors help platelets in the blood to aggregate and form a clot. A lack of clotting factors makes such people bleed for a prolonged time after an injury than usual. Depending on how severe the deficiency is, the symptoms vary. Usually, small cuts do not cause many problems, but in extreme cases, spontaneous internal bleeding, commonly in the elbows, knees, or ankles, is seen. Such internal bleeding can damage the internal organs and result in fatal complications.

Only 1 in 10,000 individuals is affected by this disease. Proper treatment is needed to prevent severe bleeding in pregnant women during the late stages and after delivery. Hemophilia often resolves with appropriate treatment, but there is no cure as it is genetic. Treatment is done by the transfusion of the deficient clotting factor.

What Are the Types of Hemophilia?

The following are the three types of hemophilia:

The other types of bleeding disorders include:

What Are the Signs and Symptoms of Hemophilia?

As mentioned before, the severity of symptoms depends on how severe the factor deficiency is. Mild deficiency can result in prolonged bleeding only after an injury or trauma. But if the deficiency is severe, you may bleed spontaneously without any reason. The other common signs and symptoms (especially in children) include:

Sometimes, bleeding can occur inside the brain after a slight bump to the head. It can result in the following symptoms:

Bleeding into the brain is a medical emergency. If your child is exhibiting such symptoms, rush him or her to the emergency room. The inability to stop a brain bleed can result in death.

Hemophilia occurs due to a change (mutation) in one of the genes that provide instructions for making the clotting factor proteins, which is needed to form a blood clot. The affected gene is located on the X chromosome. Females get one X chromosome from each parent, and males get an X chromosome from their mothers and Y chromosome from their fathers. As males only have one X chromosome, if they inherit the mutated chromosome, they show symptoms of hemophilia. But in females, inheriting one mutated gene does not usually cause symptoms (some women might show signs with only one X chromosome mutation), but they become carriers. In females, hemophilia symptoms are similar to males when both the X chromosomes are mutated. This change or mutation inhibits the proper functioning of the clotting protein, or in some cases, it is totally absent. Females who are carriers might pass this mutated X gene to her children (mainly boys).

How Is Hemophilia Diagnosed?

If hemophilia runs in your family, make sure you inform the doctor. It is possible to check if the fetus has hemophilia during pregnancy, but the test poses some risks to the baby. Or the other option is to get the baby tested as soon after delivery. In adults and children, blood tests can be done to detect a clotting-factor deficiency.

Only mild cases get detected during adulthood, maybe before surgery or after extraction. Severe cases usually get diagnosed within the first year of life.

How Is Hemophilia Treated?

4) Desmopressin - It is a hormone used in some mild types of hemophilia. It stimulates the body to release more clotting factors. This hormone is either given as a nasal spray or through the vein.

5) Fibrin Sealants - When a wound is bleeding profusely, fibrin sealants are directly applied to the injury to promote clotting and healing. They are commonly used in dentistry.

6) Hepatitis Vaccinations - As these patients need transfusions of blood clotting factors, it is better to get vaccinated against Hepatitis A and B, even though blood products are screened.

7) Physiotherapy - If internal bleeding has affected the joints, physiotherapy can help. Severe damage to the joints needs surgery.

What Are the Possible Complications of Hemophilia?

Of the two major types of hemophilia, deficiency of anti-hemophilic factor or clotting factor VIII causes hemophilia A, and hemophilia B is caused by factor IX or Christmas factor deficiency.

Is Hemophilia a Severe Condition?

Hemophilia is not completely curable; however, the symptoms can be managed to prevent further complications. Effective treatment involves controlling bleeding by multiple weekly injections, which have to be taken lifelong and are expensive.

Can Hemophilia Occur in Women?

Hemophilia occurs in women when a genetic mutation occurs in both the X-chromosomes. Because of this genetic trait it follows, hemophilia is extremely rare in females.

Is Hemophilia a Hereditary Condition?

Alteration in the genes brings about hemophilia, which is passed from the parent to the child and occurs through generations. It is an inherited disorder and is present from birth.

At What Age Is Hemophilia Diagnosed?

Generally, hemophilia is detected during the early stages of life. According to the statistical report of the center for disease control and prevention of the United States, the average age of diagnosis of mild hemophilia is 36 months, and moderate hemophilia is eight months. The severe form of hemophilia can be diagnosed at one month of age.

Is It Possible to Have a Baby With Hemophilia?

Females who are carriers do not have many complications during pregnancy, and it is normal. Clotting factor VIII usually rises during pregnancy, but factor IX does not increase. Therefore, it is essential to check for the clotting factors level in blood during the third trimester when the factors are at their maximum levels. Based on this, preventive measures must be taken to minimize the risk of excessive bleeding and its complications.

How Is Hemophilia Best Treated?

How Can We Prevent Hemophilia?

As hemophilia is an inherited disorder, it cannot be wholly prevented. However, it can be identified earlier by prenatal diagnosis, molecular genetic testing. The following measures can avoid complications of hemophilia:
- Regular exercise.
- Avoiding blood thinners.
- Maintaining good oral hygiene.
- Avoiding injuries.
- Avoiding pain-relieving medications like Aspirin and Ibuprofen.

What Is the Effect of Hemophilia on the Menstrual Cycle?

In women with hemophilia or other bleeding disorders, there is an excessive flow of menstrual bleeding, which can be controlled by birth control medications or by boosting the factor VIII and Von Willebrand factor by using Stimate nasal spray.

Genetic mutation in the genes of the X chromosome, which are responsible for clotting, results in hemophilia. Because of this, there are missing clotting factors or reduced function of clotting factors.

What Are the Foods to Be Taken in Hemophilia?

For hemophilia, it is good to take calcium and iron-rich foods like low-fat milk, cheese, yogurt, etc., cereals, orange juice, and soy milk that contain calcium, almonds, beans, and green leafy vegetables like spinach and broccoli.

Can Hemophilia Be Left Undiagnosed?

Mild cases of hemophilia may be left undiagnosed unless and until an injury or need for surgery occurs.

How Can We Stop Bleeding in Hemophiliacs?

Clotting factor concentrates should be injected into the blood as soon as bleeding occurs in a muscle or joint. However, in mild and moderate cases of hemophilia, Desmopressin Acetate helps in arresting the bleeding. The first measures include RICE which is an acronym of rest, ice, compression, and elevation. These are the initial steps to be followed to slow down the bleeding.

Does Hemophilia Worsen With Age?

Complications of hemophilia like joint disorders, intracranial hemorrhage, and the development of inhibitors are known to increase with age, worsening the condition.

Hemophilia is an inherited disorder that results in excessive bleeding, which, if not appropriately managed, can lead to fatal complications.

What Are the Organs That Are Affected by Hemophilia?

What Is the Reason for the Rare Incidence of Hemophilia in Females?

For hemophilia to occur in females, it should inherit two defective genes, one from each parent, which is extremely rare.

How can I manage sore throat and difficulty in swallowing?

Query: Hello doctor, I am 19-years-old female. I am pretty healthy and have an average weight. I had a sore throat for two days and it is extremely hard to swallow due to swelling to the point I can barely eat solid food. It is not scratchy, and I do not have a cough or fever. I went to the urgent care, ...  Read Full »

Do you have a question on Hemophilia or Types Of Hemophilia?