Osteonecrosis of the Jaw (ONJ)

Osteonecrosis of the jaw (ONJ) is a condition where the jaw does not heal and the bone cells die out causing jaw pain. Learn about its causes, risk factors, treatment, and prevention. 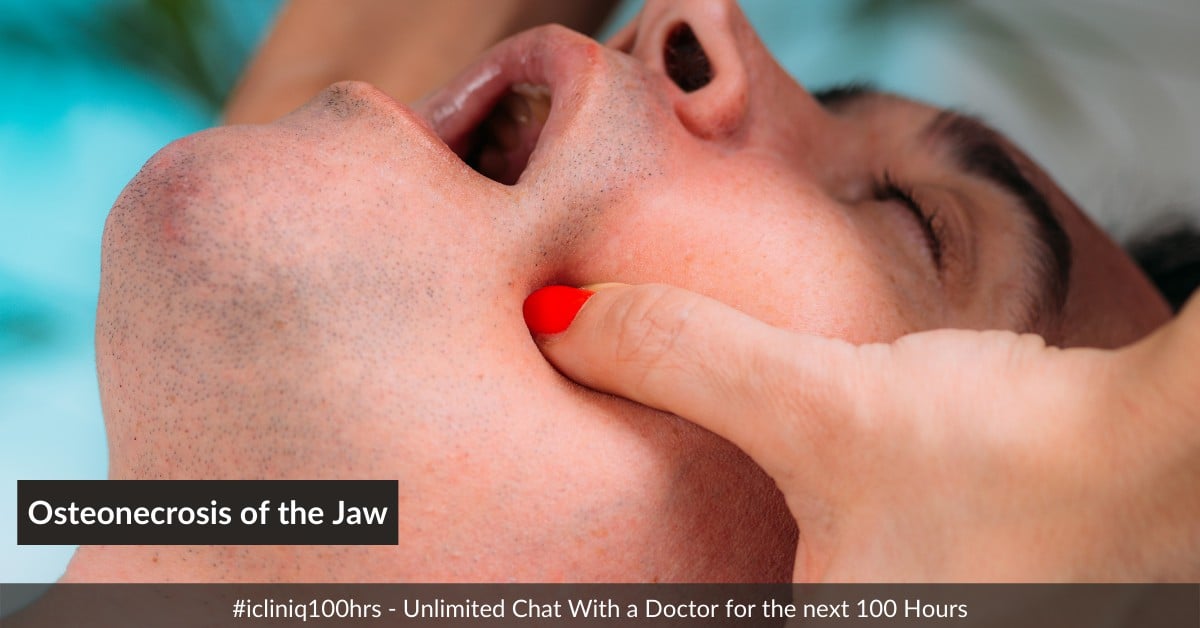 What Is Osteonecrosis of the Jaw?

Osteonecrosis of the jaw, also referred to as ONJ, is a condition where the jaw does not heal, and the bone cells die out, causing jaw pain. There is also a probability of ONJ occurring in individuals on certain medications like bisphosphonates and serious conditions like cancers and bone infections. How will your dental surgeon help you address this issue? Let us explore this condition in detail.

As the name is suggestive of this condition, “osteo” means bone, and “necrosis” means death. When the jaw bone is exposed to certain causative risk factors and starts starving because of lack of blood, the bone cells weaken first and then die out, causing pain. This may be only a specific area of the jaw that does not heal (poor healing - for example, as in a case of extracted tooth socket that does not heal). The area affected by ONJ will not be covered by gums and thus exposed to the oral environment without receiving blood supply. This causes the death of bone cells. Apart from non-healing dentoalveolar sites (non-healing tooth socket), cases of osteonecrosis of the jaw is reported even on bony growths (traumatized palatal and mandibular tori), in the roof of the mouth (palate) or the inner parts of the mouth.

What Can Cause Osteonecrosis of the Jaw?

Here are some of the factors that are risk-prone for the patient to develop osteonecrosis of the jaw:

1. Trauma or injury to the jaw bone.

2. Radiation therapy to the head and neck (causing a disorder similar to ONJ called osteoradionecrosis).

3. Bone infections (certain bone infections like osteomyelitis are often confused with ONJ. Hence diagnosis should be accurate by the oral surgeon).

4. People on bisphosphonate drug therapy (intravenous route given in osteoporosis and certain forms of cancer and infections).

7. Often, patients with apparently no medical reasons have also been reported with ONJ as it would be a result of risk factors such as older age, diabetes, gum disease (gingivitis and periodontitis), or smoking.

What Are the Risk Factors for Osteonecrosis of the Jaw?

ONJ is caused majorly by these risk factors:

A. Bisphosphonate Related Osteonecrosis of the Jaw (BRONJ)

Though bisphosphonates are successfully used in all these conditions, it can reportedly result in ONJ if the patient is undergoing any dental procedure, for which preventive measures can succeed. Patients on bisphosphonate therapy are prone to having this condition as they are administered in these diseases and disorders by intravenous route. Oral route bisphosphonate absorption is considered poor. Research also indicates that most ONJ cases have occurred in cancer patients with coexisting morbidities like diabetes and infection.

Management - Though some dental surgeons and physicians are of the opinion that bisphosphonate drug therapy need not be discontinued during or before a dental procedure like tooth extraction, some practitioners advocate a temporary discontinual of the treatment while undergoing dental surgery. In either case, maintenance of oral hygiene holds the key to preventing osteonecrosis of the jaw in patients on bisphosphonate treatment.

B. Osteoradionecrosis of the Jaw

This is a form of ONJ occurring in patients receiving radiation therapy. Most frequently, chemo-radiation therapies destroy the small blood vessels that circulate the blood in the jaw bone. A reduction in these blood vessels will result in a lack of the ability of bone to heal by itself (hypovascularization).

Management by Dental Surgeon - In cases of osteonecrosis due to radiation, prior to the radiation therapy, all undesirable or highly mobile teeth can be removed. Periodontal or gum health can be improved in such cases along with instituting fluoride therapy.

Management by Physician - Hyperbaric oxygen therapy (HBO) is a common treatment modality for cancer patients, which has proved useful in managing ONJ caused by radiation too. Patients may be advised Penicillin therapy, but the evidence suggests hyperbaric oxygen is much more effective in treatment.

How Is Osteonecrosis of the Jaw Diagnosed, Treated, and Prevented?

There is no definitive test to detect ONJ, but the presence of the aforementioned risk factors shows the patient would be prone or may have developed this condition. Physicians who treat musculoskeletal disorders like rheumatologists, orthopedics, and endocrinologists are the best advisors on when and how to continue or discontinue the medications prescribed by them before or after a dental procedure.

The dental surgeon may prescribe oral-mouth rinses, analgesics (painkillers), or antibiotics to treat ONJ conservatively. Awareness to visit your local dentist and maintenance of regular oral hygiene and dental care is a priority to recognizing the symptoms or onset of ONJ. Patients should also inform their dentist about the medications they are taking for bone disorders, infections, or cancer treatment (as the drugs used in treating these diseases may be highly potent).

Another key to preventing ONJ by the dental surgeon is to save teeth with a better prognosis (by root canal treatment) as much as possible in such cases who are prone to this condition. Also, as these individuals at risk are further weakened in immune response, full mouth extractions should be avoided at a stretch. Gum surgeries (periodontal surgery) can also be considered of less importance in these individuals, as it can worsen the risk of healing. Dental implants can be carried out in patients with bisphosphonate therapy with antibiotic prophylaxis. Evidence suggests that it would not be risky or have an adverse impact on the jaw.

Regular visits to your dental surgeon and proper oral hygiene and dental care are of pivotal importance in preventing ONJ, especially in the elderly and smoking population. Individuals who are on drug therapies for bone issues can consult the physician before undergoing routine dental procedures or extractions, and the dentist can definitely guide the patients by instruction and procedure both to prevent the risk of ONJ.

Osteonecrosis of the jaw initially causes the pain associated with altered sensation, mobility of teeth, non-healed tooth socket, mucosal swelling, numbness of the jaw, discharge of pus, redness, ulceration, loosening of teeth, infection in the gums, and an area of exposed necrotic bone is seen. A considerable amount of necrosis of bone, periosteum, and overlying mucosa persists. If the necrosis is present in the maxilla, close involvement with the maxillary sinus presents as sinusitis.

Is Osteonecrosis of the Jaw Curable?

Osteonecrosis of the jaw causes severe inflammation of the bone leading to the loss of bone. Osteoclasts perform the function of bone destruction, which increases the risk of preventing fractures due to the loss of bone density. It can be cured with bisphosphonates, a group of drugs that encourage the process of programmed cell death of osteoclasts. But an increased dose of bisphosphonate use can also disrupt the normal function of the bone.

How Long Does Osteonecrosis of the Jaw Last?

Osteonecrosis of the jaw involves maxillary and mandibular bone destruction. Bisphosphonates, pharmacologically also known as diphosphonates, is a group of drugs that are seen to inhibit osteoclastic activity in bone and prevent bone destruction of this oral lesion. The exposed bone lasts for at least eight weeks with associated pain which may be asymptomatic initially.

Can Osteonecrosis of the Jaw Cause Death?

What Are the Three Stages of Osteonecrosis of the Jaw?

Which Medication Is Related to Causing Osteonecrosis of the Jaw?

Bisphosphonates, when taken orally or through an IV infusion, more than half of the drug is excreted by the kidney, and the bones rapidly absorb the remaining. This drug has a great affinity for the bone and can remain in the bone for years. Although it is a very beneficial drug for bone diseases, the hazardous complication is bisphosphonate-related osteonecrosis of the jaw (BRONJ). The name implies its deposition in the bone causes a large amount of necrosis and bone loss in the jawbones. It is due to the high doses of bisphosphonates, as in the case of cancer patients.

What Are the Tests Done to Diagnose Osteonecrosis of the Jaw?

The radiograph does not show any changes immediately. Extensive involvement of bone appears in the radiograph as mottled bone. Sclerosis and sequestration of the bone appear along with the widening of the periodontal pocket space. In the biopsy, a non-vital bone devoid of osteoclasts and osteoblasts is seen. The fungal infection may be noted in some cases. MRI (magnetic resonance imaging) shows decreased intensity in T1-weighted images, and CT scan shows sequestration of the bone with periosteal reaction.

Can you reverse avascular necrosis?

Query: Hi doctor, I have pain in thighs, hip joints and legs for more than a year. Reports indicate avascular necrosis stage 3. Doctor has recommended me hip replacement. I am really scared of this. Because I did a lot of research on internet about this. I got to know a lot of restriction and risk of dislo...  Read Full »

Article Overview: Do you want to know the cause of your hip pain? Read the article to know about the possible causes, associated symptoms, diagnosis, and treatment options for hip pain. Read Article

Hip Joint: The joint where the tip of the femur (thigh bone) joints the pelvis in a socket (acetabulum) is called the hip joint. Cartilage covers both the femur bone and socket in this joint. Synovium, which is the tissue lining the joint, also surrounds the hip joint. This synovium produces synovi...  Read Article 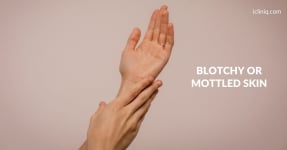 Do you have a question on Jaw Pain or Radiation Exposure?