Amphotericin B and Antifungal Agents for Black Fungus Treatment

In addition to the use of Amphotericin B, which is the mainline drug therapy for mucormycosis or black fungus, other new age antifungal drugs have been implemented to success. Read the article to know about the treatment strategies through these agents and by surgical resection.

Contents
Amphotericin B
What Are the Side Effects or Reactions Caused by AmB?
What Is the Adjuvant Therapy for Black Fungus? 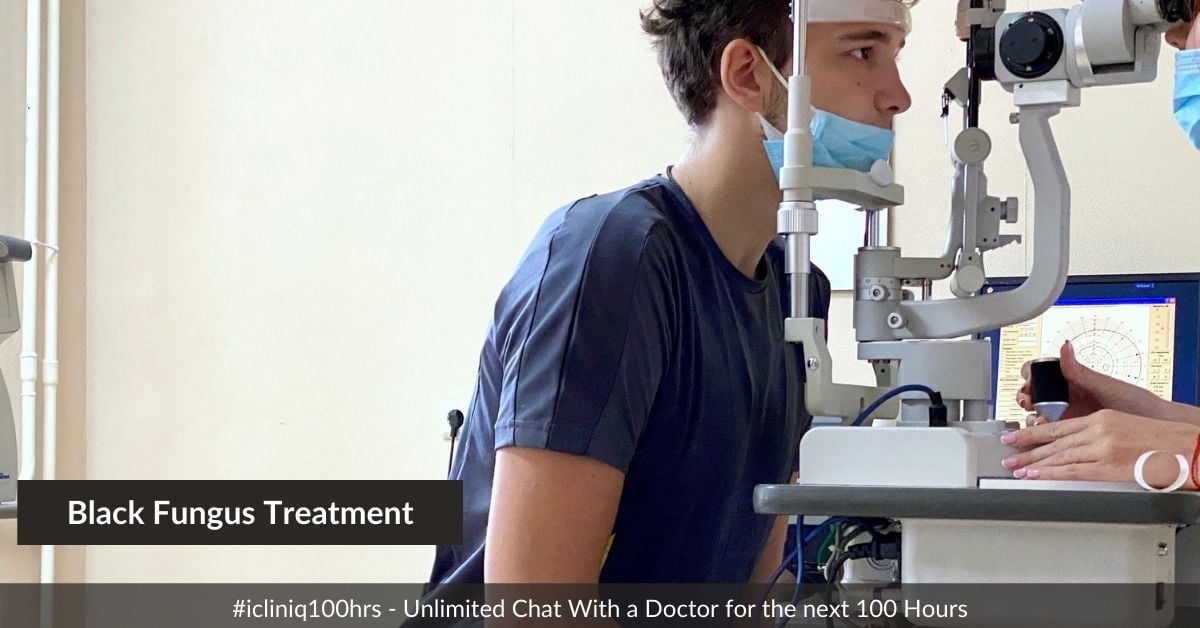 Mucormycosis or black fungus infection treatment involves a decision-making process by physicians and surgeons. It is based on clinical, laboratory, and imaging signs and symptoms of the patient considering the recovery status or prognosis. The duration of treatment is also not standardized as the therapy will be continued till the signs or symptoms of this disease cease. In general, the primary therapy involves the administration of Amphotericin B (the liposomal formulation -LAmB associated with a 67% survival rate) apart from new triazoles like Posaconazole and Isavuconazole as a supportive antifungal agent.

The route of administration of this antifungal drug is intravenous (IV route), and the bioavailability of this drug is 100 %. Pharmacokinetically it has a half-life elimination of 24 hours initially and the second phase elimination after two weeks. Clinicians use the lipid formulation of Amphotericin B (Amphotericin B deoxycholate) to deliver high dosage in mucormycosis patients and to avoid nephrotoxicity, which may be one of the adverse effects of AmB. Amphotericin B lipid formulation hence does not penetrate the kidney or achieve a measurable concentration in urine. The usual starting dose is 5 mg/kg daily of liposomal Amphotericin B or Amphotericin B lipid complex. The dose may be increased to as high as 10 mg/kg daily in an attempt to control the spread of infection in the patient.

Amphotericin B binds with ergosterol, a component of the fungal cell membrane, and causes a rapid leakage of ions like Na+, K+, H+, forming membrane pores and eventually cell death. Evidence suggests that the oxidative stress and bimolecular complex created by the AmB molecules have a potent action aiding in fungal cell death.

What Are the Side Effects or Reactions Caused by AmB?

The liposomal formulation of AmB has minimized nephrotoxic effects, but other effects like skin reactions, electrolyte imbalances in people with hepatic conditions (hepatotoxicity or fulminant liver failure), circulatory side effects of anemia or blood dyscrasias, cardiac arrhythmias have been reported by the administration of AmB. In case of these side effects, the Healthcare provider or physician should be available immediately to attend to the patients in an emergency or in the case of anaphylaxis reaction to the patient. With the use of intravenous injection of AmB, the common side effects are:

The less common or rare side effects are:

Triazoles mainly act by depleting ergosterol from the fungal cell membrane. Among these agents, antifungals like Itraconazole, Fluconazole, Voriconazole have limited or ineffective action against Mucorales species causing mucormycosis. Oral formulations of newer azoles with activity against Mucorales such as Posaconazole and Isavuconazole can be used in the long-term therapy of mucormycosis after the initial IV treatment.

Posaconazole - It is an azole drug that has received approval from the Drug controller general of India (DGCI) for use in black fungus cases. AIIMS and ICMR have also advocated the usage of this drug as it has minimal potential for causing nephrotoxicity. Its increased tolerability profile makes Posaconazole a safe and effective drug for managing black fungus.

Isavuconazole - In the United States and Europe, it is a widely approved drug for the treatment of mucormycosis when Amphotericin B is not considered feasible because of side effects. It is available in both intravenous and oral formulations with a loading dose of 200 mg three times a day for two days and 200 mg daily thereon. It is considered a broad spectrum and biologically safe azole agent with an important role in long-term treatment.

What Is the Adjuvant Therapy for Black Fungus?

In combination with the above antifungal drugs used in the treatment of black fungus or mucormycosis, Flucytosine drug administration, Hyperbaric oxygen, immune augmentation strategies, and granulocyte transfusions have also been effective in patients undergoing immunosuppressive therapy or immunosuppressed cases. In selected patients, positron emission tomography or computed tomography scans have an important role in clearly distinguishing the radiographic features of an active black fungus or mucormycosis infection in any form. These adjunct therapies are discussed below:

Flucytosine: The synergistic action of this drug in combination with Amphotericin B or the triazole agents have studied both invivo and invitro and most often used successfully as a combination therapy with the antifungal agents for serious candida infections.

Hyperbaric Oxygen: The increased oxygen pressure associated with the use of hyperbaric oxygen has evidently been shown to increase the functionality of neutrophils (the wide variety of white blood cells that are the line of defense in our body). When antifungal drugs like AmB or Isavuconazole, or Posaconazole, are used to treat mucormycosis, the simultaneous pressure achieved by high oxygen saturation inhibits fungal growth, effectively aiding in wound healing. In diabetic patients with sinusitis and in cutaneous forms of mucormycosis (affecting the skin), hyperbaric oxygen therapy has been of immense benefit.

Granulocyte Transfusions: They have also proved effective in immunosuppressed patients but with unclear success rates as some cases have shown risks for inflammatory lung injury as a result of transfusion. Similarly, statins with invitro and invivo activity in the lab against Rhizopus spp fungi are also considered as an alternate therapy but with limited evidence in a few cases that have been successful.

Immune Augmentation Techniques: Immune augmentation techniques like administration of macrophage colony-stimulating factor or interferon Y (gamma) are administered to success by some physicians based on in-vitro studies and case reports.

Treatment strategies and duration for mucormycosis infections will vary based on the physician's advice and the extent of the infection in the patient. Timely administration of Antifungal agents-liposomal Amphotericin B or Isavuconazole or Posaconazole along with adjunct therapy is the need of the hour for patients suffering from the black fungus infection.

My dentist did not wear gloves during extraction. Is this practice safe?

Query: Hi doctor, I took my mother to a dentist. She hit the tooth hard with a hammer and chisel to remove the second molar of upper jaw. She has experience as a dentist for 30 years; still she does not wear gloves. I am wondering, is this practice safe? My mother cried during the procedure, but the dentis...  Read Full »

Query: Hi, I am suffering from balanitis since last month. I am using an antifungal cream (candid B) to avoid it. Till the time I use antifungal cream all rashes/infection disapper, but once I stop applying the cream all symptoms start again.  Sympoms are: Red skin around head of penis and itchiness aft...  Read Full »

Do you have a question on Antifungal or Infection Control?