Persons with borderline personality disorder are very dramatic, impulsive, and emotionally unstable. They stand on the border between neurosis and psychosis. 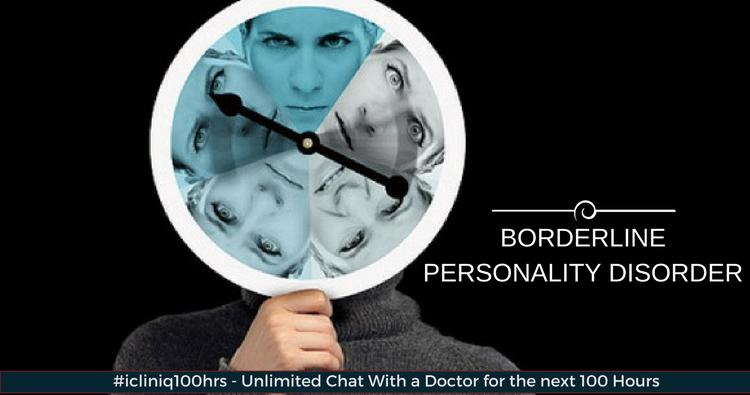 Borderline personality disorder is a mental illness where the person has difficulty handling their emotions appropriate to social standards. Even minor situations can trigger major reactions. They have unstable mood, behavior, object relations, and self-image. They stand on the border between neurosis and psychosis. A person with neurotic illness will have an insight into his illness. He understands that he has some illness and that he should seek medical help, while a person with psychotic illness does not have any insight into his illness. He has lost touch with reality and usually, they do not seek medical help.

Over the years, the different names that have been given to this disorder are:

These persons have an extremely unstable psychic organization. They quickly become attached to somebody and easily make friends. They have a problem with their identity and cannot understand what life means to them. So, they are dependent on others and need emotional support. When they become dependent on others, their expectations about them go very high and when that person tries to move away from them, they have an emotional breakout. They try to convince that person to live with them and can do whatever they want.

Related Topics
I have white patches in the throat and reddened soft palate. Is it oral cancer?
Is it normal to have white discharge after unprotected intercourse?
Is uncontrolled anger suggestive of bipolar or borderline personality disorder?

On one occasion they may say that you are a very nice person and identifies with you but when there is a conflict, they devaluate you in front of others. They are very impulsive as given in the symptoms.

They give repeated suicidal threats, make suicidal gestures and try to gain attention. They often feel that their life is empty. One moment, they may be happy but another moment they are sad and suicidal. Sometimes, they may become paranoid whenever there is an emotional breakout.

Some psychiatrists call this personality 'black and white phenomenon' because of the sudden changes and fluctuations in mood, emotions, behavior and they are usually at an extreme level. Functionally, patients with borderline personality disorder distort their relationships by considering each person to be either all good or all bad.

Also, they use a defense called as splitting. Meaning, persons towards whom the patient's feelings are undecided are divided into good and bad. For example, in an inpatient setting, a patient may idealize some staff members and uniformly disparage others. This defensive behavior can be highly disruptive in a hospital ward and can ultimately provoke the staff to turn against the patient. When staff members anticipate the process, discuss it at staff meetings, and gently confront the patient with the fact that no one is all good or all bad, the phenomenon of splitting can be dealt with effectively.

Genetics seems to play a great role in causing borderline personalities. A person with a close family member who has this disorder is much likely to have it too.

Also, this disorder is linked to a history of abuse, neglect or separation early in life. In young adulthood, some situations, people and scenarios trigger the development of this personality in them.

What Is the Cause of Borderline Personality Disorder?

What Are the Triggers for Borderline Personality Disorder?

The various triggers for a borderline personality disorder are:
- Criticism.
- Temporary or permanent separation from their loved ones.
- Loneliness.
- Lack of love and sex.
- Poor interpersonal relationship.
- Lack of validation.

How Can You Identify if the Person Is Having Borderline Personality Disorder?

It is difficult to identify a person with a borderline personality disorder. The diagnosis requires help from highly qualified professionals. Mere judging of the disorder by evidencing a few characters might not be appropriate and might result in misdiagnosis of the condition.

What Is the Hardest Personality Disorder to Treat?

A borderline personality disorder person will look normal and lovable. They might behave in a kind manner to others as they always long for love. The abnormal behaviors expressed by them can only be identified in a long-term relationship with them. They do not express any abnormal changes in physical appearance.

It Is Easy to Calm Someone With BPD?

No, it is not easy to calm someone with BPD. An attempt to calm a person with BPD might require continuous efforts in a kind manner. The attempt might become successful and unsuccessful, depending on the mood of the individual. If the patient achieves reassurance from their loved ones, then it is easier to calm these patients.

Do Borderlines Get Worse With Age?

The borderline disorder does not get worse with age. In fact, it is known to decrease in severity as the person matures. The worst effects of borderline patients are experienced during their teenage and earlier part of the '20s. If it is a female patient, then the severity is more during the menopausal period.

No, borderline people do not lack empathy. Their extreme sense of importance towards their own feelings makes them appear self-centered. This self-centered attitude might make them express empathyless behavior.

Can You Live a Normal Life With Borderline Personality Disorder?

Yes, it is possible to live a normal life with a borderline personality disorder. When the patient's emotional roller coaster reaches the peak, it is difficult to manage borderline patients' negative outcomes. It is highly unpredictable to understand their mood status, and so there are higher possibilities for normal life to get disrupted from them.

What Is the Best Medication for Borderline Personality Disorder?

Medications are given for the borderline patients to stabilize the mood changes. The most recommended medications are listed below:
- Valproate.
- Lithium carbonate.
- Carbamazepine.
- Lamotrigine.

What Should I Do if I Have Borderline Personality Disorder?

The first thing you have to do when you have borderline personality disorder is to accept the condition. Proper psychotherapy treatment is necessary for improvement in the mental health of borderline patients. Dialectical behavioral therapy is the most recommended method for these patients.

How Serious Is Borderline Personality Disorder?

A borderline personality disorder is a serious condition compared to other conditions because patients engage in self-harm behavior. The extreme anger expressed by the patients might provide unsafe surroundings both for the individual and the others. It is necessary to get help from a psychologist as soon as possible.

What Happens if BPD Is Left Untreated?

What is the heritability of schizophrenia?

Query: Hello doctor, I am a 28-year-old male in good health. I have suffered bouts of depression for the past few years along with anxiety and OCD. I am on Zoloft every day and am doing well for the most part. I am staying active and keeping busy. The reason why I ask this is, that on my mother's side the...  Read Full »

Is there a definitive way to know if I have a borderline personality disorder or bipolar disorder?

Query: Hello doctor,Is there a definitive way to know if I have a borderline personality disorder or bipolar disorder? Two years ago, I was diagnosed with BPD, but I met with a psychiatrist who says I do not sound at all like I have BPD, but I instead sound bipolar. Is there a way to test which it is? Or i...  Read Full »

Do you have a question on Schizophrenia or Borderline Personality Disorder?