This outbreak of COVID-19 has caused depression for many. Read this article to know more about the depressive states of COVID-19. 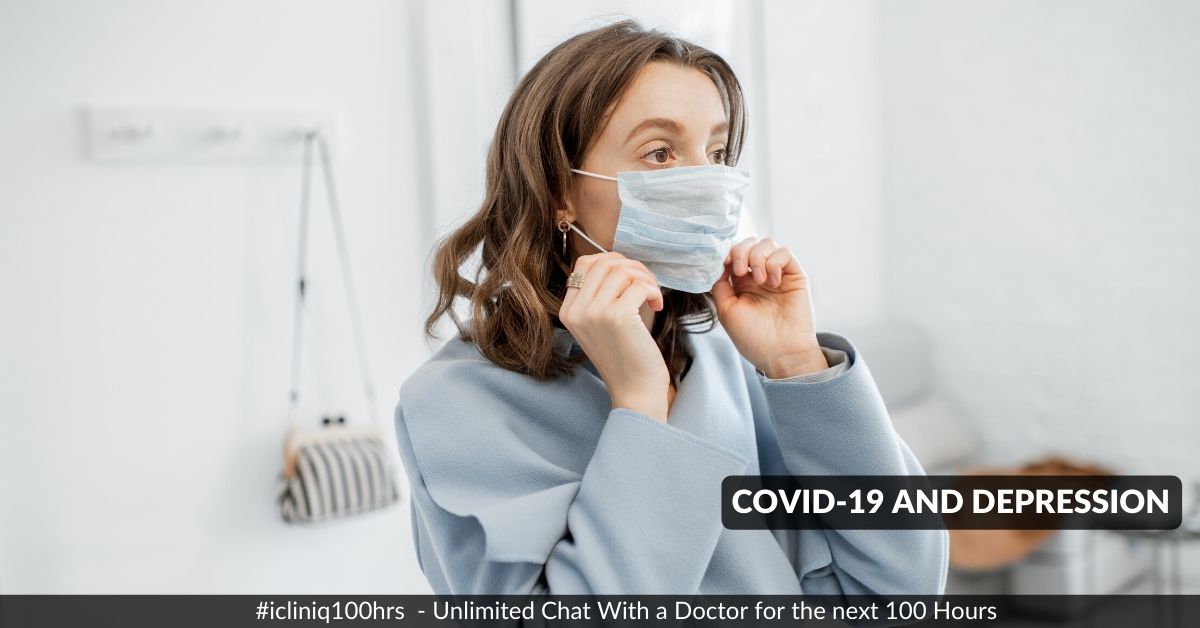 The new coronavirus (later named SARS-CoV-2) that was identified during late 2019 in Wuhan China, has been one of the deadliest killers worldwide for the past six months. It has been spreading limitlessly with no barriers to all ages and populations. It was not predicted to be a crisis initially when news came from the affected nations. It has been found to spread through nasopharyngeal secretions of the affected population. It is also known to severely affect the elderly and the immunocompromised population. It was initially considered as news of the foreign nations, but today it has developed to a disease next door. It has left the whole world scared and locked up continuously for months. After several episodes of lockdown, countries like China are now being affected by a second wave. The mutations in the virus are leaving the medical and pharmaceutical industry, clueless about developing a medicine or vaccine. When there are no medications identified, this scares the public more.

How Is Mental Health Affected by COVID-19?

Though COVID-19 is known to be a serious life-threatening disease, the mental health of the affected individuals, doctors, families, poor people, and students have been masked. To make it clear, we have to say that proper awareness has not yet been spread and received. This article would be explaining the impact of COVID-19 on different people in depression. Depression cannot be categorized as a minor issue. When it is starting to develop along with the global threat, then it is a fact that should be considered vitally. Only then the world population will move from the fear zone to the growth zone.

Depression is one of the complicated forms of our emotions, and it is very common and unnoticed. It is known as the common cold of emotional disorders, and it is defined as a feeling of severe despondency and dejection. Everyone at some part of our lives undergoes depression, some might go through severe forms of depression, and some might go through simple and easily recoverable depression. Depression can present in different forms, such as recurrent depressive disorder and bipolar disorder. The severity can be classified as mild, moderate, and severe. But, bipolar disorder patients express both manic and depressive episodes.

What Is the Relationship Between Physical and Mental Health?

If a person is affected by diabetes or any cardiovascular problems, then there are chances that the person might face more fear and depression. They are groups where more counseling is required.

How Is Depression in Affected Individuals?

According to a recent survey from the World Health Organization, nearly 264 million people are affected irrespective of age. Women are affected more than men. The utmost effect on mental health by COVID-19 is on the affected individuals. What can make any human depressed more than the fear of dying? Initially, there were no clinical clues of who will recover and who will die, even if it has been established today, the fear and depression of the isolated people have not yet come down.

Earlier the affected people who were claimed to be recovered, when they returned back to their living areas they were not accepted easily by the neighborhood. They were not only isolated physically due to the disease, but they also go through a series of loneliness both in hospitals and homes. Since their physical health was the utmost priority, importance to mental health and depression was neglected, even when there are few affected patients who had a supportive family and neighborhood, not all were blessed with the same. Those who are said to be completely recovered and safe, are in their homes still facing distress.

How Is Depression in Physicians and Doctors?

Doctors throughout the world, though they belong to different age groups, they have been our military and soldiers since day one of COVID. Being the topmost profession under risk, watching death after death on a daily basis, adjusting, and accepting to different environments could not be very easy. Considering the risk of becoming carriers of the disease, most doctors are not traveling to their homes. They are losing their bond of a supportive family. Because of this crisis, young doctors are not able to stay with their parents, kids, and friends. With no vaccine or treatment modalities being developed for the disease, and the disease curve peaking in many countries like Italy, USA, and India, doctors are losing hope day by day. Many doctors have lost their lives in the process of treatment. Thinking of the disease and treatment plans, they would have lost peace. They swear in to save lives and have lost theirs. Co-doctors who are watching their colleagues losing their lives could be one of the most depressive and hopeless situations doctors go through. This is how COVID drastically affects the mental health of doctors also.

What Is the Situation in Families of Affected Individuals?

It is definitely not easy for a family to have an affected family member. Waiting for the family member’s recovery and praying each and every moment is sure to be painful. The inability to not be there with them at the time of crisis and not helping them recover has been way more depressive. The family who lost their loved ones to COVID-19 and not even being able to see their dead faces have been the predominant reasons for a higher-level of depression. Performing the last rites and would help the relatives cope up with the loss of their loved ones. COVID-19 has not given the opportunity for that also. If a kid is affected, then the mother is definitely going to be affected.

How Is Depression Affecting the Poor Population?

The most suffering population, even without the disease, would be poor people. The reports from the World Health Organization says that about 76% to 85% of the people belonging to low or average economic status are declined from beneficial treatments for mental health. The individuals who were daily wagers now lost their jobs and are in a state of no income due to the lockdown. People are suffering in a way that they cannot afford their daily food, place, and even masks to protect themselves and their families. They are in a state where mental health is far apart from their sufferings. Everybody cannot afford to go to a psychologist. Thus, the poor are one of the most depressed due to COVID-19.

What Is the Relation Between COVID-19 and Acute Stress Disorder?

Acute stress is a condition in which there is a sudden episode of stress patterns. This sudden episode of acute stress disorder is initiated by experiences such as the COVID-19 crisis. Seeing a closed one suffer from a pandemic is definitely stress. It can be relieved only after the recovery from the disease because not everyone overcomes the virulence of the virus. It is necessary that the person experiencing stress should stay calm to overcome fear and stress. The patient has to overcome the dysfunctional and obnoxious episodes of stress. If the patient with acute stress disorder becomes hypervigilant and loses the ability to focus, they should get help from a psychiatrist immediately. The doctor should make sure that the patient gets sufficient sound sleep.

How Is Panic Attack Associated With COVID-19?

A panic attack is associated with disorders like anxiety. There will be a loss of control experienced by the person. A stressful event or death might cause anxiety. Panic attacks will be followed by certain physical changes. They are:

These symptoms usually subside after a short period of time. If it does not end, you should consult your doctor immediately.

What Are the Coping Strategies?

If it is a small distress situation, a simple coping up strategy can help. But in a depression, it will be difficult for the person to identify their own problems. In this situation, they will need support from family, friends, and everyone around them and ensure them by saying it is totally alright, how much ever bad the situation is. Being on positive notes are the most essential and important ways to cope up with depression. Giving importance to one’s own mental health and spreading awareness about the same is crucial to prevent depression. Practicing yoga, meditations, and healthy life practices like helping the needy, practicing good personal preventive measures are the united ways how this world can join hands and fight mental depression due to COVID-19. We can still be grateful for the positive things life has given us.

The rate of depression is seen higher in older-people. They fear that the virus would attack them easily. If they are people who are suffering from an illness, then their poor immune system would be an additional fear for them.

If your doctor prescribes, you can go for selective serotonin reuptake inhibitors. This might increase the level of serotonin hormone and can provide some relief. Tricyclic antidepressants are also helpful. If you are already taking medications for other illnesses, make sure you inform your doctor about this. Take help from our online consultation platform.

They are the most commonly used antidepressants. They are highly effective and have only a few side effects. It is considered as a safe group of drugs when compared to others. When the level of this medication is high, it results in serotonin syndrome. If you are suffering from heart problems or any other conditions, then you should inform your doctor. They will give alternative medication.

Taking these medications can increase the level of two hormones, epinephrine and serotonin. If other chemical messengers are affected, then numerous side effects can occur.

If your depression is very severe, then you must consult a psychiatrist immediately. They will recommend some useful counseling sessions. A therapeutic method of psychotherapy will be followed. Sometimes, you will be advised for group therapy. This will be highly useful.

For any doubts on depression related to COVID-19, call your doctor online.

Do you have a question on Depression or Psychotherapy?