Normotension Glaucoma - a Disease on the Rise

Glaucoma is a group of diseases causing long-standing progressive optic nerve damage. Glaucoma is thus a sort of generic name, referring to the plethora of diseases causing optic nerve damage with one common feature, a higher intraocular pressure (higher pressure inside the eye than the normal limits). A few patients belong to a lesser known, smaller subgroup among the broader classification of glaucoma called normotension glaucoma. This peculiar disease is one where, as the name suggests, the intraocular pressure is normal. But, is classified as a type of glaucoma as it produces eye changes that are characteristic of glaucomatous damage. This article describes the essential features of this disease with how the disease progresses and what measures need to be taken to detect and manage this problem. 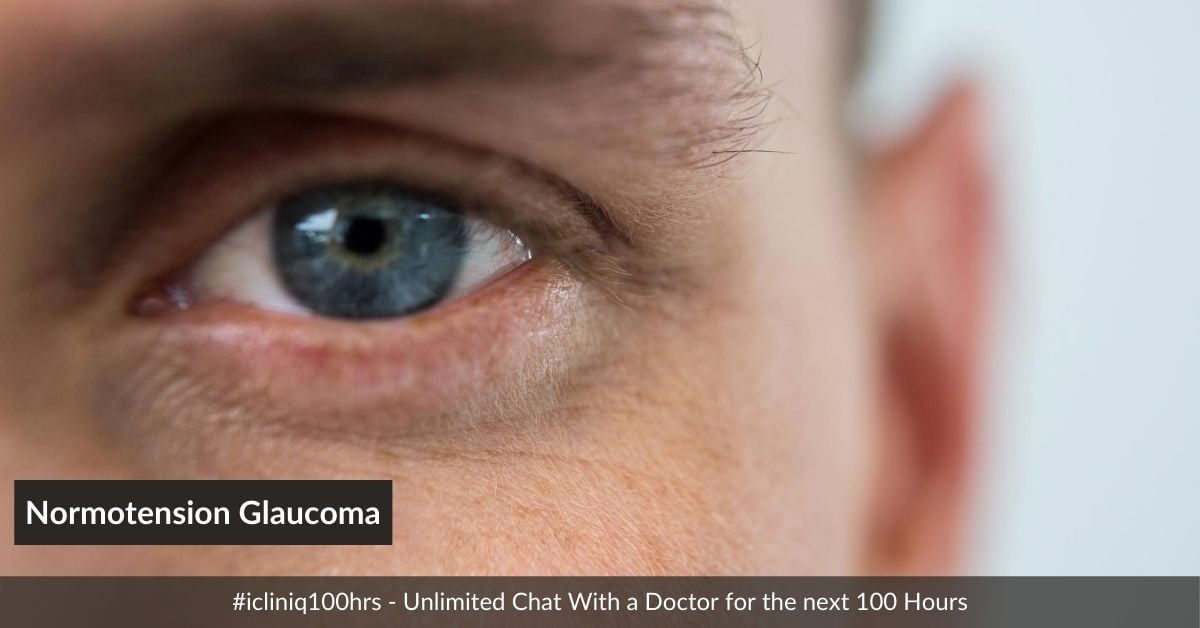 Glaucoma refers to diseases causing optic nerve damage with a common feature of high intraocular pressure. But, a smaller subgroup is called normotension glaucoma. This peculiar disease is one where, as the name suggests, the intraocular pressure is normal. But, is classified as a type of glaucoma as it produces eye changes that are characteristic of glaucomatous damage.

The cause of normotension glaucoma is proposed to be due to blood flow changes causing damage to the optic nerve (the nerve of sight), from blood vessels that are presumed to be more sensitive to blood flow changes than normal. This damage, just like in all glaucomas, affects the field of vision (refers to how much of the whole world around us we can see with our eyes regarding size). Thus, only the extent of vision and not the clarity of vision is affected, even in advanced cases.

To give the readers a sense of perspective, a patient with advanced optic nerve damage due to normotension glaucoma will be able to see as clearly as any normal person, but he will only be able to perceive the things around him as if he is looking through a tiny hole (also called in medical terms as tubular vision), because of massive constriction of his visual field.

Related Topics
Diagnosed with Glaucoma: What Next?
How does color blindness occur?
Is it necessary to use four eye drops to control eye pressure?

What Are the Symptoms in a Patient with Normotension Glaucoma?

A patient with normotension glaucoma is usually asymptomatic, and the condition will only be detected by screening.

There are groups of people who have a higher risk of developing glaucoma, the most common being genetic. A few races are known to have a higher incidence of normotension glaucoma than the global average. The number is steadily increasing with awareness about the disease and adequate screening modalities being made available. The second group being, relatives of known glaucoma patients and patients with hypertension and disease related to blood vessels (stroke, heart disease, diabetes). It is recommended to visit an ophthalmologist for getting screened for glaucoma.

What follows during screening is a firstly check of vision acuity (when the doctor or optometrist asks you to read a few letters which decrease in size as each line progresses and checks the patient for glasses. Then the examination continues with a check of your color vision using Ishihara's charts, an estimation of your intraocular pressure using applanation tonometry. The examination then includes a thorough examination of the eyes using a slit lamp with special emphasis on the angle of the anterior chamber and optic disc.

The next most important test being the visual field test. This test is the main “treatment deciding” factor in all glaucomatous diseases. This test, when performed correctly by patients, enables doctors to get an idea of the exact extent of optic nerve damage. Hence even if the pressure lowering drugs are working and reducing the intraocular pressure, the optic nerve damage does not go down. Then, the treatment must be considered as inadequate and must be reviewed.

Since the examination of the retina can be confounded as it is a subjective assessment, to maximize effectiveness, it is recommended to supplement the examination with objective investigations. A few of these tools being stereoscopic optic disc photographs, these are simply an objective supplement to the appearance of the disc and has a corroboratory value with the results of the other tests. Central corneal thickness measurement is also done because any variation in the thickness of the cornea can have a corresponding variation in intraocular pressure. Retinal nerve fiber layer analysis is also is an objective assessment of optic nerve fiber layer thickness in comparison to age and race-matched normative data. This imaging is done with a machine called the Optical Coherence Tomography (OCT). A similar imaging method used to estimate optic nerve fiber thickness is the GDX VCC, although it operates on a different mechanism.

In earlier days, doing a diurnal variation test was in vogue – in this test, a patient was to stay overnight at the hospital, and his eye pressure would be measured at regular intervals throughout the night. This is still considered as an inexpensive and excellent test to detect normotension glaucoma.

This battery of investigations and examinations may not all be necessary, and they may be tailored depending on various patient factors. This enormous emphasis coupled with such a high volume of tests is, as mentioned earlier, due to the symptom-free nature of the disease as well as the fact that the earlier a patient can be picked up, the earlier s/he can be started off on their treatment and optic nerve damage avoided.

Treatment modalities available mainly include eyedrops which reduce the pressure of the eyes (antiglaucoma drugs). Few cases may also be prescribed drugs which alter blood flow such as calcium channel blockers. It is quite rare for a patient to require surgery, but that may be necessary depending on the optic nerve damage progression.

Once a patient has been diagnosed to be glaucomatous, he has to be on follow up until there are no visual field changes for a prolonged period. So more often than not, the treatment is started and progression monitored by visual field test results, and this makes follow up essential as the disease is not one where the damage is caused and can be prevented in one go. The entire process of follow up and monitoring and tailoring treatment is one that goes on for years with follow-ups every six months to monitor progression.

Thus, the best way to deal with normotension glaucoma is screening and early diagnosis coupled with prompt and regular follow-ups.

Can glaucoma and cataract be operated at the same time?

Query: Hello doctor, My mother, who is aged 57, had eye pain recently. We consulted a doctor and got to know that my mom has glaucoma. Also, they mentioned that it is in the advanced stage and severe of around 90%. From another couple of tests, they found that my mother needs cataract surgery along with gl...  Read Full »

Query: Hi doctor, I am 65 years old. I developed partial retinal detachment in the right eye. An urgent surgery was done and a silicone oil has been filled. This happened around two months back. The vision field is restored and the retina is reported to be well attached. But, about two weeks back the pres...  Read Full »

Glaucoma - an Overview of Causes, Types and Treatment

Article Overview: Most people know glaucoma as a disease associated with diabetes and is caused by high intraocular pressure (pressure in the eye). I have explained its causes, types, symptoms, investigations, and treatment in detail in this article.  Read Article

Do you have a question on Glaucoma or Eye Pressure?