In this article, we will take you through Bacillus cereus infection in detail, which is an essential and most common cause of gastroenteritis. 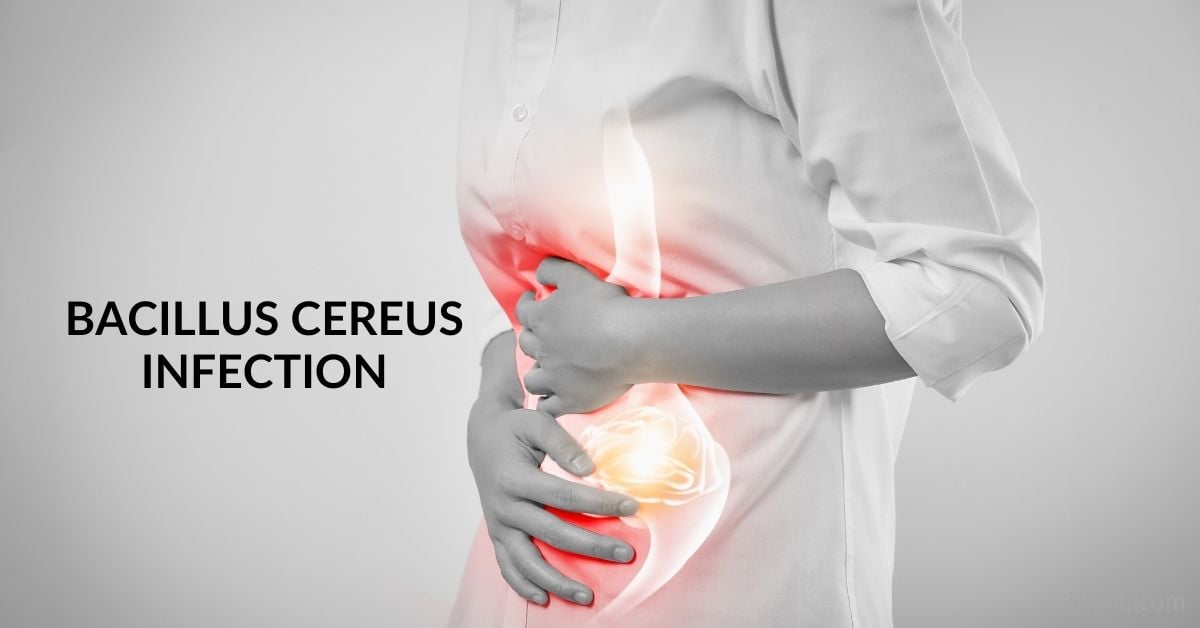 What Is Bacillus Cereus?

Bacillus cereus is an aerobic gram-positive and rod-shaped bacteria capable of forming spores. It can also at times grow in anaerobic conditions, i.e., in the absence of oxygen. This bacterium produces toxins that bring about diarrheal and emetic types of food poisoning.

What Toxins Are Produced by Bacillus Cereus?

The toxins produced are of two types:

The emetic toxin has a ring shape and has a chemical structure similar to that of potassium ionophore valinomycin. It causes emetic types of food poisoning.

The three enterotoxins include the following:

Bacillus cereus is widely prevalent in the soil. Bacillus Cereus is a soil saprophyte and hence is detected in plants. However, few species have been isolated dairy products, eggs, and meat products.

These bacteria grow on food when placed at room temperature or a favorable temperature, say between 8°C to 55°C for more than 2 hours and at a pH greater than 4.8. Once they grow on the food materials, even heat treatment cannot destroy them. This type of bacteria can even grow on foods that have undergone heat treatment. Spores are responsible for food poisoning, germination of which is enhanced by heat treatment.

For an infection to occur and exhibit symptoms, both diarrheal and emetic, the Bacillus cereus should be present in numbers greater than 10,000 for every gram of food. However, few studies suggest that even fewer numbers can cause infections associated with hospitalization.

What Is Bacillus Cereus Infection?

It is a food-borne bacterial infection characterized by gastrointestinal illnesses like emetic and diarrheal syndromes.

Once contaminated with the Bacillus cereus, symptoms of an emetic syndrome are seen when there is a production of an emetic toxin called cereulide, and diarrheal symptoms are produced with enterotoxin production. Bacteria enter the human body through contaminated food.

How Is Bacillus Cereus Infection Manifested?

The following are the symptoms associated with emetic-type:

The emetic toxin, cereulide, causes these manifestations, and it can occur within half an hour to six hours of taking foods that have been kept at room temperature, although these foods have been reheated.

Symptoms of diarrheal-type include the following:

The enterotoxins produced by Bacillus cereus bacteria are responsible for this type of diarrhea. Eating food that has been stored at room temperature for more than two hours is an important cause of Bacillus cereus infection. The onset of symptoms occurs anywhere between 6 and 15 hours after taking the food.

Both the types of toxins are heat-labile, i.e., they are not destroyed by heat. Also, the symptoms usually resolve within a day of onset.

When the bacillus cereus comes in direct contact with wounds and the bloodstream, there is a risk of a severe type of infection.

The extraintestinal manifestations of Bacillus cereus infection are:

The risk of developing extraintestinal complications is further increased in the following conditions:

How Can We Diagnose Bacillus Cereus Infection?

Vitreous fluid is assessed for the presence of Bacillus cereus bacteria to confirm the diagnosis of endophthalmitis, an extraintestinal infection. However, when this bacteria is present in the bloodstream, it is a more serious condition called bacteremia.

How Is Bacillus Cereus Infection Treated?

Bacillus cereus infection does not usually have a need for targeted therapy. Symptomatic treatment along with oral or intravenous rehydration is needed in most patients.

In case of extragastrointestinal infections like endophthalmitis, immediate medical intervention is necessary. Depending on the organism involved, the antibiotics are chosen. The Bacillus cereus is resistant to beta-lactam antibiotics, and hence these are not recommended in treating Bacillus cereus infections.

Since Bacillus cereus is resistant to antibiotics like Clindamycin and Erythromycin, they are not the recommended first-line drugs in most cases.

Administration of antibiotics is done through intravenous or intraocular routes when there is a severe risk of systemic infection.

The following antibiotics are recommended in Bacillus cereus infections:

What Are the Complications of Bacillus Cereus Infection?

Gastrointestinal symptoms usually do not cause severe symptoms. However, immunocompromised share a risk of developing fatal complications.

Following are the extraintestinal complications of Bacillus cereus infection:

What Is the Differential Diagnosis of Bacillus Cereus Infection?

How Can We Prevent Bacillus Cereus Infection?

With adequate preventive measures, preventing the contamination of food by Bacillus cereus is possible. Food products should be handled, processed, and stored effectively. When you have vomiting and diarrhea, it is essential to contact your healthcare provider to identify the cause.

Do you have a question on Bacillus Cereus Infection or ?