Bird flu or avian influenza is a viral infection that spreads among birds and can affect humans rarely. Read the article for causes, symptoms, mortality rate, and treatment. 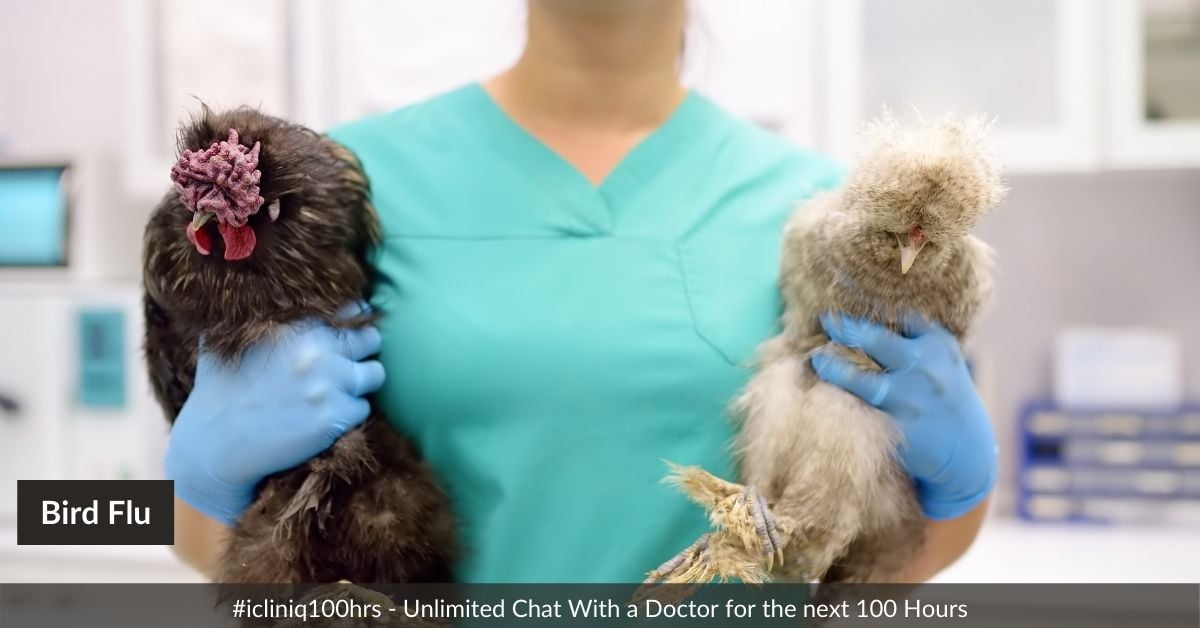 What Is Bird Flu?

Bird flu, otherwise called avian influenza, is a viral infection caused by a type of influenza virus that mainly affects birds but can also infect other animals and humans. When humans get infected, it can result in fatal complications. Almost 12 types of bird flu have been identified so far, including the H5N1 and H7N9, the strains that recently infected humans. H5N1 is the most common type and was discovered in humans in 1997. This type is deadly to the bird, and humans or other animals can get infected by close contact. In 1997, almost 60 % of the infected humans died. Bird flu outbreaks have been recorded in Africa, Asia, North America, and some parts of Europe.

H5N1 does not spread easily from one person to another, and very few human-to-human transmission cases have been reported so far. For example, the virus getting transmitted from an infected baby to the mother. Migratory aquatic birds like wild ducks are the carriers of these viruses, which spread this infection to domestic fowls, such as turkeys, chickens, etc. Bird flu has been recorded in pigs, donkeys, and other animals, making it challenging to eradicate. Doctors are concerned about a possible global outbreak if this virus mutates and gets easily transmissible from one person to another, which is why scientists are working on finding vaccines to protect humans against the bird flu.

How Does the Bird Flu Virus Spread?

Avian influenza is transmitted by close contact with a dead or alive infected bird. You can get infected by:

You will not get infected by eating thoroughly and adequately cooked eggs and poultry, even if there is an outbreak of the bird flu. The more virulent strains of this virus can spread rapidly among flocks and destroy the entire herd in less than 28 hours. Some strains are less pathogenic and just affect egg production. Indoor poultry, range-raised poultry, live poultry markets, bird farms and trading, etc., have contributed to the recent bird flu outbreaks. Human to human contact is not possible unless there is prolonged contact. But, mutations can make some strains of avian flu to become easily transmissible between humans.

The H5N1 strain was the first avian influenza virus to infect humans, which occurred in Hong Kong in 1997. This outbreak was thought to stem from handling infected poultry. This strain occurs naturally in wild waterfowl, from where it spreads to domestic poultry.

Who Is at Risk of Getting Infected With the Bird Flu?

H5N1 can survive for long periods, and infected birds continue to release the virus in feces and saliva for almost ten days. People who are at risk of getting infected are:

What Are the Signs and Symptoms of Avian Influenza in Humans?

The signs and symptoms of bird flu are similar to the flu, such as:

The symptoms usually take 3 to 5 days to appear after getting infected. The condition can worsen within days, and patients can develop pneumonia and acute respiratory distress syndrome (ARDS).

What Are the Possible Complications of Bird Flu?

Life-threatening complications of bird flu include:

Bird flu kills more than 50 % of the infected people, and less than 500 bird flu deaths have been reported since 1997.

How Do Doctors Diagnose Bird Flu?

The CDC (Centers for Disease Control and Prevention) has approved a test called influenza A/H5 (Asian lineage) virus real-time RT-PCR primer and probe set to diagnose the bird flu virus. This test can provide preliminary results in about four hours, but it is not widely available. If the doctor suspects bird flu, the following tests might also be performed:

Other tests might be needed to determine how the heart, liver, and kidneys are functioning.

What Are the Treatment Options for Bird Flu?

The antiviral drugs Oseltamivir, Zanamivir, or Peramivir are used to reduce the severity of the disease. But, antiviral therapy should be started within 48 hours of the onset of symptoms. Infection with H5N1 in humans can result in severe illness and requires isolation, hospitalization, and treatment in intensive care, and the treatment is determined based on the different symptoms. In severe cases, oxygen support is needed.

Family or household members and other close contacts are also started on antiviral drugs as a preventive measure and are isolated.

Can Bird Flu Be Prevented?

The FDA (Food and Drug Administration) has already approved a vaccine to prevent the H5N1 bird flu virus, which is not available to the public yet. The vaccine is being stockpiled to be used in case of a future outbreak. Scientists are also working on developing other types of bird flu vaccines.

The following tips can keep you safe from the bird flu virus:

If you are traveling to a country or any region with bird flu outbreaks, avoid going to live markets and stay away from birds and animals. Please keep your hands clean by washing them with soap and water or an alcohol-based hand sanitizer containing at least 60 % alcohol.

For more information on the bird or avian flu, consult an infectious specialist online now.

Article Overview: This article discusses the causes, symptoms, risk factors, diagnosis, and treatment of pneumonia, which is a lung infection caused by bacteria. It also includes ways to prevent pneumonia.  Read Article

What Is Pneumonia? An infection that causes inflammation of air sacs in the lungs is called pneumonia. These air sacs may get filled with pus or fluid, which results in coughing up phlegm. The other common symptoms include fever, chills, and breathing difficulties. Pneumonia can be caused by variou...  Read Article

Do you have a question on Viral Infection or Difficulty In Breathing?