Monkeypox is a zoonotic viral disease. This virus got its name as it was first noticed in laboratory monkeys in the late 1950s. Learn more about the monkeypox virus, its transmission, symptoms, treatment, and prevention. 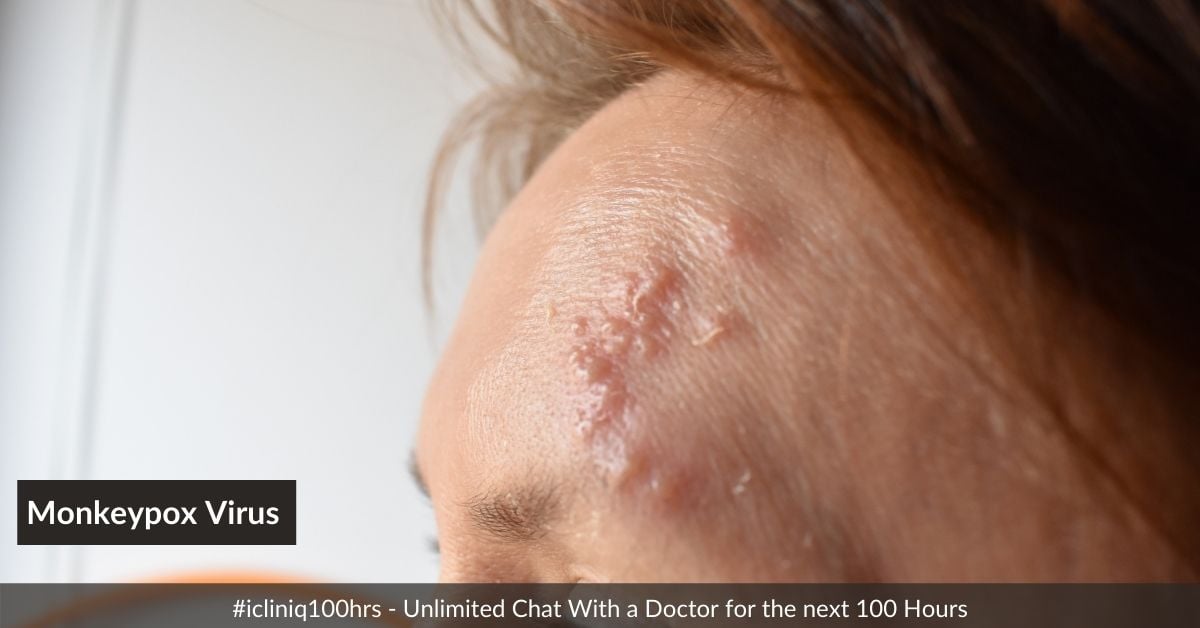 Monkeypox is caused by a virus called the monkeypox virus. It is a disease that is transmitted from wild animals to humans. It can spread from person to person. The first human case of monkeypox was noted in 1970 in the Democratic Republic of Congo during a period when efforts were being taken to eradicate smallpox. Since then, human cases of the monkeypox virus have started to be reported. To know more about the monkeypox virus, its symptoms, treatment, and prevention, read the article.

Monkeypox is a zoonotic viral disease, which means it is transmitted from wild animals such as rodents and primates to humans. It is caused by the monkeypox virus, which belongs to the Orthopoxvirus genus in the Poxviridae family. It is primarily seen in the tropical rainforest areas of Central and West Africa, and it occasionally can be exported to other regions of the world. It has the potential to spread from one person to another through contact with the lesions, respiratory droplets, body fluids, or contaminated materials such as bedding. Its symptoms were similar to those symptoms of smallpox, but it was clinically less severe.

How Is Monkeypox Virus Transmitted?

Monkeypox virus is transmitted from wild animals like rodents, rope squirrels, tree squirrels, Gambian pouched rats, dormice, and different species of monkeys and others. Even though the main carrier of the monkeypox virus is not known, rodents are considered to be more likely a causative factor of this monkeypox virus. The infection spreads through the direct contact of the cutaneous or mucosal lesions of the infected animals or through contact with the blood or bodily fluids of the infected animals.

What Are the Signs and Symptoms of Monkeypox?

The symptoms of monkeypox are similar to that of the symptoms of smallpox. But it is known to be clinically less severe. The incubation period is the time period between the infection to the onset of the symptoms, which is generally around 6 to 13 days. Still, it can also range between 5 to 21 days.

In the initial days of the infection, around 0 to 5 days, monkeypox is characterized by the following symptoms:

Swelling of the lymph nodes is one important symptom that is used to differentiate monkeypox from smallpox or any other infectious disease with similar conditions.

Later along with fever, skin eruptions start to appear. It is most commonly seen in the regions of the face and the extremities. It can also be seen on the oral mucous membranes, genitalia, conjunctiva, and cornea. The number of skin eruptions can be from a few to some thousands. Usually, these skin eruptions progress through the following way before sloughing off. 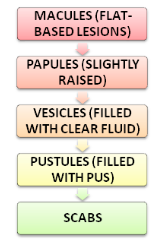 These symptoms typically last for about 2 to 4 weeks. In Africa, around 1 in 10 people who contracted the disease die from monkeypox.

How Is Monkeypox Diagnosed?

Typically monkeypox is diagnosed by the symptoms. Lymphadenopathy is one of the most distinctive features to differentiate monkeypox from other illnesses. To confirm the diagnosis, the specimen samples are collected and shipped to the laboratory according to the WHO guidelines. Polymerase chain reaction (PCR) is the most preferred laboratory diagnostic test done to diagnose monkeypox because of its accuracy and sensitivity.

A biopsy is also another method to diagnose monkeypox.

If the patient is in the late phase of having rash or fluid filled skin eruptions the fluid is collected in the intradermal syringe and is sent to the laboratory for investigation.

Swab Test: Throat swab or nasopharyngeal swabs test are done by running the sterile cotton tipped swab in the throat and near both the tonsils without touching the sides of the mouth,tongue,gums or teeth and sending it in for microscopic examination.

How Is Monkeypox Treated?

As of now, there is no treatment available specifically for monkeypox. However, during the monkeypox outbreak, the affected individuals were treated with smallpox vaccines (since it is closely related to the monkeypox virus), Cidofovir, Vaccinia immune globulin, and ST-246 - Tecovirimat (used to treat individuals affected by orthopoxvirus).

Imvanex, a smallpox vaccine, is found to be 85 % effective against the monkeypox virus. ACAM200, another smallpox vaccine containing a live vaccinia virus, is suggested to be used in people affected by monkeypox. But the smallpox virus is not currently available to the public, but the Imvanex vaccine has been made available for monkeypox-affected individuals in the United States since 2019.

Cidofovir is recommended for use in life-threatening monkeypox cases.

Few studies have concluded that tecovirimat (ST-246), when administered for 14 days in individuals affected by monkeypox, can increase the survival rates. But this drug is reserved for emergency use. It can be made available under an IND (investigational drugs are available to patients affected by a severe and life-threatening disease when no other treatments are effective). Survival rates are higher when treatment is started at the earliest stage of infection.

Brincidofovir is an antiviral drug approved by food and drug administration (FDA) has been proven to be effective against orthopoxvirus in animal studies. Trials are going on to see the efficacy of Brincidofovir in the treatment of monkeypox.

What Are The Guidelines For The Management Of Monkeypox Virus?

The principles of management include:

1) Isolation of the Infected Individual:

2) Protection of the Affected Skin and Mucous Membranes:

3) Rehydration or Fluid Administration to the Patient:

What Are the Complications of Monkeypox Virus?

Some of the complications of monkeypox include:

How To Prevent Monkeypox?

1) Creating awareness about the risk factors and educating the people about the measures to reduce exposure to the monkeypox virus is the most important strategy that has to be followed in preventing monkeypox.

2) In the case of animal-to-human transmission, close contact with the infected animals is the main causative factor for the spread of the monkeypox virus. So unprotected contact with animals that are ill or dead should be avoided.

3) Foods containing meat or any other animal parts should be adequately cooked before consumption.

What Is The Current Research Ongoing For Monkeypox Virus Eradication?

Researchers have started with the sequencing of the virus sample to rule out the mechanism of spread and to understand the mutational changes in the virus making it transmissible.

Monkeypox is typically a self-limited disease. The symptoms usually last for about 2 to 4 weeks. Surveillance and rapid diagnosis of the cases infected with the monkeypox virus can be easy to contain the transmission. Raising awareness about the risk factors and educating the public about the measures to prevent and control the monkeypox virus is an essential strategy to deal with this virus.

Monkeypox is not extinct, and occasional outbreaks still continue to occur in Central and West Africa and parts of America, the United Kingdom, and Singapore.

When Did the Recent Outbreak of Monkeypox Occur?

The recent monkeypox infection was reported in the United States on May 18. Following this, there have been numerous outbreaks in 12 other non-endemic nations.

How Was the First Monkeypox Virus Transmitted?

The Democratic Republic of Congo reported the first case of monkeypox way back in 1970 on a nine-year-old boy. Consuming uncooked or inappropriately cooked meat or other products of infected animals is determined to cause the animal-to-human spread of this virus.

How Many Strains of Monkeypox Exist?

Two strains of the monkeypox virus exist, Central African and West African strains. Of the two strains, the former is more severe and associated with higher mortality rates.

How Is Monkeypox Transmitted to Humans?

Monkeypox infected animals transmit the infection to humans. Transmission is through direct contact with an infected animal’s body fluids, lesions, or animal bite.

Is Monkeypox Transmissible From One Person to Another?

How Rapidly Does Monkeypox Spread?

Monkeypox infection spreads quickly, but it is not as contagious as smallpox or chickenpox.

What Is the Incubation Period of Monkeypox Virus?

According to the Center for Disease Control and Prevention (CDC), the incubation period of monkeypox infection ranges from 5 to 21 days. In specific, it is usually 7 to 14 days.

What Symptoms Do Monkeypox Present?

Papular rash develops on the face first and spreads to the remaining parts of the body.

Does Monkeypox Cause Pain?

The monkeypox skin lesions are painful and itchy. In addition, it also causes muscle pain, back pain, headache, exhaustion, and a general sick feeling.

Are Monkeypox and Chickenpox Similar?

Although the blistering skin lesions appear similar in monkeypox and chickenpox, both are different. Monkeypox is caused by the monkeypox virus, and the varicella-zoster virus causes chickenpox. Chickenpox is highly contagious as compared to monkeypox.

Is Monkeypox a Severe Infection?

Though the symptoms caused by the monkeypox virus are milder than that of smallpox and last for two to four weeks, one in every ten people who have contracted the disease is known to die of this disease.

Are Monkeypox and Smallpox Similar?

The viruses that cause monkeypox and smallpox infection belong to the same Orthopoxvirus genus. Though both are different infections, they have similar symptoms, except that monkeypox infection causes enlarged lymph nodes, which is absent in smallpox. Also, monkeypox is milder than smallpox.

At present, there is no treatment available to cure monkeypox infection. Supportive treatments to relieve the symptoms are done to minimize the complications. At times, approved antiviral therapy for smallpox is also used to manage monkeypox in emergency conditions.

Is There a Vaccine for Monkeypox?

There is no vaccine for monkeypox, but smallpox vaccines are being used to minimize monkeypox risk. In times of sporadic outbreaks of the virus, the smallpox vaccine is administered prophylactically to reduce the risk and severity of monkeypox.

Do you have a question on Monkeypox Virus or ?