Vomiting and diarrhea are the most common symptoms of stomach flu (viral gastroenteritis), but there are many other causes. It is not always serious and gets better in a couple of days. 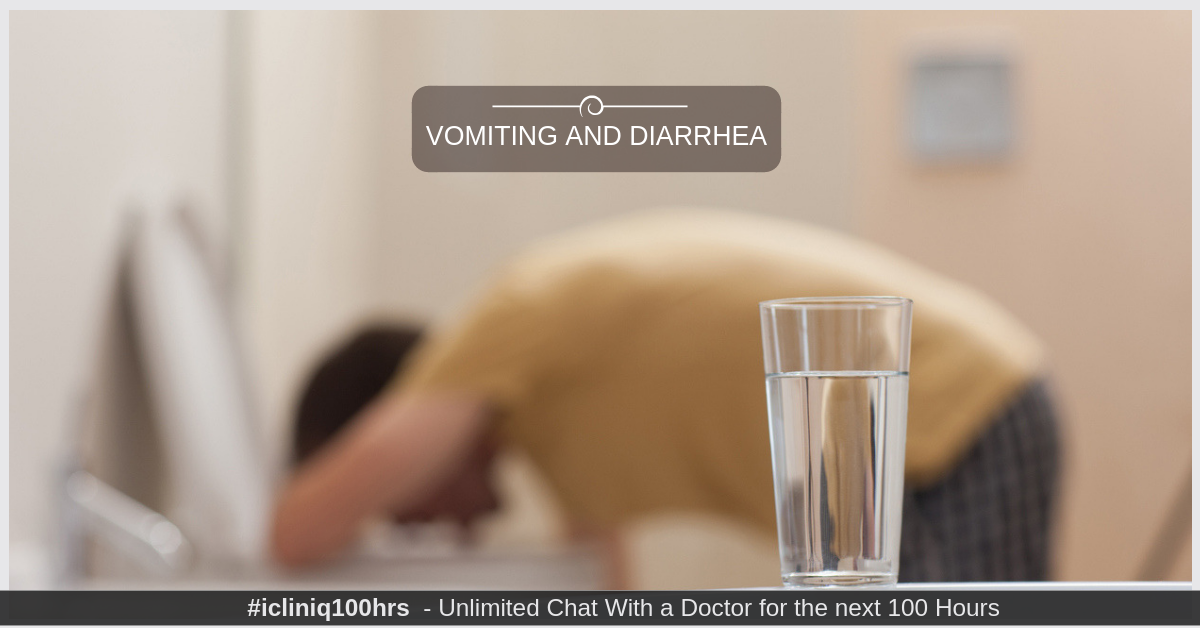 Vomiting and diarrhea are the most common symptoms of stomach flu (viral gastroenteritis), but there are many other causes. It is not always serious and gets better in a couple of days. Rest and drinking fluids to prevent dehydration are the only treatment that is needed, but it is not always true.

When Do Diarrhea and Vomiting Occur Together?

Some of the common causes are:

Are Vomiting and Diarrhea Dangerous?

They can be dangerous if you lose a lot of fluids, which can result in dehydration. Children and older people are more susceptible to dehydration. Mild dehydration can be treated with home remedies, but severe dehydration might require hospitalization.

What Are the Signs of Dehydration?

The signs of dehydration are:

In addition to these symptoms, the signs of dehydration in infants and toddlers are:

How to Prevent Dehydration?

• Continue breastfeeding the baby, as breast milk has fluids and electrolytes to prevent dehydration. Nurse for 5 minutes every 30 to 60 minutes, and return to normal nursing if the baby does not throw up for 4 hours.

• If you feed your baby formula milk, then switch to formula milk that is lactose-free, as lactose can worsen diarrhea.

• Your doctor might suggest you switch to ORS (oral rehydration solution) for 12 to 24 hours.

• ORS is given as it contains the right amount of salt, sugar, potassium, and other nutrients.

• You can give clear soups and fruit juice.

• Avoid giving plain water and soft drinks, as plain water does not contain all the nutrients lost from the body and the sugar content in soft drinks can irritate the stomach.

• The lost fluids can be replaced by drinking ORS or liquid meal replacements. Sports drinks like Gatorade are a good and palatable alternative in adults as it contains electrolytes in ideal concentration for faster absorption.

When to See a Doctor for Vomiting and Diarrhea?

Get immediate medical attention, if the child -

• Is younger than 6 months.

• Has been vomiting for more than 8 hours.

• Has blood in the vomit or stool.

• Has a severe headache or stiff neck.

• Is sleeping more than usual.

• Has abdominal pain for more than 2 hours.

• Shows signs of dehydration even after taking ORS.

And for adults, consult your doctor if-

• You are vomiting for more than a couple of days. Elderly patients should be taken to the hospital even with minimal symptoms.

• You have diarrhea even after 7 days with significant pain in the abdomen or abdominal distension.

• You show signs of dehydration even after taking ORS.

• Your vomit is green, yellow, coffee-colored or blood tinged.

• You see blood in stools.

How Are Vomiting and Diarrhea Treated?

Usually, vomiting and diarrhea resolve within a couple of days with the help of home remedies to prevent dehydration:

• Keep giving smaller feeds for 5 minutes every 30 to 60 minutes.

• Give ORS after consulting your doctor.

• Do not take dairy and caffeinated drinks.

Medicines should not be taken for vomiting and diarrhea without consulting your doctor. Some of the drugs used are:

Diarrhea and vomiting can cause severe dehydration in infants, so keep an eye for the signs of dehydration. Rest and drink plenty of fluids, as these symptoms are usually caused by stomach flu, which gets better on their own after a few days. If your symptoms worsen or you are dehydrated, get immediate medical attention.

Is vomiting a cause of prominence of the vessels of sclera?

Query: Hi doctor, I am a 21 year old female. I was bulimic for about a year. It happens once or twice a week. I never noticed any permanent changes in my eyes throughout my episodes. However, the last time I ever binged and purged three months ago, I vomited violently. A few weeks after this, I noticed tha...  Read Full »

Had spicy food and suffering from diarrhea. How to treat it?

Query: Hi doctor, Three days back, I had food for dinner. The food was spicy. Next day, in the morning, I vomited it completely. I suffer from diarrhea for the past two days, and I feel tired. Please suggest me.  Read Full »

Do you have a question on Diarrhea or Food Poisoning?