Pseudotuberculosis is a bacterial infection that is caused by Y. pseudotuberculosis, a gram-negative bacteria. Read about the causes, symptoms, risk factors, and treatment now. 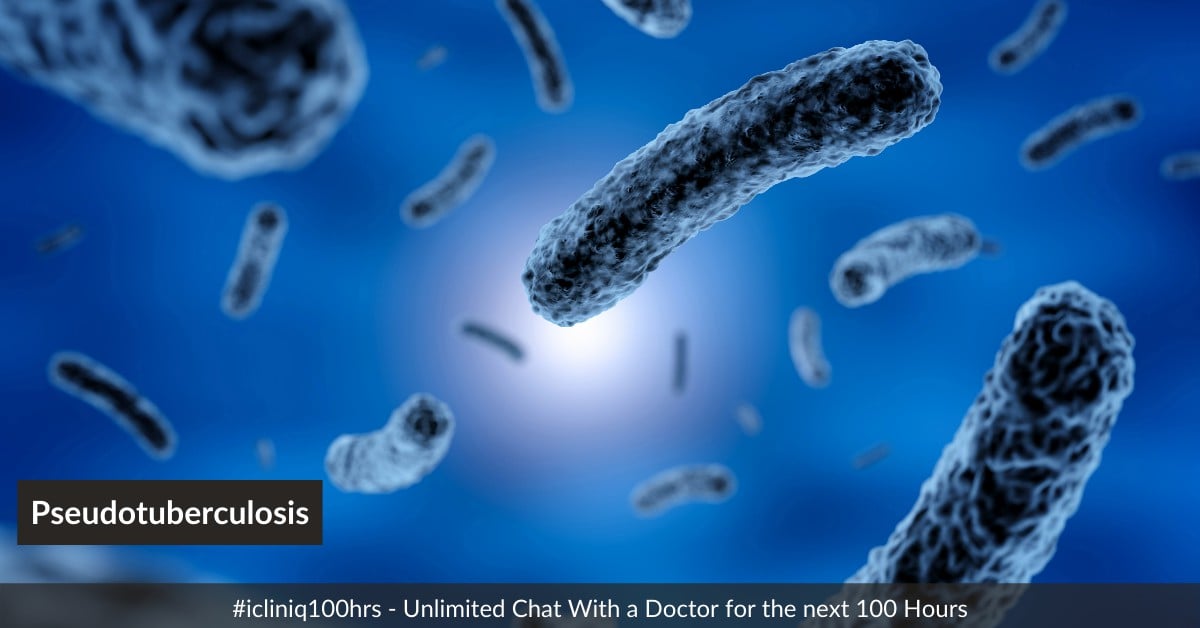 It is a bacterial infection that is caused by Y. pseudotuberculosis. It is also called Yersinia. This infection can be seen to occur worldwide, but it is more common as a sporadic disease, especially in northern Europe and Asia. It is primarily seen to affect rabbits and other mammals and birds. This infection can be transmitted from asymptomatically infected domestic pork, cattle, sheep, deer, and rabbits, dogs, birds, and reptiles and can be transmitted by cross-contamination happening during the preparation of food.

Reports show that many outbreaks of this type of infection have occurred in zoos, laboratory facilities, and animal-holding areas. Y. pseudotuberculosis is a relatively rare pathogen in humans. The Public health data provided by Russia reports this infection since 1988, and children are twelve times more likely to get infected than adults.

The most commonly occurring syndromes related to this bacteria are self-limited enterocolitis and mesenteric lymphadenitis (pseudoappendicitis), but immunocompromised hosts may have septicemia, which may lead to metastatic infection. Commonly seen metastatic sites are liver, spleen, lungs, and joints or bone, especially in individuals who have cirrhosis, diabetes, and hemochromatosis. There is a special form of Y. pseudotuberculosis infection known as Far East scarlet-like fever (FESLF), which has been reported in association with specific strains of Y. pseudotuberculosis, and it is seen in Russia and Japan. It demonstrates mitogen A, which plays the role of a superantigen. In Japan, FESLF is called Izumi fever.

It is caused due to the pathogen Yersinia pseudotuberculosis is a bacteria belonging to the family Enterobacteriaceae, which is most commonly known to cause foodborne illnesses like enterocolitis or mesenteric lymphadenitis (pseudoappendicitis) in children. It can also be associated with complications after the infection like erythema nodosum and reactive arthritis. Reports show that strains of Y. pseudotuberculosis which is found in Asia, can produce a superantigen-associated toxic erythema illness which is suggestive of scarlet fever.

It was first isolated in 1883 and is a gram-negative bacteria belonging to the genus Yersinia in the Enterobacteriaceae family. It can cause gastrointestinal infection in many wild and domestic animals when combined with Yersinia enterocolitica. Y. pseudotuberculosis is cold-tolerant, which leads to the transmission through contaminated cold-stored foods, handling infected animal tissues, and cross-contamination during the preparation of food.

What Are The Symptoms?

Symptoms of Yersinia pseudotuberculosis are as follows:

Related Topics
How do I confirm that I have got a viral or bacterial infection?
What can be done to get rid of swimmer's ear?
How effective are cloth masks in preventing COVID-19?

Abdominal pain is a prominent symptom in older children and adults. Bacteremia and sepsis are known to occur in patients with a weak immune system.

When To Consult A Doctor?

Pseudotuberculosis is not usually serious, and the recovery is very quick in most people. Anyone who is having prolonged or severe diarrhea or with any of the symptoms mentioned above should visit a doctor. Also, children having diarrhea, vomiting, or refusing to consume fluids should consult a physician.

Are There Any Complications?

This infection can lead to a certain complication, especially in immunocompromised individuals, which are as follows:

When you visit your doctor, you will be first asked about various symptoms that you are facing and your diet history. After that, a physical examination will be done, and various lab tests will be conducted. Blood culture and stool culture can be done. Even serological studies can be done to identify the organism.

This infection can be treated using various antibiotics, which are as follows:

1. Fluoroquinolones: These are the drugs of choice for this infection. Studies show that they are very effective in treating pseudotuberculosis. Trimethoprim-sulfamethoxazole and aminoglycosides can also be preferred in treating it.

2. B-lactams can be used, but they are questionable. Hence, your physician will decide the treatment regimen depending on the patient and the bacterial strain isolated using various tests.

3. Consumption of more fluids in case of loose motions or diarrhea, or vomiting.

How Can It Be Prevented?

Certain precautions and measures can be taken to prevent this infection which has been mentioned below:

1. Washing fresh fruits and vegetables before consuming them.

2. Avoiding the consumption of raw or undercooked meat.

3. It is advisable to consume only pasteurized milk or milk products.

4. You should wash hands with soap and water:

· Before preparing the food

· After using the toilet

· After nappies have been changed

· After you have handled raw meat.

5. You can prevent cross-contamination from occurring in the kitchen by:

· Usage of separate cutting boards for meat and other foods

· Cleaning the kitchen and all the utensils after handling and preparing the meat.

6. The animal feces should be disposed of in a sanitary manner.

Yersinia or pseudotuberculosis is a bacterial infection that can be managed easily, but if it is not treated on time, it can cause certain complications in the patients, especially in immunocompromised patients. Hence, it is advisable to contact your physician as soon as you suspect or develop any symptoms. Online medical platforms are playing a vital role in decreasing the gap between patients and doctors. Therefore, you can consult a physician or specialist using these platforms to get more details on these infections at the ease of your home.

Query: Hello doctor, I am a 26 year old male. I was addicted to cold drinks which had been getting me sick (catching a cold) over the past nine years. Doctors treated me with antibiotics such as Amoxicillin, Cloxacillin, Moxifloxacin, Cefpodoxime, Azithromycin, andSporidex which worked very well many ti...  Read Full »

Can viral infection during early pregnancy cause autism?

Query: Hi doctor, My wife is seven weeks pregnant (about three weeks from fertilization, we think, because she has long cycles) and came down with shingles almost 2 weeks ago (and a cold about a week ago). She has been taking Acyclovir and the pain has reduced but is still present. We are worried about th...  Read Full »

Article Overview: Strep throat is a bacterial infection affecting the throat. Read this article to know about the causes, symptoms, diagnosis, and treatment. Read Article

What Is Strep Throat? Strep throat is an infection caused by group A Streptococcus bacteria. It can affect children and people of all age groups. It is an air-borne infection. It spreads from one person to another person. It is a contagious disease and spreads through the respiratory droplets and s...  Read Article

Do you have a question on Bacterial Infection or Immunocompromised?