iCliniq / Answers / Internal Medicine / Hypoechoic Nodule / What does a lump under collar bone on right side mean?
ADVERTISEMENT
ADVERTISEMENT

Q. There is a lump above my left collarbone. Is it cancerous?

Answered by
Dr. Uphar Gupta
and medically reviewed by iCliniq medical review team.
This is a premium question & answer published on Aug 29, 2018 and last reviewed on: Dec 02, 2020 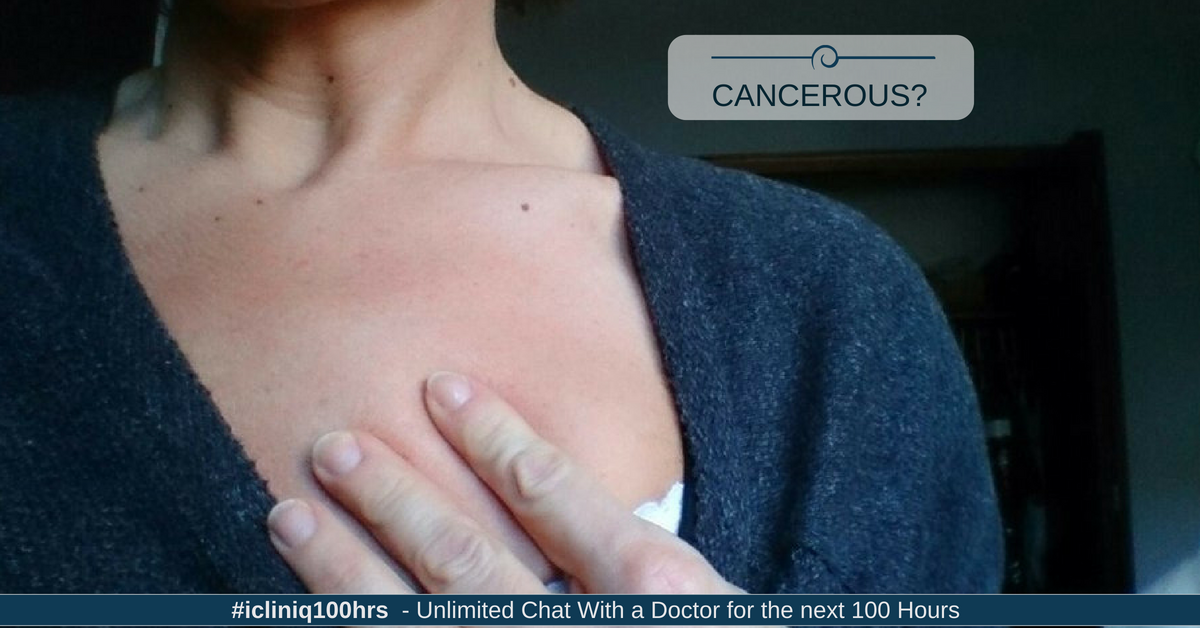 I consulted two doctors regarding a lump that I could feel above my left collarbone, whenever I strain or turn my neck. Both the doctors said that it was just a prominent tendon, but gave me an ultrasound to ease my mind. The ultrasound said 'there is a 6 by 4 mm hypoechoic nodule in my left supra clavicular area, presumably representing a small lymph node. If clinically indicated, an MRI or a CT can be done for further evaluation.

If it did not detect this small nodule six months back, can it have grown in just six months? Is hypoechoic bad? Why did the ultrasound say presumably a lymph node? I am so worried now. Do I need a biopsy or is there nothing to worry about?

There is a lymph node in the left supraclavicular region called as Virchow's node. If enlarged, it may indicate a malignancy of the abdominal region as that is the draining pathway of the lymph from that area.

A lymph node from cancer is generally very hard to palpate. A soft node is generally secondary to some inflammatory response, generally an infection.

Please ask your doctor to have a look at your abdomen and re-evaluate the node, although I am almost certain, it is nothing but an inflamed node. As it is of a short duration, it is highly unlikely to be anything dangerous.

I suggest you get the following tests:

Are you scared that the lump in your collarbone is cancer? Get a medical second opinion online now.

Thanks for replying. I already know that gastric cancer can metastasize to the Virchow's node. I have had a CT scan of the abdomen and pelvis three months ago as well as a transnasal esophagoscopy 10 months ago. An upper GI a month ago and a neck CT scan eight months ago.

These scans were done due to a hiatal hernia and acid reflux. All the scans were normal. So, gastric cancer would be highly unlikely. However, upon three doctor's examinations, no nodes were palpable and if this was the Virchow's node, it would have stated so on the ultrasound.

Normal, reactive, lymphomatous and tuberculous lymph nodes are predominantly hypoechoic when compared to the adjacent muscles. So, echogenicity is only a hint that this is a lymph node and this is not a metastasis from papillary thyroid carcinoma.

Hypoechoic does not mean abnormal. Hope that answers your question.

Basically, this is a lymph node of a size too small to be a malignancy or a metastasis. My frank opinion is that this is neither cancerous nor a metastasis from another cancer.

Related Questions:
My brain CT shows hypodensities under the putamen. Does this warrant a brain MRI?


.. like to know some details about your symptoms: What exactly happened during the dizzy spell? Do you feel your surrounding rotating around you? Or feel your head spinning? Do you feel blackening in front of your eyes, heart rate getting faster, swe...   Read full

How long should I take treatment to dissolve a tuberculosis lump?


Hi doctor, How long should I take treatment to dissolve a tuberculosis lump ... I have been detected this lump two years back ... Then again I got another lump near...   Read full