Multiple myeloma is a plasma cell cancer. Here, we presented an article which includes its types, signs, and symptoms, risk factor, treatment, and complication. 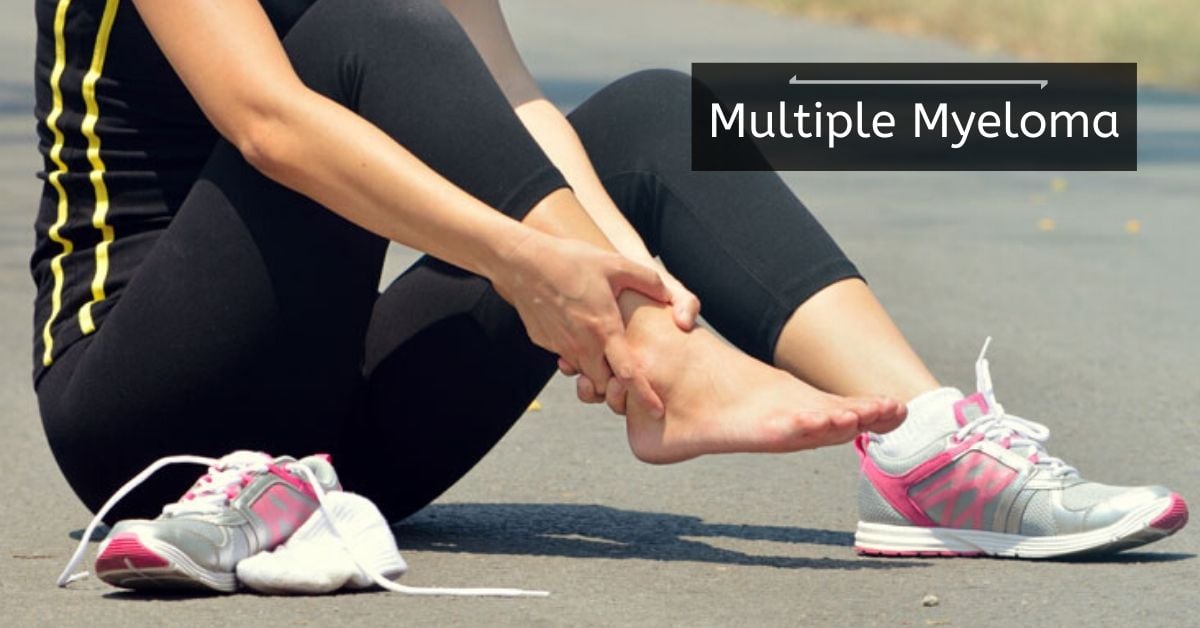 What Is Multiple Myeloma?

A type of cancer that affects the plasma cell, which are a type of white blood cell, is called multiple myeloma. Plasma cells originate in the bone marrow, which is the soft tissue that forms the center of hollow bones. Apart from plasma cells, the bone marrow also produces other healthy blood cells.

If the patient has no signs or symptoms, then treatment is not usually necessary. And for symptomatic patients, various treatment options are available to control the disease.

What Are the Common Types of Multiple Myeloma?

There are two main subtypes of multiple myeloma:

What Are the Common Signs and Symptoms of Multiple Myeloma?

Most patients do not have any signs or symptoms during the early stages of this condition. As cancer progresses, symptoms appear, which vary from person to another. The common symptoms include:

How Does Multiple Myeloma Affect the Body?

And instead of producing antibodies that fight off infection, cancer cells produce abnormal antibodies monoclonal proteins or M proteins. These proteins build up in the patient’s body, which damages the kidneys.

What Are the Risk Factors of Multiple Myeloma?

Some of the common factors that can increase the risk of a person developing multiple myeloma are:

How Is Multiple Myeloma Diagnosed?

How Is Multiple Myeloma Treated?

Treatment helps relieve pain, prevent complications, and slows the progression of the disease in patients with symptoms. If you do not have any symptoms, then treatment is usually not needed, and the doctor just monitors your condition regularly.

The treatment options for multiple myeloma include:

1) Targeted drug treatment - (Bortezomib, Carfilzomib, Ixazomib) - These drugs attack and block the action of a specific substance in the cancer cells and break down the protein.

What Are the Possible Complications of Multiple Myeloma?

Some patients have to alter their lifestyles to cope with pain and other symptoms of multiple myeloma. If you feel that your symptoms are getting worse, then it is best to consult a doctor. You can consult experienced and professionally trained doctors easily and comfortably from your home by posting a query now!

How Does Multiple Myeloma Occur?

Multiple myeloma is a cancer of the plasma cells (type of white blood cell) of the bone marrow. Like every other cancer, these cells become abnormal and cancerous on their own due to genetic mutations and begin to multiply at a faster rate than the healthy plasma cells. They accumulate within the bone marrow outnumbering healthy cells.

What Are the Early Warning Signs and Symptoms of Multiple Myeloma?

Where Does Multiple Myeloma Initially Occur?

What Are the Stages of Multiple Myeloma?

What Happens in the Advanced Stage of Multiple Myeloma?

In the advanced stages, the symptoms get worse. Frequent infections, bone pain, fatigue, fractures, abdominal pain, anemia, sick feeling, etc., are experienced. The life expectancy during this stage is expected to be another three to four years.

Who Is Prone to Get Multiple Myeloma?

Does Multiple Myeloma Occur Without Any Symptoms?

Multiple myeloma does not exhibit any symptoms in the initial stage. If and when someone experiences any symptom, the disease would be in the advanced stage. Smoldering Myeloma, a type of multiple myeloma, is an asymptomatic and inactive variant.

How Deadly Is Multiple Myeloma?

Though there is no cure for multiple myeloma, prompt identification and treatment of the symptoms caused by myeloma can sustain and improve the quality of life. People under symptomatic management of myelomas were found to live for more than five years. Average survival rates range from three to ten years.

When Can Multiple Myeloma Be Suspected?

Multiple myeloma does not cause any symptoms in the early stages. However, abnormally high levels of M protein in the blood and urine tests done for other purposes can raise suspicion for multiple myeloma. It can be suspected in older people above 50 years of age with persistent back pain for more than a month.

Are Multiple Myeloma and Myeloma the Same?

Multiple myeloma and myeloma are the same. It is just that both terms are used interchangeably.

How Does Living With Multiple Myeloma Feel?

While some multiple myeloma survivors do not have any symptoms and feel alright, some feel fatigued and weak with persistent pain in their back. Numbness, recurrent infections, and itchiness accompany. Generally, they tend to feel sick.

Multiple myeloma is not curable. Treatments are aimed to ease the symptoms, reduce complications, prolong life, and slow down the disease progression.

Should Multiple Myeloma Be Treated?

Usually, treatment is not advised if there are no prevailing symptoms. Careful monitoring of the health condition will be done. Upon the presence of symptoms, symptomatic treatment is recommended. If the symptoms are not treated, the disease progression will be fast, and it may lead to complications like anemia, bone loss, infections, kidney failure, back pain, fractures, etc.

Is there any medication to control the pain due to remission of RA after chemotherapy?

Query: Hello doctor, RA patient for 13 years and on treatment with Methotrexate, Leflunomide. Then suffered from aplastic anemia and ATG treatment done with partial recovery. Presently on Cyclosporine on the advice of hematologist and HCQS on advice of Rheumatologist. Reti iman chemotherapy was done since...  Read Full »

Is chemotherapy safe at the age of 82?

Query: Hello doctor, My relative aged 82 years is suffering from prostate cancer. It was discovered one year ago. Surgery was done eight months ago, and it is still spreading. He is not diabetic. Will chemo might be fatal?  Read Full »

Can infection on penis cause severe itching?

Query: Hi doctor, I am suffering from an infection on my penis. I am using Clotrimazole cream over the infection. Once I miss applying cream a day, the penis gets infected with red patches, pus-filled boils and there is severe itching. My partner is not affected by any problem though we are sexually activ...  Read Full »

Do you have a question on Chemotherapy or Radiation Therapy?