Obsessive Compulsive personality disorder is a chronic, disabling and difficult to treat mental disorder that remains unrecognized in majority of patients due to lack of awareness. 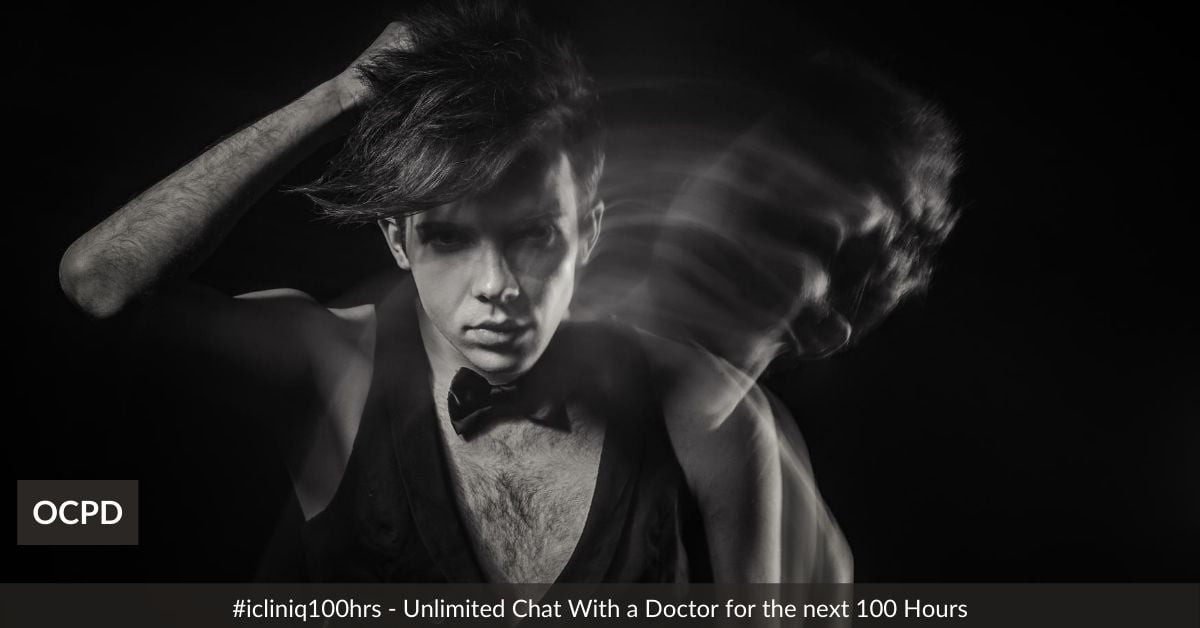 Before you understand what is OCPD I am writing down a summary of a patient suffering from OCPD.

"A 26-year-old woman has a lifetime preoccupation with rules, work, order, and stinginess. Even so, she is in trouble at work because she keeps missing deadlines and has difficulty making decisions. The patient does not realize that she is the cause of her problems—rather, she blames them on others. She comes across as rigid and stubborn in manner and does not like any change in her schedule.

Is uncontrolled anger suggestive of bipolar or borderline personality disorder?
Can OCD be cured?
I seem to be suffering from some kind of grounding disorder. What is it?

She is a case of Obsessive Compulsive Personality Disorder.

This patient’s problems fit into a personality disorder in that she is inflexible in her thinking or behavior, which causes problems in her social or work settings. Typically (as in this case) the patient’s disorder is egosyntonic; that is, she does not recognize her problems originating from within himself but rather blames on others in the outside world. Also, she is stingy with her money, although she works many hours a week. She seems somewhat moralistic about others and about their work habits, especially when they are compared to her own. No obsessions (intrusive, repetitive thoughts) or compulsions (ritualistic behaviors) are noted that are typical of OCD.

Individuals with this disorder do best when treated with a scientific approach and should be provided with documentary evidence and details.

There are very few treatments effective for personality disorders such as this. At times, cognitive interventions can be very well received, leading to a lessening of some maladaptive behavior. For example, a patient can be confronted with a key assumption such as “I must be perfectly in control at all times,” and this assumption can then be discussed and ways created to refute it.

How to Differentiate Between OCD and Obsessive-Compulsive Personality Disorder?

OCPD is a medical condition where people may have perfectionism, overpowering need for order, and mental and interpersonal control. These people will have an obsessive need to follow specific rules and regulations as well as ethical and moral codes from which they will not deviate.

How to Treat a Person With Obsessive-Compulsive Personality Disorder?

The main treatment options for obsessive-compulsive disorder are medication, psychotherapy, and relaxation exercises. For a successful treatment, there should be a strong working relationship between the therapist and the patient.

What Is the Toughest Personality Disorder to Treat?

How Do I Know if I Have OCPD?

You can understand that you have OCPD when you have these symptoms:
- Perfectionism.
- Over-devotion to work.
- Lack of flexibility.
- Not allowing other people to do something.
- Not willing to show affection.
- Struggling with disordered eating.
- Following self-imposed rules.
- Not throwing things away, even if the objects do not have any value.
- Lack of generosity.
- Preoccupation with details, regulations, and lists.

Is OCPD a Serious Disorder?

OCPD is a serious disorder because it interferes with a person's relationship with others. They can even spoil their relationship. If they are treated, these people can improve their quality of life since they are rarely aware that there is a problem that goes untreated.

What Do You Mean by Borderline Personality Syndrome?

How to Diagnose an Obsessive-Compulsive Personality Disorder?

It is very easy to diagnose obsessive-compulsive disorder if you have symptoms like:
- Perfectionism.
- Preoccupation with details.
- A demand that others submit to one's way,
- Inconclusive.
- Devotion to work.
- Restricted expression.
- Over conscientiousness.
- Lack of generosity.
- Hoarding.

How Prevalent Is OCPD?

OCPD is more prevalent among men than women. About 3 to 8 % of people are affected by OCPD, and 1 among 100 people is found to have OCPD in the United States.

Can Both OCD and OCPD Occur in a Person?

OCD and OCPD will usually have related features, but they are two different disorders. A person can have both these disorders. But research indicates that most of the individuals with OCD will not have OCPD.

Can a Personality Disorder Be Controlled?

Is There a Cure for OCPD?

Treatment of OCPD is similar to that of OCD. Cognitive-behavioral therapy is a talk therapy that is very effective in treating OCPD. Some people may also need additional treatment with medications like Carbamazepine and Fluvoxamine to reduce OCPD symptoms.

Since I was a child, I keep repeating some bad words and sentences inside my mind. I do not understand why.

Query: Dear Doctor, Since I was a child, I keep repeating some bad words and sentences inside my mind. I do not understand why. Eventhough such thoughts are prohibited by our religion, my mind keeps saying certain words each minute without my control, sometimes I feel that I just want to hit myself. And al...  Read Full »

My mother was diagnosed with triple personality disorder. How did she get it?

Query: Hello doctor, I am a 21 year old female, and I have seen a lot while growing up. Since I was 6 years old, I started crying every day. Fear grew within me. I started having bad grades since I was 11. I was bullied twice by my friends when I was 7 and second time when I was 13. My parents had no time ...  Read Full »

Article Overview: OCD is a common illness, with varying severity. It is caused by a chemical imbalance in the brain. Treatment includes therapy and medicines. If not treated in time, OCD may progress further and can lead to secondary depression. Read Article

Sometimes, it happens with that we feel our hands are dirty and not washed properly. So, we wash our hands twice over. At times, we have negative thoughts and keep thinking about it repeatedly, or we check the door lock or gas two to three times. But then, we forget about it later and move ahead. Fo...  Read Article

Do you have a question on Obsessive Compulsive Personality Disorder or Ocpd?