The pancreas is a 6-inch long organ present in the abdomen behind the stomach. It does both digestive and endocrinal functions. Its endocrine function includes regulating the blood sugar levels by secreting hormones insulin, glucagon, somatostatin, and pancreatic peptide. 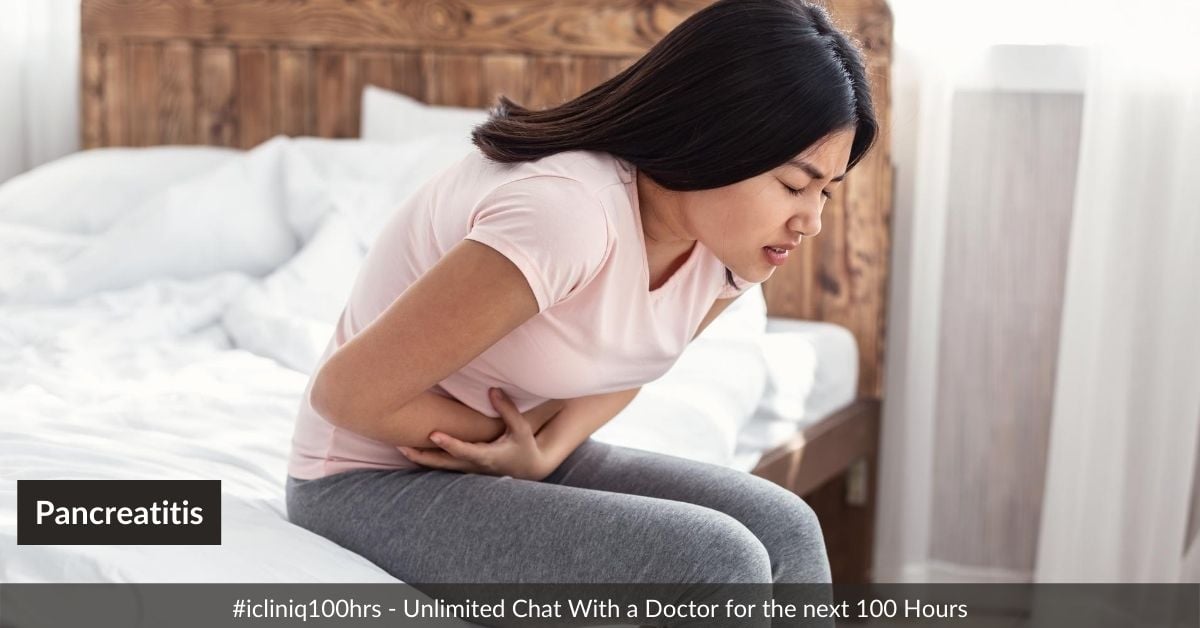 The pancreas is a 6-inch long organ present in the abdomen behind the stomach. It does both digestive and endocrinal functions. Its endocrine function includes regulating the blood sugar levels by secreting hormones insulin, glucagon, somatostatin, and pancreatic peptide. It also helps in digestion by secreting pancreatic juice (digestive juice) through the pancreatic duct into the duodenum.

Inflammation of the pancreas is called pancreatitis. This inflammation can appear suddenly or last for days. Mild cases resolve on their own without treatment, but some severe and acute cases might result in life-threatening complications.

What Are the Types of Pancreatitis?

The two types of are:

What Are the Risk Factors for Pancreatitis?

Gallbladder stones and heavy alcohol use are the two most common risk factors for developing pancreatitis.

This type of inflammation develops quickly. The milder forms do not require treatment, but its severe form should be managed promptly to avoid fatal complications.

The symptoms of acute pancreatitis are:

The common causes of acute pancreatitis are:

1. For mild cases, medicines are given to relieve symptoms as the pancreas heals itself. The treatment includes -

Chronic pancreatitis is a slow and progressive disease of the pancreas, which leads to permanent damage to the structure and function of the pancreas. Men are more commonly affected than women.

The common initial symptoms include:

This can damage the pancreas, which eventually is not able to produce insulin, resulting in type 1 diabetes. At this stage, the patient experiences symptoms of diabetes like increased thirst and hunger, frequent urination, weight loss, fatigue, and blurred vision.

The common causes include:

The following are the treatment options:

If you are suffering from acute or chronic pancreatitis, make sure you consume a diet rich in protein, low in animal fats, and rich in antioxidants.

Food items to include-

How Is Pancreatitis Diagnosed?

If your doctor suspects pancreatitis, he or she might tell you to perform the following tests:

What Are the Complications of Pancreatitis?

Pancreatitis can result in the following complications:

How to Prevent Pancreatitis?

You can reduce the risk of pancreatitis by:

Pancreatitis can be managed with a few alterations in your lifestyle and by taking proper medications. To know more about the treatment options, consult a gastroenterologist online.

First, the pain of pancreatitis starts in the upper abdomen, which may persist for a few days. Severe pain may occur, and it becomes constant just in the abdomen. This pain may reach the back and other areas too. While consuming food, the pain may be sudden and intense or begin as a mild pain that gets worse.

What Are the Warning Signs of Pancreatitis?

How Can You Care for Yourself at Home?

- Consume liquid diet foods such as soups, gelatin, or broth. Those foods allow the inflammation process to get in a better way.
- Stop all alcohol consumption.
- Over-the-counter pain medications may also help.

What Is the Most Common Cause of Pancreatitis?

What Foods Should Be Avoided With Pancreatitis?

How Dangerous Is Pancreatitis?

Pancreatitis may range from mild to severe discomfort or life-threatening sickness. In severe cases, acute pancreatitis lead to serious tissue damage, bleeding, cysts, and infection. Severe pancreatitis can affect or harm other vital organs such as the kidneys, lungs, and heart.

What Foods Are Good for Pancreatitis?

What Is the Best Medicine for Pancreatitis?

The treatment for chronic pancreatitis include:
- Medication includes pain killers such as nonopioids. They might include Acetaminophen and Ibuprofen.
- It might also include mild opioids that do not relieve pain. Nonopioids are also recommended in some patients. If it is not helpful, mild opioids such as Codeine are given. Strong opioids such as Morphine can also be given.

How Long Does It Take to Recover From Pancreatitis?

Patients who are suffering from an acute type of pancreatitis are known to heal within a week. Patients can be discharged from the hospital after a week. In severe cases, the recovery from the treatment will take a long time. If there are any complications, then additional treatment might be required.

Gallstones - All You Need to Know

Article Overview: Gallstones are formed in the gallbladder due to an imbalance in the composition of bile. Read this article to learn about the symptoms, causes, and treatment options for gallstones. Read Article

What Is the Function of Bile? About 1500 ml of bile is secreted by the liver every day. Typically, bile is necessary for digesting fat and absorption of fat-soluble vitamins. It is also a medium through which waste products of metabolism, like bile pigments, cholesterol, drugs, etc., are excreted th...  Read Article

Pain due to pancreatitis is unbearable. Please help.

Query: Hello doctor,My sister has been diagnosed with pancreatitis, portal vein thrombosis, and a blood clot in her small intestines. Doctors cannot seem to pinpoint what is going on in her intestines/ abdomen. They have her on blood thinners. However, no clot will cause this much pain. Her pain is unbeara...  Read Full »