What to Do After Unprotected Sex?

Unprotected sex can happen due to condom breakage, slipping of condom, or forgetting to use the condom at the heat of the moment. Please read the article to know what to do after having unprotected sex. 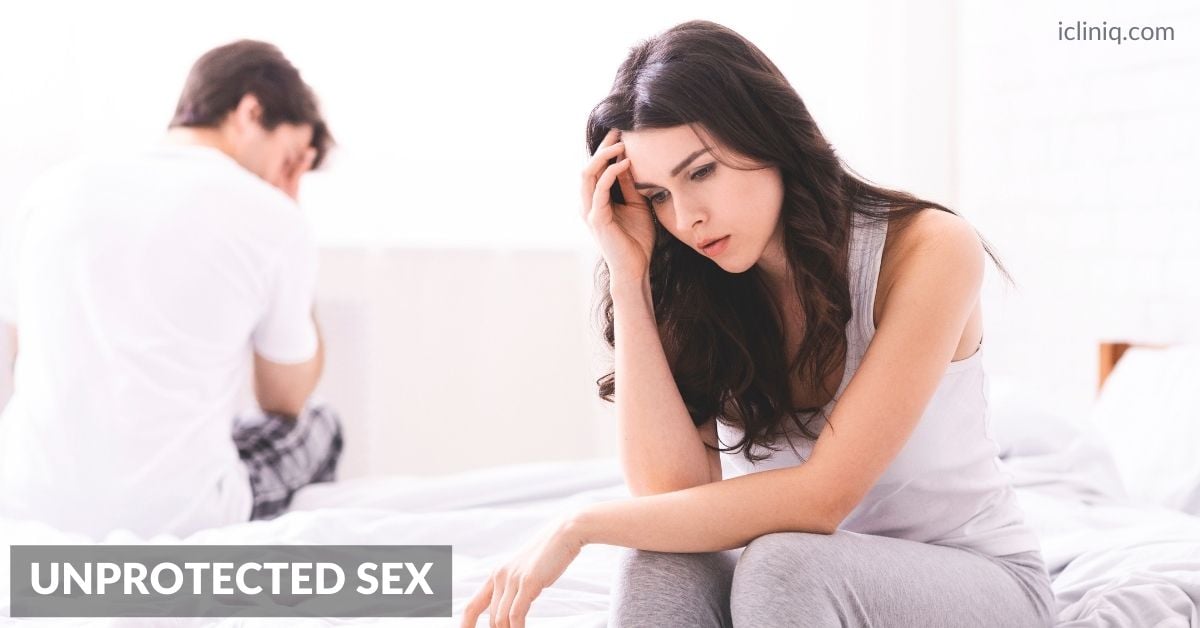 If a person is experiencing a situation wherein, during sexual activity, the condom is broken or has been involved in unprotected sex; the foremost important point is not to panic. This is very common and happens to a huge number of people.

But there are some chances of infections and sexually transmitted diseases (STDs) to occur when involving in unprotected sex. So in order to avoid any, there are plenty of precautions as well as immediate actions, which, when done properly, may reduce the risks altogether. Also, there is an enormous risk of unintended pregnancies as a result of unprotected sex. Let us see some self-care and basic things to do in order to make sure of our personal hygiene and health after unprotected sex.

What Should Be Done When the Condom Is Broken?

Even though it is recommended to use protection when indulging in sexual activity, the efficiency of condoms is only 85%. This means there is a probability of 15% that the condom which we use may fail. In times where you find out that the condom is broken, first, do not panic and stop any sort of sexual activity and step aside from your partner.

Next, go to the bathroom and remove all the fluids around the genitals, that is, vagina, penis or, anus. This will make sure that you are comfortable and removes the risk of any bacterial infection.

Now try to wash gently using lukewarm water or take a shower and remove all the excess fluid from inside, if any. Peeing can also help in washing down any infectious microbes. It is most important that you only wash and never douche. Douching products can cause irritation and inflammation and increase the risk of infection.

Since the majority is an accident, many people do not mentally and psychologically get ready for unprotected sex. And when you realize it is fine to have a wide range of emotions like anger, stress, anxiety, and sadness. It is important that you are in the right mental state and never hesitate to reach out to close family or friends. In case you need emergency contraceptives, try reaching out to the nearest pharmacy, as some of the emergency contraceptives do not require a prescription and are available over the counter.

What to Do Within Three to Five Days of Unprotected Sex?

While some of the STIs are asymptomatic, most of them show some sorts of symptoms such as sores, smelly discharges, itchiness, or pain during urination. So keep an eye on such kinds of symptoms and also your genitals. Schedule an STI test in case of any symptoms to avoid major problems.

Emergency contraceptives are recommended to be taken within 24 hours of unprotected sex as they can reduce the risk of pregnancy by 95%, and the probability reduces to 88% when taken within 72 hours. They prevent pregnancy by blocking biological processes like ovulation. Suppose you have concerns regarding HIV contraction; in that case, post-exposure prophylaxis can reduce the risk of infection, and it is also recommended to be taken within 3 days of unprotected sex.

If in case you want other emergency contraceptives, such as Ella or Paragrad, to be taken 5 to 6 days after unprotected sex, a prescription is required from a healthcare professional. Ella is a pill that delays ovulation by blocking progesterone hormone and hence reduces the chance of pregnancy by 85%. Paragrad is the most effective form of emergency contraceptive, and it is an intrauterine device with a failure rate of one in 1000 people after use. It works efficiently on day 5 as well, and hence timing is also not a factor. But of course, a prescription is needed, and hence it is costly.

What Are the Symptoms and Time Frames of Various STIs?

Chlamydia and gonorrhea are sexually transmitted diseases that can result due to unprotected sex and have symptoms like unusual discharge and pain during urinating. In case of transmission due to oral sex, throat pain and stomach pain are observed. Also, look out for bleeding after sex and in between periods. Since these STIs can have some serious issues, including infertility, it is essential to test for these infections. Waiting for a period of 2 weeks after exposure is the best time for tests as it can produce the most reliable result.

The most feared sexually transmitted infections are herpes, and HIV as both of these diseases do not have a cure. Genital herpes is characterized by blisters that leave open sores and have irritation or burning sensations. When it comes to HIV, the symptoms are very similar to flu and appear after a short term of exposure. Since both these infections have a long incubation period, waiting for a minimum of 3 weeks is advised for taking tests for either of these infections. Another STI which is very hard to spot is syphilis, as it has no symptoms at all. Even though there are no fixed symptoms, there are a few signs with which we can identify the infection, such as,

Since the incubation period for syphilis is much longer than the other infections, it is recommended to wait for at least 6 weeks before taking a test since the results are much more reliable during this time frame.

How to Determine Pregnancy Due to Unprotected Sex?

Every year almost 3 million women in the U.S alone have unintended pregnancies as a result of unprotected sex or due to condom breakage. So if you are experiencing such a situation in your life, do not panic and be aware that you are far from being the only person it has happened to. This does not mean that unprotected sex will always lead to pregnancy, but there is a strong possibility that pregnancy can be expected out of it.

As discussed earlier, birth control pills and contraception can be used to avoid pregnancy if in case you are planning for unprotected sex. Also, in case of unintended accidents such as failure of condoms, there is always emergency contraception which is discussed above. If you fear that you may be getting pregnant, the first that you have to look out for is missing periods. Suppose there is such a sign, take a pregnancy test to confirm. When it comes to taking pregnancy tests, it is detected using the hormone called human chorionic gonadotropin (hCG). It takes time for our body to build upon hCG, so it is recommended to wait for 3 weeks after unprotected sex before taking the test. If the test result is positive, meet your healthcare professional to discuss the next steps.

What Things Should Be Considered for Next Time?

Whether it is accidental or intentional unprotected sex, there are some steps that can reduce the consequences.

Having a good sexual routine is very important since it enhances a person’s metabolism, concentration and has other health-related benefits. But it is also equally important to have safe sexual practices. So, either it is intentional or accidental unprotected sex, there are plenty of steps that can be taken to maintain your sexual health to avoid infections and pregnancy. If you are sexually active, always make use of a barrier method, it can reduce the consequences to a very great intent.

I had unprotected sex next day after taking I-pill. Should I take another pill?

Query: Hello doctor, I had unprotected sex on 11th of this month, and took an I-pill the next day and again on 13th, the condom leaked, should I take another I-pill? I finished my periods on 10th of this month.  Read Full »

Can I have unprotected sex while on birth control?

Query: Hello doctor, I had questions about birth control. If I take a contraceptive, will it be okay for me to have unprotected sex with my partner? And will it cause any complications in the future if we are ready to have a baby?  Read Full »

Can unprotected sex on the seventh day of period lead to pregnancy?

Query: Hello doctor, My wife had unprotected sex with me last night and it was her seventh day of the period. So should I give her Unwanted 72 or is there any chance of getting pregnant and can you tell me the side effects which she will face after taking Unwanted 72?  Read Full »