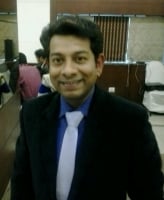 Received 17 upvotes out of 17 votes

The Homeo Clinic is an initiative of Dr. Sandeep Kumar Mishra who is a well known and established doctor of Homeopathy. He completed his B.H.M.S. from the world known institute of India, National I... Read More

Received 17 upvotes out of 17 votes

The Homeo Clinic is an initiative of Dr. Sandeep Kumar Mishra who is a well known and established doctor of Homeopathy. He completed his B.H.M.S. from the world known institute of India, National I... Read More

The Homeo Clinic is an initiative of Dr. Sandeep Kumar Mishra who is a well known and established doctor of Homeopathy. He completed his B.H.M.S. from the world known institute of India, National Institute of Homoeopathy, Kolkata, in 2000.Kolkata is also known as the motherland of homoeopathy in India. He has also successfully completed his M.D.degree in ‘Repertory’ from the National Institute of homoeopathy, which is acknowledged as the Mecca of Homoeopathy in India.

In Kolkata, Dr Sandeep Kumar Mishra, came in contact with many legends of Homoeopaths. At present he is a homoeopathic consultant in a world famous technical institute, the Indian Institute of Technology, Kanpur. He is also managing two of his clinics, in a very posh area of Kanpur City. These clinics are named as “The homoeopathy” and situated at Swaroop Nagar and the other one in a densely populated Gumti No. 5 in Kanpur. It is heartening to write that he has gone beyond the boundries of country and hence we can boast it proudly that his patients are not only from varied population of India but also from USA, United Kingdom and other neighbouring countries.

Dr Sandeep has written his thesis on the ‘Menopausal syndrome’. He delivered a lot of lectures in Homoeopathic seminars and attended several National and International homoeopathic seminars. Since the day he has taken this noble profession he is the integral part of the various social service hospitals. As a philanthropist he devotes his valued time and expertise to the economically backward people as charity. He has also been honoured quite oftenly by various organizations for his dedicated and committed spirit for curing his patients.

There is only one handicap to Homoeopathy that it is very difficult to master it. It is a Divine Science that unless one dedicate his/her life for its study, it may not be possible for him/her to encompass it fully. And hence Dr Sandeep at present is doing research on ‘rods and cones disease of eyes’ with one of the faculties of I.I.T. Kanpur. He is also aspiring high level of proficiency in Gynecological problems in female disorder such as menorrrhagia, metrrohagia,etc..

He firmly believes in the quotation “Homoeopath may fail but homoeopathy never”. He has written articles in the famous daily hindi News Paper “Aaj”. He strongly believes that homoeopathy has the treatment for all diseases; if patient provides proper constitutional symptoms. Patients must narrate full symptoms with minutest details and that’s the reason Dr Sandeep, provides a case narrating data, which is to be filled by the patients, so that they can give a detailed history of their problem.

He also strongly recommends the basic concept of homeopathy as ‘treat the patient not the disease’. Pathology is the end product of disease. Miasma is basic cause of disease among the patients. He also emphasizes that mental symptom is more important and this concept is now gradually accepted by many clinical experts in a variety of diseases like Asthma, IBS, PUS.

Dr. SK Mishra’s philosophy is based on “Homoeopath may fail but homoeopathy never”. On the basis of this philosophy Dr Mishra recommends that, if patient describes all the symptoms, narrates his life style, food habits etc then homoeopathy will certainly give the positive outcome without any side effect.

Homoeopathic treatment is cheap and cost-effective whatever it may be. Careful case taking is the most important part of duty of a learned Homoeopathic doctor. Medicines are not much costly but total number of medicines with its different potencies in a full-fledged Homoeopathic pharmacy may range from seven to ten thousand. However benefits yielded by a unit of Homoeopathic system of treatment will be invaluable when compared to the other approaches

"Thank you very much"

--Someone from Lebanon, 2 years ago

--Someone from Chennai, India, 2 years ago

Start a Live Chat with the Doctor.

What is this Score?

All practicing physicians on iCliniq have a rating on the site. This rating is visible as five stars on their profiles, with zero being the lowest and five being the highest. The rating is based on the feedback we receive from the patients who consulted the physicians. The rating of the internal moderation panel's overview of the physician's work on the site is also taken into account. iCliniq's moderation team also comprises of physicians.

The moderation team's rating is based on: