The Physiological Effects of Smoking on Oral Health

Cigarette smoking or smoking, in both active and passive forms, not only causes tooth-related periodontal diseases but is also a risk factor for serious oral lesions and oral cancers. Please read the article to know the altered physiology due to nicotine and tobacco in smokers.

Contents
What Are the Different Forms of Tobacco?
Periodontal Ligament and Gingiva
On the Alveolar Bone 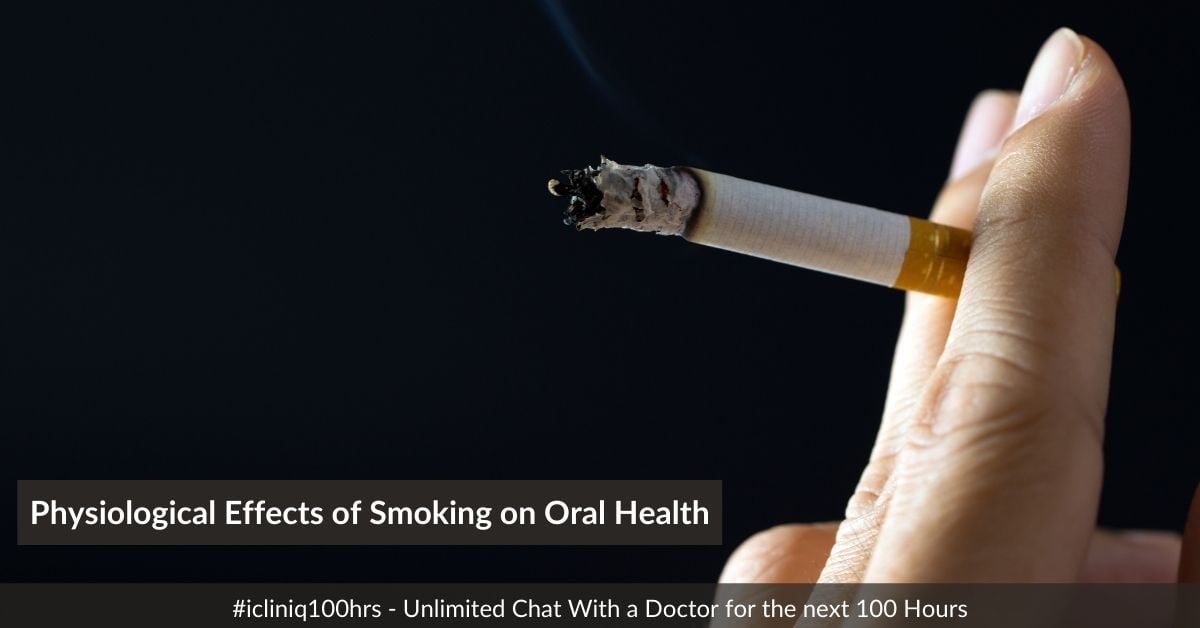 As we all know, smoking is not just an addictive deleterious habit but also a well-established risk factor for dental and periodontal disease. This alters the human microflora normally present in the mouth to be replaced by harmful bacterial or virulent strains and also changes the human immune response that leads to the destruction of the supporting tissues of the teeth (periodontium). The main tissue that is hence targeted by smoking is the periodontium of the tooth. The periodontium mainly comprises three tissues:

The effect of smoking on the periodontium is thus discussed in detail, and the altered physiology in the smoker's teeth hence prompts the dental surgeon to manage these issues depending on the intensity and usage of tobacco by the patient and the adverse impact on oral tissues.

What Are the Different Forms of Tobacco?

Cigarette smoking is usually observed in the upper socioeconomic class, whereas chutta smoking or reverse smoking is observed in low socioeconomic status groups like in fishermen and daily wagers or agricultural labor who most often become the victims of reverse smoking (a form of smoking in which the tobacco usage is through the lit end of chutta in the mouth). Tobacco in any of these forms are indirectly the byproduct of the addictive element nicotine (specifically responsible for addiction) and nitrosamines along with aromatic polycyclic hydrocarbons that are threefold in nature, meaning they act as irritants, toxic compounds, and carcinogens (cancer-causing substances or compounds). Let us observe the altered physiological response due to tobacco on these components of the periodontium:

The immune response of the periodontal ligament is mainly by its,

These four defense components protect the ligament against bacterial invasion and destruction. According to studies conducted from gel electrophoresis, liquid chromatography, and mass spectrometry, it is primarily observed that in smoker's teeth, the most important microbial colonizer in the periodontium is P.gingivalis which is found at significant and higher rates than in the nonsmoking population. The research also proves nicotine to be a potential agent for initiating stress reactions in the gums and serves as an environment modulating or altering factor in the oral cavity that helps the bacteria to thrive in high metabolism. Nicotine is proved to destroy the immune barriers of the pdl and create an inflammatory immune response in the mouth.

2) On the Alveolar Bone:

A. On the Bone Density - The effect of tobacco on alveolar bone as studied by histochemical staining, RT PCR, and ELISA microbiologic techniques show that nicotine of tobacco synergistically progresses alveolar bone loss. In the bone, there are mainly two types of cells:

Nicotine activates an increased amount of osteoclast cells that deteriorate the bone progressively and inhibits the differentiation of osteoblasts (bone-forming cells) as well as mesenchymal stem cells in the bone marrow (the stem cell source of our body mainly responsible for producing bone, cartilage, and fat also known as MSC'S). This dual-action of inhibition of MSC's and osteoblast differentiating cells and the activation of osteoclast cells has an adverse effect on periodontal variables clinically, as observed by the dental surgeon. The alveolar bone height and density are majorly impacted in smoker's mouths.

B. On the Bone Grafts - A number of animal and in-vitro studies also state that nicotine impairs bone healing and bone graft healing (bone grafts are used for the purpose of increasing alveolar height due to either solving the issue of bony defects and traumatic bone loss or for dental implantation). The gene expression of the mRNA molecules is totally altered as per multiple regression analysis techniques in these in-vitro studies impairing the normal bone healing response, proving the negative effects of smoking.

C. On the Developing Tooth Germ - The negative effects of tobacco or nicotine can be observed even earlier in young infants and developing fetuses, according to studies. Mothers who have a smoking habit, especially in the first trimester, significantly gave birth to infants with an increased prevalence of dental caries. The teratogenic effects (malformed effects on the fetus or developing embryo) of smoking have also been observed in the smoking population apart from inhibited or limited formation of preventing layer in the developing tooth buds of infants. Apart from the ill effects of smoking on the bone and periodontal ligament, people who are regular smokers definitely are 7-10 times more prone to developing oral cancer than nonsmokers.

Though nicotine, the chief component of smokable tobacco, is not classified as a carcinogen by IARC (International Agency for Research on Cancer), unburned tobacco and cigarettes have a range of 16-60 carcinogens that would make an individual prone to cancer. Hence the effects of the inflammatory immune response in smokers are seen as the following dental diseases:

To conclude, the smoking population, irrespective of age, gender, and socioeconomic status, needs a regular six-monthly dental follow-up and related procedures from the dental surgeon to prevent the above dental diseases as well as to prevent the risk of oral cancer. The physician or dentist-guided behavioral counseling and medications to stop smoking behavior can be a useful prevention modality of oral cancer and dental disease.

What causes bad breath and white coating on the tongue?

Query: Hi doctor,I have bad breath and my tongue is white even when I brush really hard for a long time. I have this issue for years. I have consulted a doctor about this issue. But nothing helps me.  Read Full »

What are the first signs of oral cancer?

Query: Hi doctor, I have been very worried about my health lately. I would like to preface this by saying that I have been experiencing anxiety off late and I have a suspicion that some of these symptoms could be related to that. I am currently weaning off of Prednisone, which I have been taking for an all...  Read Full »

How can bad breath be stopped and prevented?

Query: Hello doctor, I am facing a problem with bad smell from mouth. I have faced this problem six to eight months before after my accident and I took heavy-dose antibiotics. I have shown to a dentist and I have cleared all my tooth problems. After that also, I am facing this bad smell. I am taking Omepr...  Read Full »

Do you have a question on Tobacco or Bad Breath?