Tobacco smoking causes not only cancer of mouth, eosophagus, larynx but also has a role in cancer of cervix, pancreas, kidney and bladder. It also causes bronchitis,allergic diseases and stroke 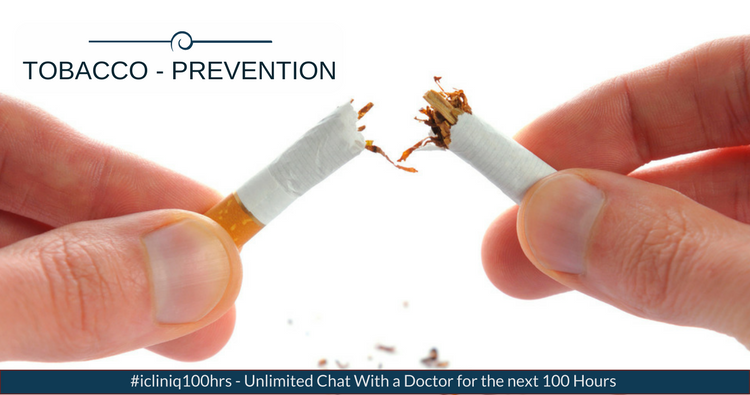 In many countries, tobacco is consumed both in smoked (including cigarettes and bidi) and smokeless forms(including Zarda, Gutka and inhalation of snuff). The prevalence of such consumption is alarmingly high to a level of about 20%. The harmful effects of both smoked and smokeless forms are due to its active ingredient, nicotine.

Smoking causes not only cancer of mouth, eosophagus, larynx but also has a role in cancer of cervix, pancreas, kidney and bladder. It also causes bronchitis, allergic diseases and stroke.

How Do You Know if You Have Nicotine Dependence?

Signs which point out that you might have Nicotine dependence include:

If you have any of these signs then you must consult a Psychiatrist who would assist you to quit tobacco with the help of medications and Psychotherapy.

What Can You Do to Kick the Habit?

Remember, your goal should be complete abstinence and even occasional smoking and chewing tobacco is harmful. Contact icliniq to get help via online therapy and counseling.

Dr.Surabhi is an expert in the field of Psychiatry. She is experienced and well-versed in all the treatment modalities in Psychiatry.

Article Overview: Do you or someone you know are hooked up to a drug and not being able to withdraw from it? This article discusses addiction and evidence-based treatment approaches. Read Article

Introduction: People from all phases of life can experience issues with drug usage regardless of age, race, or the reason for which they started using the drug. Drug addiction does not necessarily have to be illegal drugs. Even prescription drugs like painkillers, sleeping pills, and tranquilizers c...  Read Article

Article Overview: PVD (peripheral vascular disease) is a condition that commonly affects the arteries in the legs of older adults, smokers, and hypertensive patients. Read about its symptoms, risk factors, diagnosis, and treatment options. Read Article

What Is PVD Peripheral Vascular Disease or PVD is a disease of the arteries of the legs caused by deposition of cholesterol and other fats. Peripheral artery disease (PAD) is the most common form of PVD.This causes less blood to flow through the arteries and causes symptoms from this reduced blood s...  Read Article

Have my gums receded because of placing smokeless tobacco in the same spot for years?

Query: Hello doctor,I am a 32-year-old male. I have used a smokeless tobacco called Swedish Snus for going on four years now, always in the same spot. My gums have severely receded in this area. I am otherwise healthy. I recently made an appointment with a periodontist but I am terrified I may have gum can...  Read Full »

Do you have a question on Prevention Of Tobacco or Nicotine Dependence?