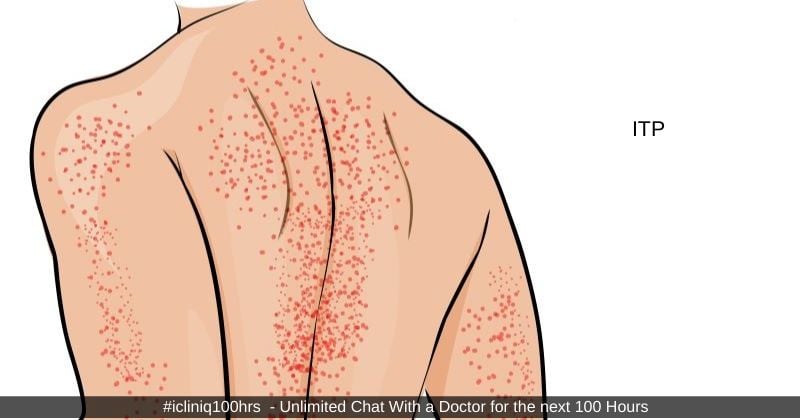 What Is Idiopathic Thrombocytopenic Purpura (ITP)?

Idiopathic thrombocytopenic purpura, now called ITP or immune thrombocytopenia, is an immune blood disorder where the blood does not clot properly. It can result in severe and spontaneous bruising and bleeding due to low levels of platelets in the blood.

The bone marrow is responsible for platelet production, and these platelets clump together to stop bleeding by forming a blood clot. The blood clot seals the small tear in the blood vessel walls. If the platelet level is low, it results in slow blood clot formation and prolonged bleeding. This condition also increases the risk of internal bleeding or bleeding under the skin.

ITP patients have purpura, which is numerous purple bruises on the skin and mucous membranes. Sometimes, these bruises look like petechiae (pinpoint red or purple dots) on the skin, which resembles rashes. Younger women and older men are more susceptible to this condition. Children become more susceptible to ITP after viral infections like chickenpox, measles, and mumps.

What Are the Types of Idiopathic Thrombocytopenic Purpura?

The types of ITP are:

What Are the Symptoms of Idiopathic Thrombocytopenic Purpura?

Some patients do not have symptoms, but if they do, the common signs and symptoms of idiopathic thrombocytopenic purpura include:

What Are the Risk Factors for Idiopathic Thrombocytopenic Purpura?

How to Manage Idiopathic Thrombocytopenic Purpura in Pregnancy?

In pregnant women, if the platelet count is not very low, then treatment is not required, and only regular monitoring will do. But if the counts are very low, it can result in severe bleeding during and after delivery. Consult a doctor to come up with a treatment plan.

How Is Idiopathic Thrombocytopenic Purpura Diagnosed?

If a person is experiencing symptoms of ITP, the doctor will take a complete medical history and perform physical examinations. Then if needed, the doctor will suggest getting the following tests done:

What Are the Treatment Options for Idiopathic Thrombocytopenic Purpura?

Treatment is not usually necessary for kids with acute ITP, as it will heal without treatment in about six months. In adults with no symptoms or almost normal platelet count, treatment is unnecessary. But, the doctor will monitor the platelet and other blood cell count to check if treatment is needed. The treatment options in symptomatic patients are:

In patients who have severe ITP and if medicines are not helpful, then the doctor will suggest surgical removal of the spleen (splenectomy). This surgery is not performed in kids because most children get better on their own. Getting the spleen removed increases the risk of infections.

What Are the Complications of Idiopathic Thrombocytopenic Purpura?

But the prolonged use of corticosteroids can result in:

Idiopathic thrombocytopenic purpura is characterized by easy bleeding due to unusually low platelet count. Children who develop ITP often recover on their own, but in adults, this condition is usually long-term. Patients with symptoms require treatment which may include medications or surgery. Certain precautions and preventive measures, if taken properly, can help prevent this condition.

ITP is the immunologic destruction of platelets, and it does not turn into serious blood disorders like aplastic anemia or leukemia. Although, aplastic anemia is characterized by pancytopenia, which includes anemia, thrombocytopenia, and leukopenia.

How Can We Cure ITP?

Spontaneous recovery occurs in 90% of cases of acute ITP, while only less than 10% of cases of chronic ITP recover spontaneously. The life expectancy depends on the treatment plan and reduced risk for life-threatening complications.

What Are the Treatment Modalities for ITP?

Treatment is directed at reducing the level and source of autoantibodies and reducing the rate of destruction of sensitized platelets. This is possible by corticosteroid therapy, immunosuppressive drugs, and splenectomy. The beneficial effects of splenectomy in chronic ITP are due to the removal of the major source of autoantibody synthesis. Platelet transfusions are helpful as a palliative measure only in patients with severe hemorrhage.

Does ITP Compromise the Immune System?

Idiopathic Thrombocytopenic Purpura is also known as immune thrombocytopenic purpura, and it is characterized by immunologic destruction of platelets and normal or increased megakaryocytes in the bone marrow. It is an autoimmune disorder in which antibodies (IgG) are produced against platelet antigens. The antibody-coated platelets are destroyed by phagocytic cells in the spleen.

Can Stress Affect the Platelet Count?

Stress usually causes an increase in platelet count. Stressful life events and anxiety can lead to an imbalance in the immune system that contributes to the development of autoimmune diseases or suppressed immune responses. Physical, physiological, and resultant oxidative stress in the body triggers the episodes of ITP. ITP patients appear to face greater levels of fear and are more emotionally attacked than those without the disease.

Life expectancy depends on the treatment plan. Chronic ITP occurs more commonly in adults, particularly in women of child-bearing age (20 to 40 years). The disorder develops insidiously and persists for several years. Though chronic ITP is idiopathic, similar immunologic thrombocytopenia may be seen in association with AIDS and autoimmune thyroiditis.

What Foods Should Be Avoided if You Have a Low Platelet Count?

Certain foods have blood-thinning effects, so we should avoid certain foods if we have ITP. They are meat, fast food, canned food, garlic, onion, saturated fats found in whole dairy products, non-plant-based oils, such as butter and margarine, tomatoes, berries, food in boxed and frozen food aisles.

Does ITP Go Away?

ITP is the immunologic destruction of platelets. For most adults with ITP, the condition is chronic (lifelong). ITP may happen suddenly and go away in about six months, or it may be ongoing if chronic and last for years. Treating ITP helps to come out of the disorder.

Does ITP Get Worse Over Time?

Chronic ITP is explained by the formation of anti-platelet autoantibodies, usually by platelet-associated IgG humoral antibodies synthesized mainly in the spleen. Some of the antibodies directed against platelet surfaces also interfere in their function. Sensitized platelets are destroyed mainly in the spleen and rendered susceptible to phagocytosis by cells of the reticuloendothelial system. But unlike autoimmune disorders, it is not progressive, but the risk of bleeding increases.

Can You Die From Low Platelet Count?

In a healthy body, the lifespan of platelets is about ten days. When there is internal bleeding, the platelet count falls below 10,000 per microliter. Severe thrombocytopenia can cause bleeding in the brain, which can be fatal.

What Are the Causes of Thrombocytopenia?

What Are the Drugs Associated With TTP?

What Is the Effect of Honey on Human Platelets?

Can Low Platelets be Genetic?

In inherited thrombocytopenia or familial thrombocytopenia, the low platelets are formed by a genetic mutation and not by autoantibodies, as in the case with primary ITP. But currently, it is not usually considered an inherited disease unless multiple family members are diagnosed with ITP.

What Is Acute ITP?

Acute ITP is a self-limited disorder seen most frequently in children following recovery from a viral illness such as hepatitis C, infectious mononucleosis, HIV infection, or an upper respiratory illness. The onset of acute ITP is sudden, but recovery occurs within a few weeks to 6 months.

Is surgery inevitable for an enlarged prostate?

Query: Hi doctor, My father is having enlarged prostate and has to undergo prostatectomy surgery. But, it is getting delayed due to ITP (idiopathic thrombocytopenic purpura). Right now he is under urine catheter. From past 12 days he is using Silodal-D 8 mg. Doctor said that after 20 days the prostate glan...  Read Full »

Are there abnormalities in my blood reports?

Please give your feedback regarding my preventive health screening reports.

Query: Hello doctor, I am a 32 year old male. I recently went for a preventive health screening. I need your valuable feedback regarding my reports.  Read Full »

What Does Sleep Orgasm Mean?

What Does A Swollen Lymph Node In The Female Groin Indicate?

Do you have a question on Low Platelet or Blood In Urine?