Hormone therapy for cancer is beneficial in some hormone-associated cancers. This article helps you to understand more about this therapy. 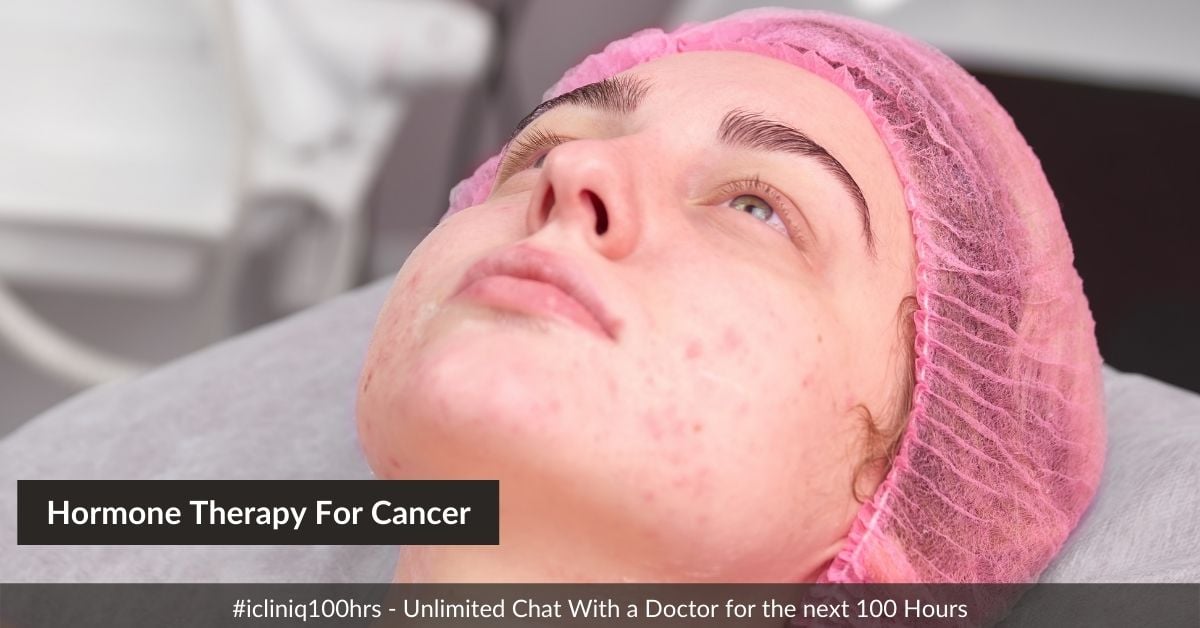 Hormones are peptides or a steroid that is produced by tissue and transferred to the bloodstream to the target organs for their maturation. They are helpful in the growth and development of an individual. The endocrine system is a network of all the glands that produce hormones. Hormone therapy is a treatment done using certain medicines that helps in blockage or lowering the number of hormones in the body which ultimately helps to slow down or stop the growth or progression of cancer.

What Are Hormone-Dependent Cancers?

Certain cancers are dependent on hormones or hormone-producing cells. Hormones also play a major role in the progression of cancer. Some of the hormone-dependent cancers are breast, prostate, womb cancer (also called uterine or endometrial cancer), and ovaries.

Certain risk factors make the person prone to develop such cancers, which are as follows:

How Does Hormone Therapy Work?

A few cancers, as mentioned above, use hormones to develop or grow. It indicates that the cancer is either hormone-sensitive or dependent on the hormone. The hormone therapy functions opposite as it uses certain medicines to limit or stop the excess hormone production in the body and helps in slowing down the growth of cancer. But it is not guaranteed to work in all cancers.

What Are the Types of Hormone Therapy?

The decision of hormone therapy is made by your specialist after your complete examination and assessment. It is dependent on various factors like the type of cancer, a person's medical history, etc.

Following Medications Can Be Used for Breast Cancer:

Tamoxifen's mechanism of action is to block the estrogen receptors. It is one of the most commonly used hormone therapies for managing breast cancer. It is indicated in women who are either having periods (premenopausal) and those women who have had their menopause ( post-menopausal).

It is also helpful in chemoprevention. In it, hormone therapy (Tamoxifen or Raloxifene) is prescribed to patients who are at high risk of developing breast cancer. Although, it is important to know that it is not indicated for all cancers.

This is indicated in women who have had menopause. Ovaries stop the production of estrogen after menopause. But, the body is capable of transforming other hormones, called androgens, into estrogen, although in small amounts. Aromatase is the enzyme that helps in performing this transformation. Aromatase inhibitors act by blocking aromatase, and thus, the transformation is stopped.

Various types of aromatase inhibitors are Exemestane, Anastrozole, and Letrozole.

The pituitary gland is situated in the brain, which produces the luteinizing hormone (LH). This hormone helps in controlling the hormone production from the ovaries. LH blockers are medicines that help in stopping the production of luteinizing hormones. Their mechanism of action is blocking the signal sent from the pituitary gland to the ovaries. Hence, the ovaries stop producing the hormones estrogen or progesterone.

This is indicated in females who have not attained menopause. Goserelin (Zoladex) is one such medicine used for breast cancer.

Following Medications Can Be Used for Prostate Cancer:

Bicalutamide, Cyproterone acetate, and Flutamide are some of the anti-androgens used for hormone therapy.

Gonadotropin-releasing hormone (GnRH) blockers help in blocking the messages from the hypothalamus, which is situated in the brain. Hypothalamus instructs the pituitary gland to produce the luteinizing hormone. The luteinizing hormone then sends a message to the testicles to produce testosterone. Hence, blocking GnRH ultimately stops the testicles from producing testosterone. Degarelix is a GnRH blocker used for hormone therapy.

There are some recent additions to hormonal treatments for prostate cancer. They are as follows:

Hormone therapy for cancers is useful in certain types of cancers. Consult a physician or specialist online to know more about this therapy.

What Cancers Can Be Treated by Hormone Therapy?

Hormone therapy is used in conjunction with other treatment approaches for breast cancer, prostate tumors, adrenal cancer, and endometrial cancer which multiply under the influence of hormones.

In treating breast and prostate cancers, hormone therapy is effective because both hormone therapy and chemotherapy are systemic therapies that travel throughout the body and have a systemic action by spreading to the body parts away from the original tumor site.

How to Know if Hormone Therapy for Cancer Is Working?

A decrease in the level of hormones in blood and reduction in the tumor size indicates that the hormone therapy is working.

What Is the Effect of Hormone Therapy on Cancer?

Breast and prostate cancers develop with the help of hormones. Therefore, altering the behavior of hormone receptors or hampering the body's hormone synthesis ability reduces the progression or stops the spread of cancer.

When Is Hormone Therapy for Cancer Started?

Why Is Hormone Therapy Advised in Cancer?

Hormone therapy for cancer is recommended in the following cases:
- To reduce the progression rate.
- To prevent recurrence of cancer.
- To stop the spread of the tumor.
- To provide relief from the symptoms of cancer.
- In men with prostate cancer who cannot undergo surgery or radiation therapy.

Does Hormone Therapy for Cancer Cause Side Effects?

How Long Is Hormone Therapy Needed for Breast Cancer?

Hormone therapy for cancer is usually given for a period of five to ten years. It is also provided in people in whom there is a recurrence or metastasis of the tumor.

Do Hormone Therapy for Breast Cancer Result in Weight Gain?

Due to an alteration of the hormone levels in the blood following hormone therapy, weight gain is seen in people treated for breast cancer with hormone therapy.

Can the Immune System Be Affected by Hormone Therapy?

Hormone therapy for cancer has a suppressive effect on memory and naive CD8 cells and therefore has a long-standing adverse impact on the bone marrow of an immune system.

How Successful Is Hormone Therapy for Cancer?

Hormone therapy is successful in reducing the chance of recurrence and metastasis of breast cancer.

Is Weakness Associated With Hormone Therapy for Cancer?

As the hormone therapy for cancer increases the body fat and reduces the muscle tissues, it physically weakens the body and leads to joint aches and muscle aches.

What Are the Withdrawal Effects of Hormone Therapy for Cancer?

In some individuals, stopping hormone therapy for cancer can shorten the lifespan.

What Are the Drugs Used in Hormone Therapy for Cancer?

Article Overview: The incidence of cancer being diagnosed during pregnancy has increased because of delayed child-bearing age, advanced imaging techniques during antenatal care, and the known occurrence of age-dependent malignancies. Read Article

Cancer, as of now, is considered to be a disease of lifestyle and majority of cancers occur in middle and late age. With the postponement of marriage and childbearing to late thirties, it is not surprising, that number of women diagnosed with pregnancy and concomitant cancer is increasing. Further, ...  Read Article

Query: Hi doctor, My son is 11 years, weight 33 kg, height 134 cm, father's height 165 cm, mother's height 155 cm. The increment in height in the last 2 years was 4 cm/year. Does he need growth hormone therapy? What are the investigations needed?  Read Full »

Do you have a question on Cancer or Hormone Therapy?