Growths in the oral cavity commonly form on the lips, floor of the mouth, sides of the tongue, and roof of the mouth. Read the article to know about the most common oral lesions, their differential diagnosis, and treatment. 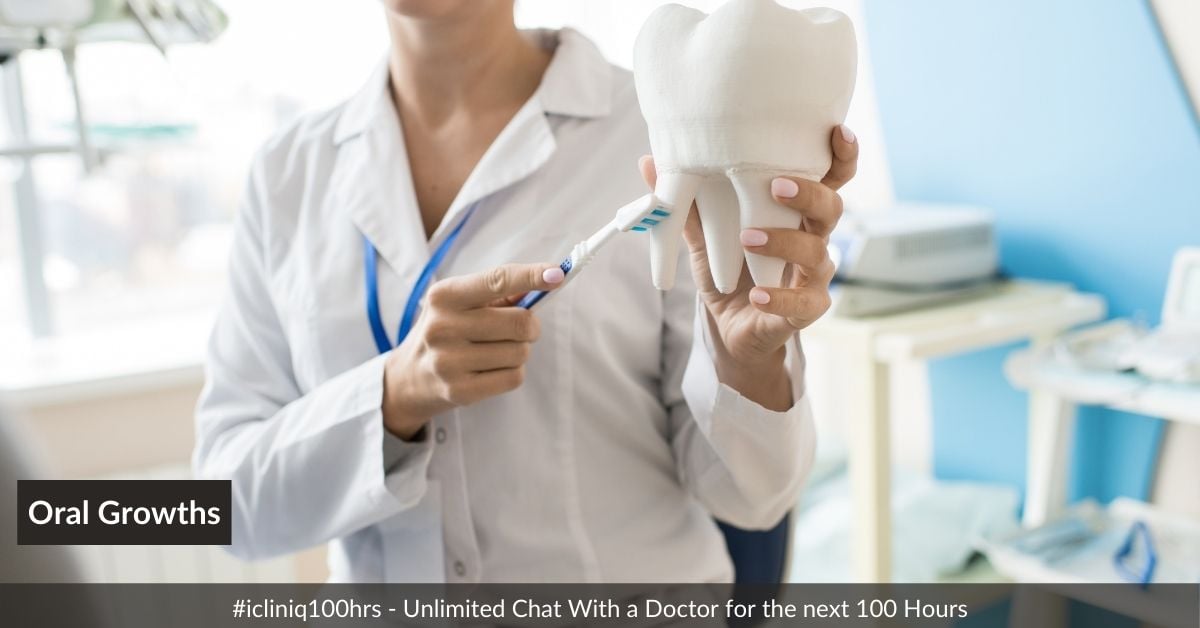 The human body encounters a lot of growths in which the oral cavity is also not lagging. These growths can occur at any site in the oral cavity, namely gums, cheeks, or lips (both upper and lower). The majority of them are painless and benign in nature. They even resemble the native tissue. Hence, individuals are least concerned with their potential to turn malignant (cancerous). In the beginning, the size is very small and often non-aggressive. But later, some can undergo dysplastic changes and become untreatable tumors. These conditions may appear as mucocele, cystic swelling, or lipoma, which is popularly called a universal tumor.

It is popularly called a universal tumor, which affects males more than females. It is a benign tumor of mesenchymal cells and is associated with certain syndromes like neurofibromatosis or Gardner syndrome. Histopathology depicts the presence of adipocytes. The majority of oral lipomas (50 %) are found in the buccal mucosa followed by the tongue, floor of the mouth, buccal sulcus (or vestibule), palate, lip, and gingiva. It commonly affects people between the ages of 40 and 50 years. There are a variety of causes suggested for lipoma, among which prime reasons are trauma, infection, chronic irritation, and hormonal imbalance.

Fibromas are defined as slow-growing and asymptomatic benign tumors of connective tissue origin occurring most frequently in buccal mucosa with females commonly affected. Histologically they show proliferation of fibroblast and collagen fibers. The primary cause of fibroma is chronic irritation characterized by cheek or lip biting or ill-fitting dentures. The appearance is usually firm and nodular, but they can be soft also, and the color is comparatively lighter than the surrounding due to reduced vascularity.

Related Topics
What are the first signs of oral cancer?
There is a painless swelling inside the lips. Could it be a cancer?
From the photos, kindly tell me if the fibroma on my soft palate is cancerous.

Mucocele refers to a non-cancerous slow-growing bluish or translucent swelling. The etiology of mucocele is either disruption or blockage of the salivary gland ducts (predominantly minor salivary glands). It could be followed by extravasation and collection of mucins in the connective tissue. Another reason that is associated with this lesion is local trauma. However, it can be due to unknown reasons also. There is no gender prediction stating both males and females are equally affected. It occurs most commonly in the inner aspect of the lower lip, but in some cases, it can also occur in buccal mucosa, tongue, and floor of the mouth.

It is a non-neoplastic inflammatory hyperplastic growth of the connective tissue which arises due to an exaggerated response towards either a localized lesion or continuous irritation like the presence of calculus or defective restorations, traumatic injury, and hormonal disturbances. This lesion's appearance is an exophytic growth with a smooth and shiny surface having numerous hemorrhagic papules that may show ulcerated appearance also. Histologically it shows the presence of vascular proliferation lined by thick endothelial cells with epithelium ranging from being hyperplastic to thin or even ulcerated. The most common site of occurrence for pyogenic granuloma is gingiva, followed by lips, tongue, palate, and buccal mucosa. Radiographic changes may occur but at a very later stage.

Mucocele and fibroma can pose a diagnostic challenge because of their resemblance to pathologies like peripheral ossifying fibroma, hemangioma, or lipoma. For firm diagnosis, histopathological examination and correlation with the clinical presentation is a must.

Pyogenic granuloma is associated with a preference for gingiva and occurs in the young age group compared to lipoma, which shows a tendency to the buccal mucosa and older age group at 40 to 50 years. Similarly, peripheral ossifying fibroma has a preference for the maxillary anterior region. It occurs in the age group of 20 to 30 years, while lipoma predominantly occurs on buccal mucosa at 40 to 50 years. As compared to pyogenic granuloma, peripheral ossifying fibroma has irregular borders, and the consistency is hard most of the time.

Mucocele occurs in any gender, while fibroma occurs predominantly in females. A fibroma is lighter in color, but pyogenic granuloma is bright red in color. Lipoma has a yellowish-orange appearance, while hemangioma has a bluish-red tinge. Hemangioma occurs in childhood with the preference on the tongue, while papilloma shows predominance on the gingiva.

Although the lesions are benign in nature, they may interfere with speech and mastication and can cause a lot of discomfort by making eating difficult. Even esthetics is compromised. Treatment comprises both surgical and non-surgical phases. Non-surgical treatment involves the removal of local irritants by scaling and root planing of the adjacent teeth. It is followed by surgical treatment, which includes marsupialization, laser ablation, and excision by scalpel or electrosurgery.

Excision by a laser has an advantage of minimal postoperative pain, minimal bleeding, no need for suturing the site, and excellent healing within a week. However, the chances of recurrence are more with lasers than electrocautery or scalpel.

The best treatment for almost all the benign growths is simple surgical complete excision followed by recalls and minimum follow-ups for at least six months to a year.

Clinicians often encounter a large number of overgrowths in the oral cavity. These growths could be in a group or in isolation. Every enlargement should be biopsied as early as possible so that the chances of its malignant transformation are reduced. Further, the treatment options should be well updated with all the clinicians for a perfect prognosis and good results. Recalls are necessary for the patient because different individuals have different genetic as well as environmental susceptibility to particular irritants.

Are Growths in the Oral Cavity Normal?

The majority of the growths in the oral cavity are non-cancerous. The common causes of non-cancerous growths of the mouth include warts, yeasts, and trauma from rubbing against the sharp teeth or repeated biting

What Does Cancerous Growth in the Oral Cavity Look Like?

Oral cancer may appear in different ways, like a lip or mouth sore that does not heal. They can occur in the lips, gums, tongue, inner lining of the cheeks, and roof of the mouth. In addition, they can be seen as a growth or lump inside the mouth.

Does the Growth in the Oral Cavity Resolve on Its Own?

Most of the growths in the oral cavity go away on their own within two to three weeks. However, if they persist after three weeks, consider consulting a dentist.

Are Oral Fibromas Hard or Soft?

Oral fibromas are benign scar-like reactions to existing long-standing oral cavity irritation. They are also known as reactive hyperplasia, traumatic fibroma, focal intraoral fibrous hyperplasia, oral polyp, or fibrous nodule. Oral fibromas can be hard or soft and can be smooth or rough.

How Does Oral Fibroma Appear?

The appearance of the oral fibroma will vary depending on the composition of the fibroma. However, they are mostly of the same color as the oral cavity and can be white or red when bleeding.

What Percentage of Tumors in the Mouth Are Benign?

Most oral tumors are non-cancerous (benign), accounting for around 80 percent of all the tumors seen in the oral cavity. Cancerous tumors are estimated to be around 1 to 6 percent of the tumors.

How to Diagnose Oral Cancer?

To diagnose oral cancer, the dentist will examine the oral cavity to identify sites of irritation or white patches. If they find something doubtful, they will advise a biopsy, where they take a sample from the site, which is sent for histopathological examination.

How Does Oral Papilloma Appear?

Oral papillomas are non-cancerous growths in the oral cavity. They are wart-like growths seen in lips, gums, tonsils, and the back of the throat. They often appear as pink or white elevated lesions of different sizes.

How to Remove Oral Papillomas?

There are three main ways to remove oral papillomas, and they are:
- Surgical removal (traditional or laser).
- Cryotherapy (freezing the lesion).
- Injection of interferon alfa-2B.

Oral fibromas will grow over weeks or may take months to grow to their fullest size. They can attain a size of about 1 cm in diameter and, in some cases, may even grow bigger.

Why do I have a water bubble under my tongue?

Query: Hello doctor, I have had swollen glands for a few months now. I have seen an ENT doctor for the same. He ran a blood test and it came back normal. He told me give it a month and they should go down. They have not gone down or grown. Before going to the ENT doctor, I also visited a dentist and got to...  Read Full »

Article Overview: Oral cancer is becoming extremely common due to the increase in the use of tobacco products and limited awareness. Like any other malignancy, oral cancer also does not show symptoms in the early stages. So, this article explains in detail how to fight against oral cancer at early stages. Read Article

What Is Oral Cancer? Any uncontrolled growth of cells and their invasion of the adjacent structures is called cancer. Oral cancer is one such development in areas associated with the mouth. Oral cancer is becoming extremely common due to the increase in the use of tobacco products and limited awaren...  Read Article

Is pus secretion from gallbladder bed after gallstone removal surgery a concerning issue?

Query: Hello doctor, My mother has undergone a gallstone and uterus removal surgery simultaneously. From the day of operation, she is having pus secretion from the gall bladder bed. What may be the possible reasons behind this?  Read Full »

Do you have a question on Oral Cancer or Fibroma?