The habit of placing your tongue forward between upper and lower anterior or posterior teeth while you swallow is called tongue thrust. Please read the article to know about its effects on your teeth and the treatment options. 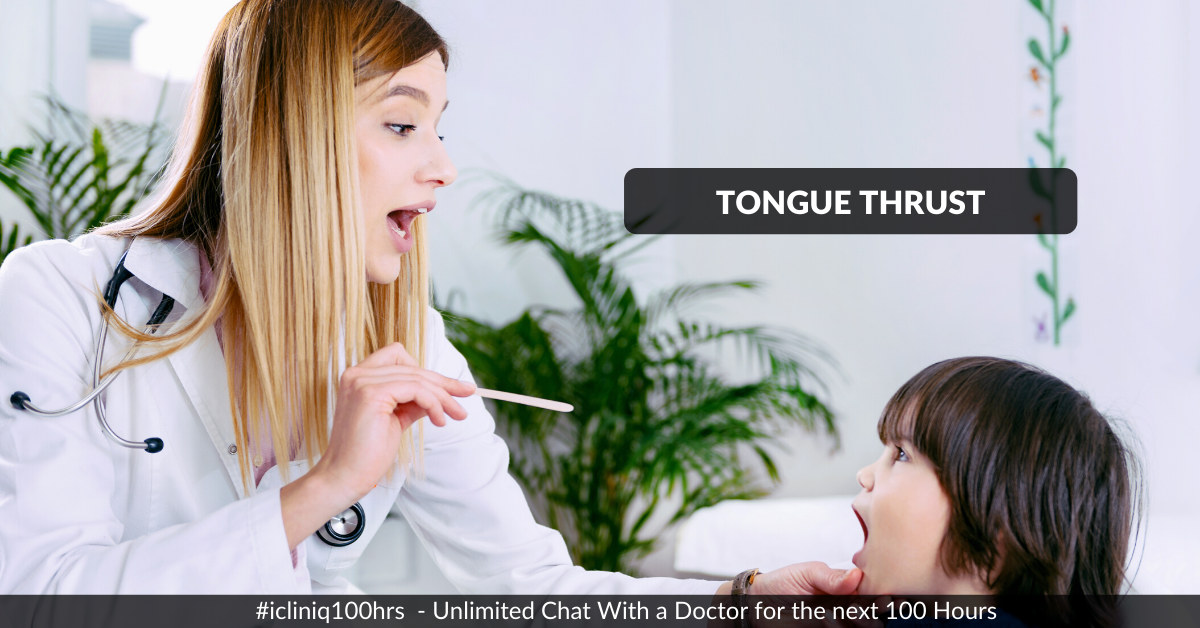 What Is Tongue Thrust?

Why Is Tongue Thrusting Bad?

As we all know, our tongue is a very powerful muscle and is strong enough to push our teeth out of their natural position, which causes loss of equilibrium. An individual swallows around 2000 times a day. In tongue thrusting, there is improper swallow. This improper swallowing becomes more apparent when it is persistent for a longer duration of time. It can also lead to open bite and malocclusion, in which only your back teeth touch together when you swallow and anterior teeth will not touch.

How Is Tongue Thrust Habit Classified?

The tongue thrust habit is classified into:

I) Primary and secondary.

There are different schools of thought explaining about tongue thrust:

Related Topics
I have crooked teeth and broken decayed tooth. Do I need extraction for braces?
I feel like my teeth are loose and moving in front. Please help.
Is it possible to correct my farly placed lower jaw through braces?

According to Proffit - Whenever there is an open bite due to thumb sucking habit, the tongue tries to close the open bite by wrong placement, which accentuates the deformity. Placing the tongue between anteriors for making an anterior lip seal is successful achieved.

According to Equilibrium Theory - The pressure generated by tongue is very less to affect the equilibrium, but if there is forward resting posture of tongue on anteriors for a long duration, then even if pressure exerting is very light then it could be a precipitating factor for malocclusion.

1) In younger children with normal occlusion in whom it represents a transitional stage during normal physiologic maturation.

2) In individuals of any age with displaced anteriors.

So, tongue thrusting habit or swallowing pattern can be considered as a result of displaced incisors and not the cause.

It is when the teeth are in normal contact during swallowing. If there is excessive proclination of maxillary incisors, treatment of tongue thrust should be done after retraction of incisors. The patient should be educated about swallowing exercises with sugarless mint and should be instructed to follow the instructions 40 times a day and the patient is asked to maintain the record for the same. During the second appointment, there should be improvement in swallowing pattern and the patient should swallow correctly at will.

Another way to fix this bad habit is with the use of orthodontic rubber bands. First, place the rubber band on the tip of your tongue, then press the tip of the tongue right behind your upper front teeth. After that, bite normally and avoid forward biting. Do not panic if you accidently swallow the rubber band, as it will pass through your system without any harm. Initially, this exercise may be a little difficult to do, but with practice, you will master this exercise and soon you will be free of tongue thrusting. So, it is advised to do two sets of 30, once in the morning and once in the evening for better results. After this, if the problem still continues, soldered lingual arch wire having short and sharp spurs is used.

It is when the teeth are apart during swallowing. It can cause malocclusions, such as poor occlusal fit and generalized anterior open bite. Open bite may not be present if the tongue is seated evenly at top.

The malocclusion is treated first. Muscle training should begin when treatment is in the retentive phase. Maxillary lingual arch appliance is necessary and as prognosis is not very good, the chances of relapse may be there.

When the tongue thrust swallowing pattern is retained beyond age it is defined as retained infantile swallow. Individuals suffering from this swallow, have occlusion only on one molar in each segment. They have difficulty in breathing and are sensitive to gag reflux.

A tongue crib can be used with 3 to 4 projections and should extend to the cingulum of lower incisors. Prognosis is poor.

How Can Tongue Thrusting Be Withdrawn?

Tongue thrusting can be stopped by practicing certain exercises at home. Place a sugar-free candy on the tongue tip and press the tongue against the roof of the mouth such that the candy lies behind the front tooth. Then, bite the teeth by keeping your mouth open and swallow in the same position. Repeat this procedure thirty times twice daily in the morning and evening. If these exercises do not help, then dental treatment is suggested. In children, it includes placing a tongue crib or orofacial myology, which comprises swallowing therapy, along with approaching nasal, breathing, and allergic issues present, and speech therapy, if required.

How Can I Identify Whether I Have Tongue Thrust or Not?

- Pushing away the tongue against the teeth while swallowing.
- Mouth breathing.
- Tongue visibility between the teeth.
- Incomplete lip closure.
- Open bite.
- Speech impairments.

Can Tongue Thrusting Habit Stop on Its Own In Infants?

When the baby's mouth is touched, it is a natural reflex for the tongue to thrust in order to help in breastfeeding or bottle feeding. As the child gets older, the reflex goes away on its own with a change in the swallowing habits.

Is Anxiety Associated With Tongue Thrusting?

Tongue thrusting or rubbing occurs as a result of anxiety, which predominantly happens when the person is subjected to emotional stress.

What Is the Normal Position of the Tongue in the Oral Cavity?

In the natural position, the tongue should rest half an inch behind the front teeth, with the whole tongue pressing against the roof of the mouth, lips fully sealed, and the upper and lower teeth placed somewhat apart.

What Is the Time Taken to Correct Tongue Thrust?

Eight to twelve weeks is the time taken to stop tongue thrusting if the baby is undergoing effective therapy.

How Will I Know if My Baby Has Withdrawn Tongue Thrust?

Tongue thrusting is present if the baby denies the spoon and the tongue thrusts ahead. It has gone away or is fading if the child opens the mouth and accepts the spoon.

Is Speech Affected by Tongue Thrust?

Speech impediment is associated with tongue thrusting, and there will be difficulty pronouncing sounds like sh, ch, zh, and j.

When Does Tongue Thrust Go Away?

Until four to six months, tongue thrusting is natural in infants, which is essential for limiting food other than milk from entering the oral cavity to prevent choking.

When Is Tongue Thrust a Problem of Concern?

Tongue thrusting is a problem of concern if the child has passed the infant stage and the child's tongue protrudes while speaking, swallowing, and resting, or has a speech impairment, difficulties in sucking, and misplaced teeth.

I have gap between my front teeth. Please help.

Query: Hi doctor, I was looking into veneers and invisalign to fix the gap between my front teeth. I am not sure what would fix them. So, I am looking for some initial advice. I have attached a picture for you to view. Thank you.  Read Full »

Article Overview: It is of utmost importance that parents routinely examine the intraoral region of their kids for any anomaly of soft tissues or hard tissues like milk tooth, permanent tooth and the jaw. Most of the oral and maxillofacial anomalies seen in children can be corrected by taking appropriate preventive steps in the growing stage itself. Read Article

It is very important to routinely examine the intraoral region of the kids for any anomaly of soft tissues or hard tissues. For this, the parents should have a basic knowledge about the function of the mouth and the intraoral parts and its esthetics. Some of the common features which have to be kept...  Read Article

Article Overview: In this article, we will discuss various treatment options for a gap in upper front teeth, medically known as midline diastema. Read Article

Do you have a question on Tongue Thrusting or Malocclusion?