In this article, I have discussed a case of panic disorder treated with CBT. Cognitive behavior therapy is based on altering your negative thoughts, emotions, and behaviors to positive ones. 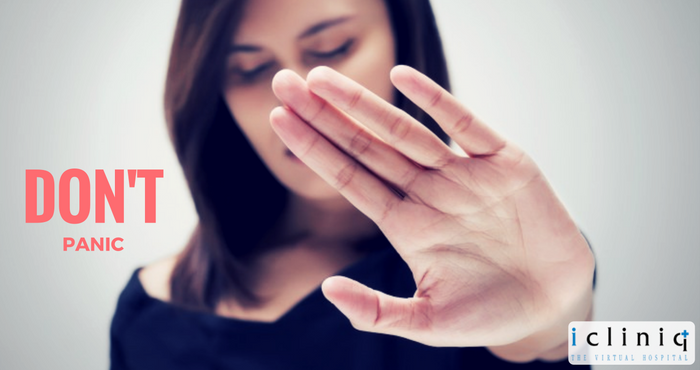 What Is Panic Disorder?

Panic disorder is a condition characterized by extreme anxiety attacks which mimic heart attack symptoms such as rapid heartbeat, palpitation, heavy breathing, sweating, choking, etc. But, this is not due to any medical problem. It is completely a psychological issue and can be treated through psychological treatment. Cognitive behavior therapy (CBT) is found to be the best treatment for panic disorder.

Considering the incidents of terrorism, snatching, robberies, accidents and mishaps, we see many people with anxiety and panic disorder. People often consult the doctor at a very advanced stage in which they cannot even move out of their home. A similar case was handled by me recently.

Related Topics
I have anxiety and panic disorder. Can I drink occasionally?
I had three anxiety attacks last night because of ringing sound in my ears. Please help.
Dr.Chaitra G

A female aged 46 years from a higher socioeconomic class approached a psychology clinic with the presenting problems of panic attacks, extreme anxiety, and social phobia symptoms. She was unable to move even from her room and her fears of getting panic attacks made her bedridden. She feared to travel in a plane because of previous incidents of tragedy during plane travel. Her uncle died of a heart attack during a plane journey. This and other incidents of deaths among her relatives developed the fear of death in her. She was unable to carry out daily functioning and her psychological state was quite disturbed due to physical symptoms of vomiting, trembling, rapid heartbeat, difficulty in breathing, choking, sweating, and thoughts of having a heart attack. Her medical tests declared normal results and she was referred for psychotherapy.

I planned to conduct a case study on this patient since her psychological assessment findings suggested a good prognosis. She signed a consent form to participate in the study and she was assessed through standardized questionnaires which revealed her severe level of panic attacks and severe symptoms of agoraphobic avoidance. According to recent research findings, cognitive behavior therapy was suggested as the best treatment for her. She was an educated lady who had fair insight regarding her condition. Further insight was developed through psychoeducation since she had a belief that she might be suffering from any heart problem due to clear physical symptoms. Her medications were not producing any satisfactory result because her anxiety was increasing day by day.

She was challenged by the results of her medical reports. Further, she learned relaxation training which produced very positive effects in her anxious state. She was also educated about the mind and body connection, which she clearly observed during times of her panic and through the change in the symptoms after relaxation exercise. Moreover, systematic desensitization was taught to her in which she made a list of feared objects and situations ranging from most feared situations to the least fearful situations.

She was mostly scared of traveling by plane, then driving a car and then traveling in a car with her driver. She was scared of going to crowded places, shopping malls or enclosed places where she might experience panic attacks. This hierarchy was used to lessen her fear while imagining these scenarios in a relaxed position. This exercise was demonstrated during the psychotherapy session and then she was given an assignment to gradually face these circumstances in real life.

She started going out with a driver accompanying a family member, then she started going out shopping with her daughter. She gradually started to drive her car and go shopping alone. Finally, she traveled on a plane to attend a wedding ceremony of her relative living abroad. Then, she went on a tour with her husband. At this stage of psychotherapy, she was able to manage many of her home chores, which she had quit due to her panic disorder.

Another technique which fairly helped her was the de-catastrophizing continuum. Through this strategy, she started observing her misinterpretations regarding her minor bodily symptoms such as heavy breathing, which she assumed to be a heart attack symptom. She had a clear understanding that her thoughts were producing these feelings and sensations in her body. When she understood this, she started controlling her thoughts and feelings.

After checking her post-therapy evaluations, she was bilaterally terminated because her panic and agoraphobic avoidance lied at zero level.

Similarly, those who observe any depressive symptoms or find any kind of psychological disturbance are recommended to get a consultation as soon as they observe the signs. The earlier they get tested by a psychologist, sooner they can be cured of their psychological problem.

For further information about CBT and panic disorder, consult a psychiatrist online --> https://www.icliniq.com/ask-a-doctor-online/psychiatrist

Query: Hello doctor, I am 18 years old. Today I finally got the courage to talk to my doctor about the stress obsessive thoughts, and the physical harm it does to me. I got an appointment with a psychologist. She diagnosed me with anxiety, panic disorder, and being severe hyperemotional. The doctor did n...  Read Full »

Why do I have anxiety attacks soon after I wake up?

Query: Hello doctor, I am 24 years old, and I weigh 80 kg. My height is 5 feet 7 inches. I have anxiety and depression from many days. Anxiety starts as soon as I wake up and it lasts for a few minutes. I calm down for a while and then again it starts. It occurs every day like a cycle without any reason. ...  Read Full »

Do you have a question on Psychotherapy or Panic Disorder?