Psychotic disorder can be challenging and confusing. It takes great pain and effort for the family members to have a person with psychotic disorders. Read the article to know more about the different types of disorders and the ways in which they can be treated. 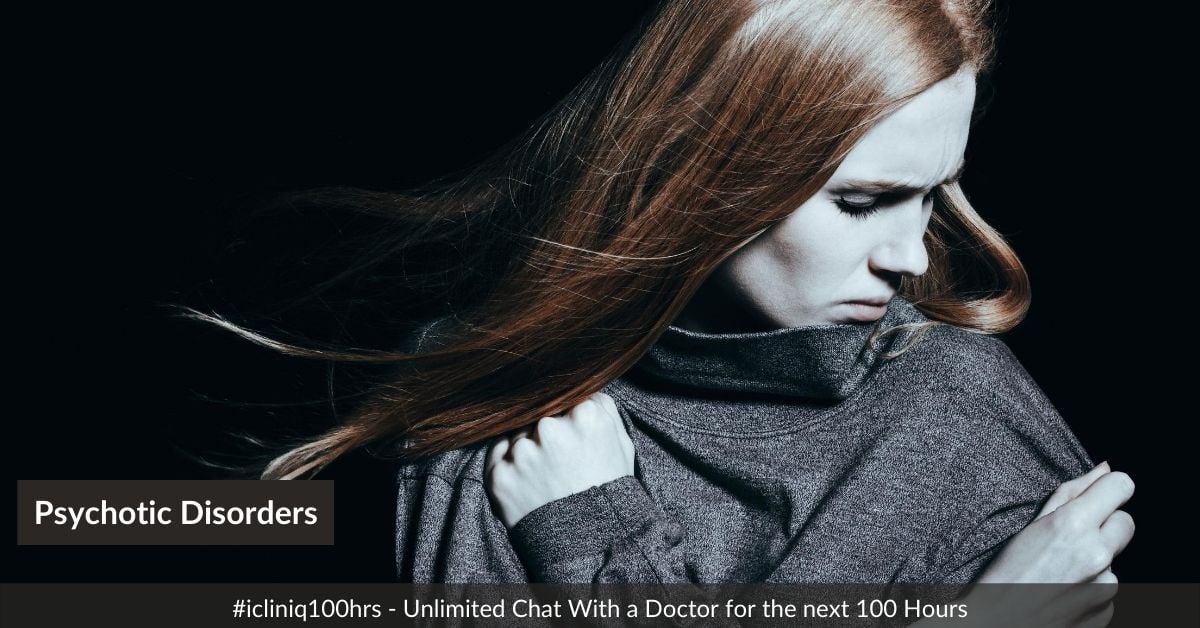 What Is a Psychotic Disorder?

Psychosis is not a disease in itself, but a symptom that accompanies various mental health conditions. The primary symptoms of psychosis include hallucinations (perceiving stimuli that do not exist), confabulation (filling gaps in memory by making false memories), and delusions (strong yet false beliefs about oneself or one's life). Based on the differences in duration, cause, and associated conditions, psychotic disorders can be classified into many types.

What Is a Hallucination?

Hallucinations involve the false realization of different senses which do not exist. It might involve hearing, smelling, feeling, seeing, or even tasting things that do not exist for real. The most common one is auditory hallucinations. The person starts hearing voices or weird sounds that have no source. Delirium and dementia are common visual hallucinations. The cause of getting hallucinations is being drunk or being high. Also, drugs like marijuana and cocaine may also be a reason.

A confabulation talk means it is a false speech given by the person. Confabulation is often distinguished from lying. A person who confabulates does not have the intention of cheating or manipulating. The person has no idea to deceive and also the person is totally unaware that the information is not true. Confabulation can also seem to be consistent, and apparently normal for the person. There are two types of confabulation:

A delusion may be a firm or fixed belief. These beliefs cannot be changed with rational thoughts and arguments. These thoughts will not be aligned to a rational argument about cultural, regional, and educational background.

What Are the Types of Psychotic Disorders?

Schizophrenia: It is a mental health condition where symptoms of psychosis persist for more extended periods of time, that is, six months or longer. Even day-to-day routine may be affected. The cause may be due to genetic or environmental causes. There are many types of schizophrenia. The most common one among them is paranoid schizophrenia. Other types are:

Bipolar Disorder: This condition is characterized by mood disturbances where the patient has alternating phases of elevated mood (mania) and low mood (depression). It is often misdiagnosed as a borderline personality disorder. It requires experts to find out the difference. After it is identified, the treatment can be planned accordingly. The exact cause of this disorder is not known. It might be due to many factors such as environment, genetics, and chemical alterations in the brain. There are four types of bipolar disorder. They are bipolar I, bipolar II, cyclothymic, and bipolar disorder due to any substances.

Schizoaffective Disorder: The person has mood disorders such as bipolar disorder or depression along with symptoms of schizophrenia. In this disorder, the psychotic symptoms may or may not be present especially at the time when a patient is experiencing depression and mania. It is a chronic medical health condition and it affects one in two hundred people at any point in time in their lives.

Brief Psychotic Disorder: It is a type of psychotic disorder where symptoms of psychosis are severe, but last for a comparably short period, frequently following a major life stressor such as being a victim of a crime or death of a close family member. It is commonly seen in teens and young adults. It is more common in males than in females.

Drug-induced Psychosis: It is also called toxic psychosis or substance abuse psychosis. In some instances, symptoms of psychosis can be seen in some due to the use of or withdrawal from substances of abuse. The substances which are commonly abused are alcohol, opioids, cocaine, and other addictive substances.Antipsychotics such as Haloperidol or Chlorpromazine might be advised to reduce acute psychotic symptoms. Magic mushroom is another commonly used hallucinogen.

Organic Psychosis: Organic psychosis is due to abnormal brain functions. This is a type where symptoms are related to physical trauma such as following a head injury. It can be associated with metabolic disorders. Stroke and infections in the brain can lead to organic psychosis.

Mental health conditions are more common than we believe. People often hesitate to consult a mental health specialist due to the social stigma attached to it. But, with proper guidance, care, and follow-up, mental disorders can also be successfully treated, thus improving the quality of life of the individual as well as those around them. The primary mode of treatment for a psychotic disorder is with psychotherapy, cognitive-behavioral therapy (CBT) and medications.

This will be conducted by a psychologist under the supervision of a psychiatrist. There will be a one on one session in which the individual will be asked to talk openly about their problems. This individual talk therapy will be a distress relieving session.

Also, a thorough understanding of the disease by the family and friends is a vital step in treatment as only then, it is possible to provide the necessary support, which is of utmost importance in recovery. So, psychotic disorders must be treated without being shied away from. The sooner the treatment is initiated, the better is the outcome we can expect. In severe cases, the patient will be asked to get admitted to the hospital for treatment.

Having a mental disorder is no more a taboo. With the increasing awareness in this modern era, do no fear of being judged. Call a doctor online for further information and help.

What are some Frequently Asked Questions of an website?

A psychotic break is when the psychotic symptoms first appear or when the symptoms reappear after a period of remission when the person loses contact with reality experiencing false beliefs or hallucinations (feeling things that are not present).

Can One Be Aware of Their Own Psychosis?

Psychosis is not a disease, but it is a symptom. One can experience some unusual signs before the episode begins. Signs include depression, unusual behavior, and thoughts.

Typically people with psychotic disorders lose contact with reality and see or hear things that other people cannot see or hear, and they also believe things that are not actually true.

Typically people with psychotic disorders lose contact with reality and see or hear things that other people cannot see or hear, and they also believe things that are not actually true.

What Should You Not Say To a Person Suffering From Psychosis?

- Avoid blaming the person for psychosis or their actions related to psychosis.
- Avoid arguing with them about their condition and reality.

What Are the Triggering Factors For Psychosis?

Psychosis is a symptom that can be set off by physical injuries, substance abuse, extreme stress, or trauma.

Can Psychosis Be Cured And Can One Get Back to Normal After Psychosis?

There is no permanent cure for psychosis, but there are multiple treatment options to improve the condition and ease the symptoms. Some patients get back to normal with proper and timely treatment, whereas others continue to have symptoms even after treatment.

How to Calm a Psychotic Episode?

- Treat the person with respect.
- Listen patiently to the way the person explains.
- Do not argue.
- Be empathetic.
- Understand the situation that the person is experiencing or undergoing.

What Happens In the Brain During Psychosis And Can It Result In Brain Damage?

Psychosis can affect the way the brain processes information. Psychosis causes you to lose contact with reality. If psychosis is left untreated, it can lead to brain damage.Right and timely psychiatric treatment not only helps in proper functioning but it improves long-term prognosis.

What Will Happen If Psychosis Is Left Untreated and Can One Lead a Normal Life with Psychosis?

Psychosis, when left untreated, can cause brain damage, eventually leading to death. Right and timely treatment can help people with psychosis lead a normal and fulfilled life.

What Is Permanent Psychosis?

Psychosis may not be a permanent condition. But if it is left untreated, there can be complications increasing the risk of premature death and suicide.

What Is Meant By Psychotic Stare?

A psychotic stare is a prolonged and fixed gaze at someone making it uncomfortable. A blank stare can accompany certain psychological disorders.

What Are the Early Warning Signs of Psychosis?

A few of the early warning signs of psychosis are:
- Changes in thinking.
- Worrisome changes in the behavior.
- Drop in the grades or overall work performance.
- Trying to spend a lot of time being alone.
- Hallucinations.
- Delusions (false beliefs).

How to reduce the psychosis caused due to sexual abuse for years?

Query: Hello doctor, I am an 18 year old, and I have been sexually abused as a child for many years. I have never told anyone, and now my parents got divorced. I am experiencing numbness and psychosis symptoms, but they do not affect my daily life, and no one knows what I am going through. I wanted to know...  Read Full »

I am diagnosed of psychosis NOS. Is there a possibility of withdrawal psychosis when antipsychotics are discontinued?

Query: Hi, I am diagnosed of Psychosis (NOS). The first episode was in 2010 and it lasted for three-four months before I was taken to a psychiatrist. I had been thinking that people are tracking me through email, internet. My mobile phone is tapped and all that. I did not get any auditory or visual halluci...  Read Full »

I am hearing sound and voices. Is it auditory hallucinations?

Query: Hello doctor,I am 23 years old. I have been hearing sound and voices for a couple of weeks. I think I am having auditory hallucinations. Experienced this before when I committed suicide eight years back. Then it stopped until now I am hearing them again. No medication.  Read Full »

Do you have a question on Psychotic Disorder or Schizophrenia?