Tackle Your Depression With Exercise 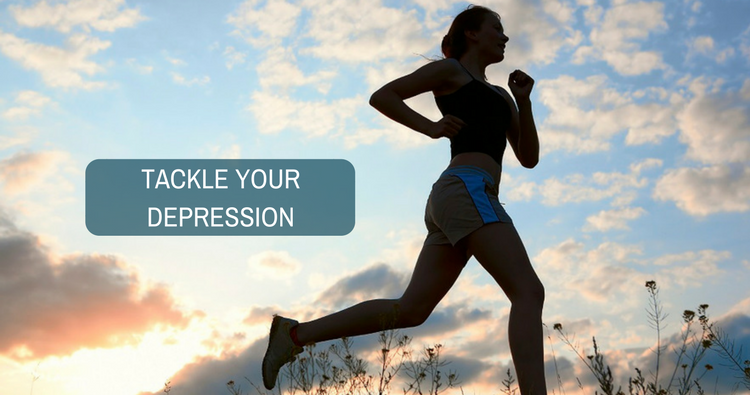 Depression is one of the most common medical issues worldwide that is stretching it's arms vigorously.

Standard treatments, generally medicines have not been effective in preventing further occurrence of this condition. Selective Serotonin Reuptake Inhibitors (SSRIs) can take months to provide a significant beneficial outcome. Other than this, side effects of these antidepressant drugs are a further concern, based on individual patient's physical and mental health status. Additionally, in order to achieve complete disappearance (remission), the one third of patients require combination of two or more different drugs. Despite that about one in three depressed individuals do not improve with available medicines.

A number of research studies have shown that regular exercise could be of high potential in the management of depression or symptoms of depression. Additionally, exercise has been linked with remarkable positive, and very few negative effects, if any on other disorders. From neurological point of view, engagement into exercise have shown that it is linked with improvement of hippocampal volume, increase blood supply to pre-frontal cortex, and accentuation of brain mediators such as brain-derived neurotrophic factor (BDNF).

On the other side, study of depressed individual's brain demonstrated that hippocampus and pre-frontal areas of the brain are one of the most severely affected areas in depressed patients. It has been hypothesized that if exercise and depression have opposite effects on brain areas that play a significant role in causation of depression, then exercise must counter the symptoms of depression by increasing the volume and most importantly functioning of involved brain areas.

Having said this the question arises, which kind of exercise are associated with better outcome in depression -- resistance or aerobic?. However, research indicated that in regard to treatment of depression and it's core symptoms, little difference exists between different kind of exercises, making the advice very easy for doctors and health care providers and the limitless engagement on part of the patients.

In addition to this, research also pointed out that depression is one of the well recognized and preventable risk factor for some of the very serious chronic conditions such as cardio-vascular disease and diabetes, and similar in potency with traditional risk factors such as age, smoking, hypercholesterolemia to mention a few. For example it has been shown that occurrence of depression doubles the risk of developing diabetes in lifetime. So prescription of exercise as a medical treatment will result not only in the improvement of depression, but also in preventing the occurrence of other very serious and devastating diseases like diabetes.

Importantly, data from several research centres have indicated that exercise to be just as effective as antidepressant medications in the management of depressive disorders. Furthermore, engaging in regular physical exercise can abolish the medication dependence and help you to reduce the dose of prescribed medications. More importantly, few research studies have established that exercise is more effective than medication in preventing recurrence of the depression. It is now established beyond the doubt that exercise imparts other benefits mentioned above like reduction of moodiness, improvement of positive attitude and outlook and improved mental well-being.

While the beneficial effects of exercise as a treatment modality of depression are proved beyond doubt, it may also have some hurdles to execute, for example daunting, cost, or physical limitation of individuals. Therefore it is very essential to develop strategies for successful compliance by the patient, setting reasonable and realistic goals and preparing them for setbacks or barriers.

Whether exercise regimen is used as a first-line treatment of depression or as an additional strategy to medication or psychotherapy, patients have virtually nothing to lose and lot to gain from adopting an exercise approach in tackling the symptoms of depression.

Article Overview: Obsessive Compulsive personality disorder is a chronic, disabling and difficult to treat mental disorder that remains unrecognized in majority of patients due to lack of awareness.  Read Article

Before you understand what is OCPD I am writing down a summary of a patient suffering from OCPD. "A 26-year-old woman has a lifetime preoccupation with rules, work, order, and stinginess. Even so, she is in trouble at work because she keeps missing deadlines and has difficulty making decisions. The...  Read Article

How does diet help in mental health conditions?

Query: Hi doctor, How does diet help in mental health conditions such as depression and anxiety? I would like to discuss the success of incorporating diet in mental health treatment.  Read Full »

Do you have a question on Mental Health or Depression?