Myasthenia gravis is an autoimmune neuromuscular junctional disease that results in muscular weakness. Learn about its symptoms, diagnosis, and treatment 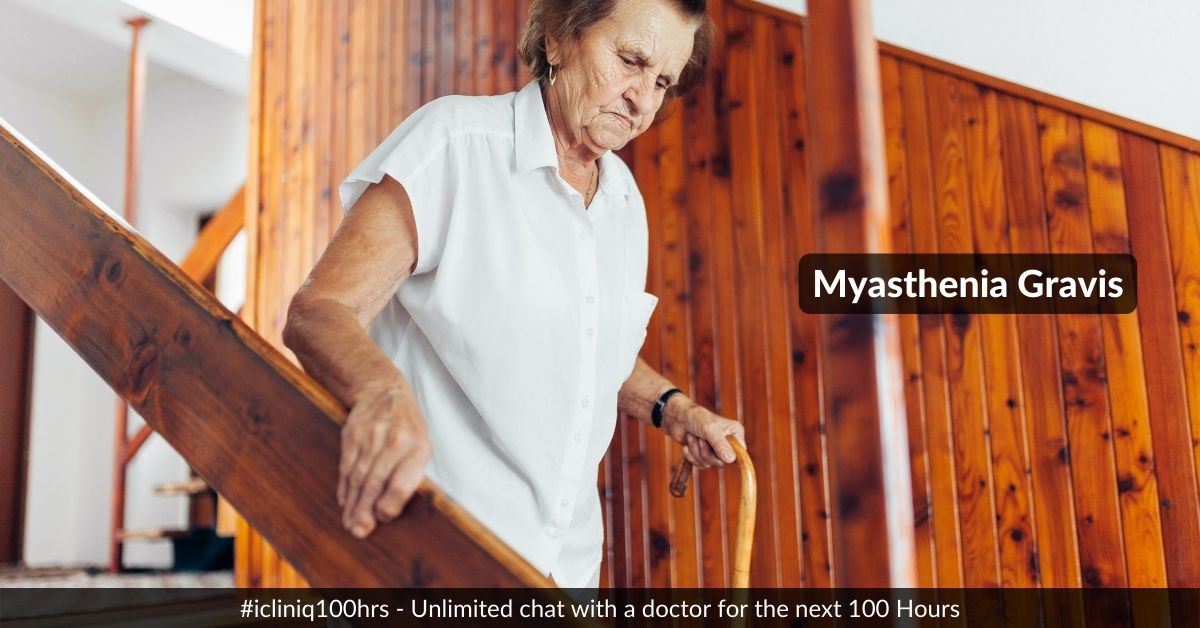 What Is Myasthenia Gravis?

Myasthenia gravis (MG) is a Latin word meaning “grave (serious) muscle weakness.” It is an autoimmune neuromuscular junctional disease, caused by an antibody-mediated blockade of neuromuscular transmission resulting in skeletal muscle weakness. The first muscles to be affected are the ones around the eyes, which makes the eyelids droop and double vision. All functions performed by voluntary muscles like chewing, swallowing, speaking, and breathing and shoulder and hip girdle muscles can get affected. It results when the communication between nerve cells and muscles is affected. MG is the most common disorder caused by neuromuscular transmission.

How Does Myasthenia Gravis Affect the Body?

What Are the Symptoms of Myasthenia Gravis?

Muscle weakness gets worse with activity, and it gets better with rest. The symptoms include:

In most patients, the muscles in the eyes, face, and throat are affected first, but in some patients, it may affect shoulder and hip muscles also. All symptoms become worse during periods of activity.

MG is caused by an autoimmune problem, which results in a neuromuscular junction disorder. An autoimmune reaction occurs when the immune system mistakenly attacks healthy cells in the body. Here, instead of the antibodies attacking the harmful substances in the body, it attacks the acetylcholine receptors, which are located at the neuromuscular junction. Nerves communicate with muscles by releasing chemicals (neurotransmitters) that fit precisely into receptor sites on the muscle cells at the nerve-muscular junction. The effect of neurotransmitter substance acetylcholine reduces when the immune system damages the neuromuscular membrane, which results in muscle weakness. Acetylcholine is crucial for communication between nerve cells and muscles.

The exact cause is still not known. Some studies show that virus or bacteria induces molecularmimicry with acetylcholine receptor (AChR) and provokes immunity to attack AChR. It commonly affects people over 40 years of age.

Some believe that the thymus gland triggers the production of antibodies that block the chemical acetylcholine transmission through AChR.

What Are the Risk Factors for Myasthenia Gravis?

Some factors that worsen the condition are:

How Is Myasthenia Gravis Diagnosed?

On your visit, your doctor will perform a physical examination and take a complete medical history. Then the doctor will perform neurological exams like checking your eye movements, assess your speech and swallowing, checking your strength of different muscle groups, muscle tone, reflexes, muscle twisting, and thinning of muscles. And also, he or she will examine the sensations balance of body like touch, pain, and coordination to rule out any other possibilities.

After these initial examinations, your doctor might suggest you do the following tests:

How Is Myasthenia Gravis Treated?

There is no cure for myasthenia gravis, but the symptoms can often be controlled with medications. Myasthenia gravis is a lifelong medical condition. Early detection is the key to managing the condition. Treatment may include:

Intravenous therapy - To treat sudden worsening of symptoms, the following therapies are used:

If there is a tumour in the thymus, the gland has to be removed. The surgical removal of the thymus gland is called thymectomy. The types of thymectomy are:

What Are the Complications of Myasthenia Gravis?

Other Condition May Be Associated with MG:

Some patients develop mild symptoms, while others ability to walk and perform other activities is affected so much that they become confined to a wheelchair. To relieve symptoms and lead an almost normal life, consult a doctor now.

What does myasthenia gravis affect?

Myasthenia gravis stimulates the immune system to produce antibodies that attack and destroy the communication between nerves and muscles. This results in muscle weakness

Which neurotransmitter is deficient in myasthenia gravis?

The antibodies produced in myasthenia gravis destroys the acetylcholine receptor present in the neuromuscular junction. This blocks the communication between nerves and muscles, resulting in muscle weakness.

Is there any cure for myasthenia gravis?

No, there is no cure for this condition as of now. Treatment only gives symptomatic relief. Medicines like corticosteroids, immunosuppressants, and cholinesterase inhibitors are given. If there is a tumor in the thymus gland, it is surgically removed.

How do you get myasthenia gravis?

It is an autoimmune disorder, where the antibodies attack and destroy the acetylcholine receptors, which blocks the communication between nerves and muscles causing muscle weakness. Some believe that the protein present in viruses or bacteria can induce this autoimmune response, while some say that the thymus gland triggers the production of these antibodies.

If this disease affects the muscles that control breathing, it results in a condition called myasthenia crisis, which can be life-threatening.

What is the best treatment for myasthenia gravis?

Drugs called pyridostigmine that increases the production of acetylcholine, which in turn stimulate the receptors and transmit signals between the muscles and nerves are effective.

Can myasthenia gravis go away?

For some patients, muscle weakness goes away completely without treatment during the remission period.

How long can you live with myasthenia gravis?

The life expectancy is normal for most people who have myasthenia gravis. People with mild symptoms lead a healthy life even without any treatment. In moderate to severe cases, with the right treatment, the person can work and live normally. This disease can be fatal only when it results in myasthenia crisis.

What foods should I avoid with myasthenia gravis?

Avoid eating food that requires a lot of chewing like red meat, bread, and dry and crumbly food. Preferably eat soft food distributed into small meals during the day. Avoid eating thin liquid, as it can accidentally go into your lungs.

Does myasthenia gravis get worse with age?

The symptoms do get worse with age, as the muscle weakness becomes more with use and improves with rest.

My eyelids seem to droop when I am relaxed. Could it be ptosis?

Query: Hi doctor, From the past 12 months, my eyelids seem to droop when in a normal or relaxed state. It takes an effort to perform any kind of activity. I am doing eye exercises, but their effects are temporary. My eyelids close even more often after I use mobile or laptop. Could it be ptosis? If yes, ...  Read Full »

Article Overview: If a person taking wheat, barley and rye in diet and develops extensively itching symmetrical lesions over extensor aspect of the body, then we must think of this disease. Here, I have discussed the causes, presentation and treatment of dermatitis herpetiformis. Read Article

Dermatitis herpetiformis (DH) is characterized by an intensely itchy, chronic, papulovesicular eruption that is usually distributed symmetrically on the extensor surfaces. The prevalence varies from 10 to 39 per 100,000 persons. Although more common in the second, third or fourth decades, DH may sta...  Read Article