If a person taking wheat, barley and rye in diet and develops extensively itching symmetrical lesions over extensor aspect of the body, then we must think of this disease. Here, I have discussed the causes, presentation and treatment of dermatitis herpetiformis. 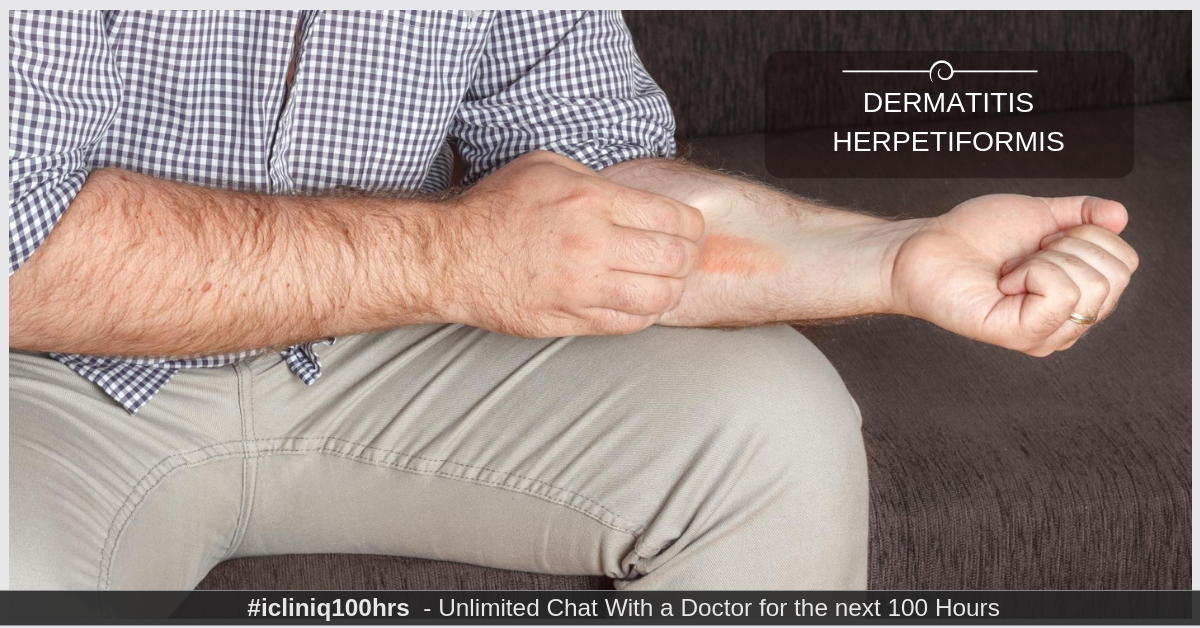 Dermatitis herpetiformis (DH) is characterized by an intensely itchy, chronic, papulovesicular eruption that is usually distributed symmetrically on the extensor surfaces. The prevalence varies from 10 to 39 per 100,000 persons. Although more common in the second, third or fourth decades, DH may start at any age. After its presentation, DH persists indefinitely in varying severity.

Gluten is a protein found in wheat, barley and rye, which plays a critical role in the pathogenesis of DH. IgA antibodies formed against this protein in the predisposed individuals are thought to cross-react with certain antigens of the dermal-epidermal junction leading to clinical expression of the disease. It is probable that most patients with DH have some degree of gastrointestinal abnormality similar to that seen in celiac disease.

The primary lesion of dermatitis herpetiformis is either an erythematous papule such as an urticaria-like plaque or most commonly a vesicle. Large bulla is infrequent. The lesions are usually extremely itchy and located symmetrically on the elbows, knees, shoulders, lower back and buttocks. The face and facial hairline may be involved.

Diabetes Mellitus and Oral Health
My TTG IgA is high. Do I have celiac disease?
Why am I having severe itching beneath the belly and between thighs?

There is an increased frequency of gastrointestinal lymphomas and non-Hodgkin’s lymphoma in DH patients.

These patients also have a high incidence of autoimmune diseases such as,

It is the drug of choice for DH in the usual dose of 100 to 150 mg per day. Occasionally, patients will require double this dose. There is a prompt relief of symptoms and no new lesions erupt after one to two days of therapy. However, the patients have to be maintained on a minimal dose of Dapsone (sometimes as little as 25 mg on alternate days), because the disease activity increases sharply on cessation of treatment.

It is useful for patients who cannot tolerate Dapsone in a dose of 1 g to 1.5 g per day.

Thus, do not take itching lightly, as it is a very common symptom of most of the skin diseases.

I have severe itching in the groin area. What should I do?

Query: Hello doctor, I have itchy boils on the scrotum and groin areas. During the day, I feel too itchy, and due to the itching, I have developed rashes which are painful. When I try to break them, it starts to bleed. Sometimes, I have the itchiness during the night as well. I have attached an image for y...  Read Full »

Query: Hi doctor, I have done a blood test before 3 months and was diagnosed with celiac disease. I already have thyroid problem which is controlled right now with Thyroxine. The issue is followed by a gluten free diet, I cannot see any progress. I am still losing weight. My skin is pale and dry. I also ha...  Read Full »

Article Overview: Diabetes is one of the leading cause for permanent blindness. It is very essential for us to know to avoid the complications of diabetes. Micro-vascular complications will involve eyes, kidneys and nerves in common. But early detection and prevention will avoid permanent disability. Read Article

"EYES are the most beautiful organs created by nature which enables us to have vision. It is very important factor for individuals to be independent in their life" Diabetes is a metabolic syndrome entity which is characterized by hyperglycemia, high blood pressure and dyslipedemia. It causes variou...  Read Article