Placenta previa, otherwise called a low-lying placenta, is when the placenta covers a part or the entire cervix during the third trimester of pregnancy. Read about its types, symptoms, causes, complications, and precautions to be taken. 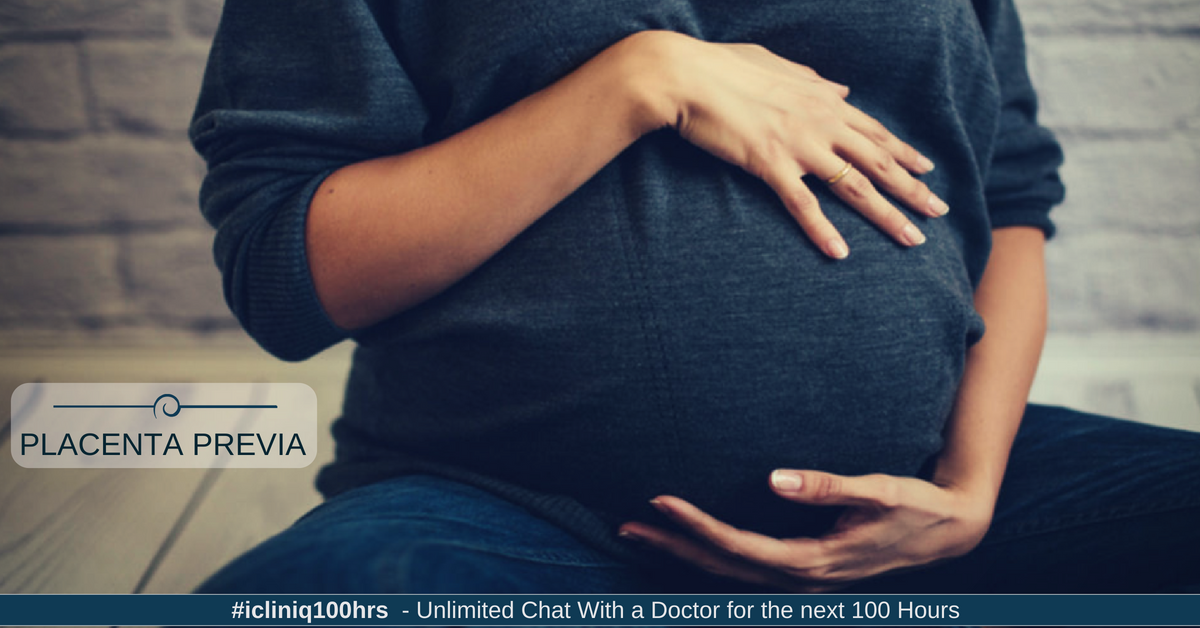 What Is Placenta Previa?

The placenta is usually located low in the uterus during early pregnancy. But as the pregnancy progresses and by the third trimester, the placenta should be ideally near the top of the uterus. This allows the baby to be delivered through the cervix without anything blocking the path.

If there is placenta previa, it means the placenta is lying lower in the uterus, probably blocking the passage of the baby's arrival (cervix). This abnormal position of the placenta can result in severe bleeding throughout the pregnancy and delivery. Women with this condition must avoid strenuous activities, such as sex, douching, using tampons, running, and jumping. If the condition does not resolve, the baby might have to be delivered through a C-section.

What Are the Types of Placenta Previa?

A placenta previa can either cover the cervix partially or totally. So, depending on that, we have two types:

What Are the Signs and Symptoms of Placenta Previa?

Bright red, painless vaginal bleeding in the second or third trimester is a sign to suspect placenta previa. The other symptoms include sharp cramps, abdominal pain, and bleeding after sex. In a majority of women detected with placenta previa during early pregnancy, the placenta migrates upwards (due to the growth of the uterus), and the condition resolves independently. The doctor may order a scan to recheck the location after a few weeks.

But, in those whom it is still detected at later stages or still persists in the third trimester, it is less likely to migrate upwards any longer. Then, the delivery will be required to be done via a cesarean section.

Whereas, in minor (partial) cases, vaginal delivery may be attempted if deemed suitable by the attending doctor. Irrespective of a major or minor one, some precautions are called for during this pregnancy.

Related Topics
Ectopic Pregnancy
Placenta Previa and Low-Lying Placenta
My wife is bleeding due to low-lying placenta. Is this placenta previa?

When to Call the Doctor?

If you have painless, bright red bleeding or spotting during the course of your pregnancy, it is critical to be at the hospital at the earliest. In case of severe bleeding, it can be life-threatening, and you may require blood transfusions. Also, consult the doctor for any other specific restrictions that may be applicable to you.

The possible causes include:

The following factors increase the risk of having placenta previa:

How Does a Doctor Diagnose Placenta Previa?

This condition is usually diagnosed during a routine ultrasound at 20 weeks. But it is nothing to worry about, as the placenta, in the majority of cases, is positioned lower during early pregnancy. As the weeks go by, the placenta generally corrects itself. Only around 10 % of cases will lead to major placenta previa (according to the Royal College of Obstetricians and Gynecologists).

If you notice painless bleeding during the second half of your pregnancy, consult a doctor, who will detect the position of the placenta using the following methods:

How is placenta previa treated?

Depending on how much bleeding is occurring, the baby’s health, the position of the baby and placenta, and how far along you are, the doctor will form a treatment plan. The doctor usually monitors the amount of bleeding before treating the condition.

No to Minimal Vaginal Bleeding:

If you still bleed, then consult your doctor as soon as possible.

If you have severe vaginal bleeding, then the doctor will schedule a C-section as early as possible. It is usually done after 36 weeks. In case the C-section has to be done earlier, then the doctor injects corticosteroid injections to help the baby’s lungs mature fast.

An emergency cesarean delivery is done.

What Are the Complications of Placenta Previa?

To know more about the possible complications and treatment options of placenta previa, consult an obstetrician and gynecologist online.

What Happens When You Have Placenta Previa?

In placenta previa, the placenta of the fetus hides the cervix portion of the mother. The cervix being the outlet of the delivery, there might be some complications. Severe bleeding and pain might be seen during the delivery of the baby.

How Is Placenta Previa Diagnosed?

Most of this condition is diagnosed during a regular pregnancy check-up. This happens in the second trimester of pregnancy. The technique used to detect this condition is ultrasound imaging. Placenta previa is also identified in cases of vaginal bleeding.

Placenta previa is a condition where the cervix of the mother gets blocked by the baby’s placenta. This might be harmful to the baby during delivery. So it is advised that the mother should take rest during such conditions. This will make them feel more comfortable and relaxed, so they become mentally and physically ready.

What Triggers Bleeding in Placenta Previa?

How Can I Improve My Placenta Previa?

The common symptom of placenta previa is vaginal bleeding. This might not be accompanied by pain most of the time. But in some patients, due to the contractions in the uterus, abdominal pain might be present. If it is the first delivery of the mother, then placenta previa can cause a certain degree of anxiousness.

Can You Have a Healthy Baby With Placenta Previa?

Having delivered a baby by placenta previa does not necessarily mean your baby will be sick. But some babies are known to be born by premature birth, low weight, breathing problems, and cerebral palsy. You should consult your doctor regarding the health of the mother and the baby.

How Can You Prevent Placenta Previa Naturally?

How Early Do You Deliver With Placenta Previa?

Almost all the cases of placenta previa is a C-section delivery. Since it is pre-planned, the surgery is scheduled somewhere around 37 weeks to 38 weeks. The surgery date might vary depending on the intensity of the vaginal bleeding.

How Can I Stop My Placenta Previa From Bleeding?

If you are having placenta previa, bleeding can be controlled by making a few lifestyle changes. This can prevent the condition from becoming worse.
- Do not climb the stairs up and down.
- Do not sit on the sofa and bed. Always prefer sitting on the floor. Sitting in a butterfly position can improve the health of pregnant women and babies.
If there is continuous bleeding, even after making these changes, you should report to the doctor immediately.

Intermenstrual Bleeding or Spotting - Is it Normal or Should I be Worried?

Is travelling with placenta previa safe during the 28th week of pregnancy?

Query: Hi doctor, I am 28+2 weeks pregnant and have low lying placenta which is 1.6 cm from the internal os. I want to travel by train for a six hour journey. Will the train journey affect my baby and me? What should I do? What precautions should I take in this? Can blood clot happen in journey? Please adv...  Read Full »

What are the precautions to take in case of placenta previa?

Query: Hello doctor, My wife is 15 weeks and five days pregnant. Recently, she had an episode of a moderate amount of bleeding per vaginam. We immediately shifted her to the hospital where she was given some conservative treatment, and a USG was done. It was found that the inferior margin of the placenta w...  Read Full »

Do you have a question on Placenta Previa or Pregnancy Complications?