iCliniq / Answers / Maxillofacial Prosthodontist / Keratitis / I have an ulcer behind the wisdom tooth. Please help.

Q. What is that white spot present between my upper and lower wisdom teeth?

Answered by
Dr. Tinu Thampy
and medically reviewed by iCliniq medical review team.
This is a premium question & answer published on Nov 27, 2017 and last reviewed on: Jul 02, 2019 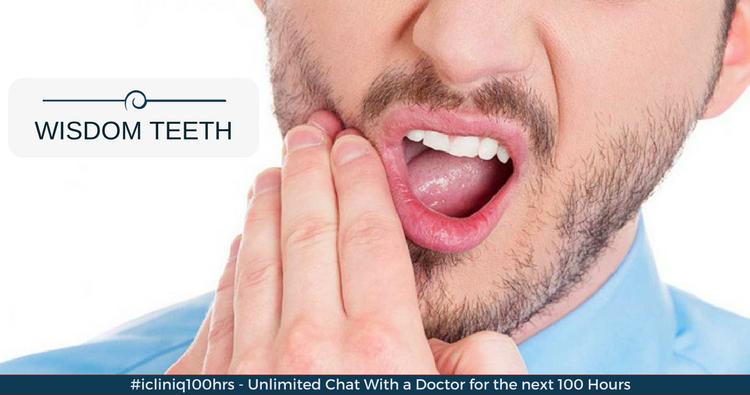 From the last three months, I have a constant pain on the right side of my mouth. I believe the pain was similar to when someone has an erupting wisdom tooth, but I am not 100 % sure. When I looked in the mirror with a flashlight, I found a tiny white spot in the area between my right upper and lower wisdom teeth. I had this spot for at least 4 or 5 days, and then gradually it subsided within a week or so. After a week, when I took a look, that white spot was gone but the little surrounding area had become white. This white area got bigger with time. I visited a dental surgeon in a top hospital, who visually examined the area and asked me to get an OPG done. The OPG report suggested impacted wisdom tooth. The doctor said the white area was caused by trauma from the friction of the two wisdom teeth on that side with the skin.

I was not very convinced and visited another dental surgeon, who also said more or less the same thing, after examining and going through the OPG. As per his advice, I got both wisdom teeth extracted. The white area has remained till this date, not the initial white dot which had disappeared within 5 to 6 days as mentioned above. I could not open my mouth properly for few days after the extraction, but when I finally did, everything appeared normal. Since then, I have not had any oral or dental issues. It is to be noted that neither doctor had seen the first tiny white dot or spot since I had met them after it was gone and when the surrounding area was white.

I have attached some photos here, and the photos marked 1 and 2 show the first white dot. While the remaining show the condition after this spot disappeared. I request your thoughts and opinion about the issue detailed above. Could the original white spot be an ulcer or canker sore? If yes, what could have been the possible cause? Is a single canker sore cause of worry? Can it indicate some very serious underlying condition? I have read on the internet that mouth ulcers normally occur on the inside of cheeks, tongue, and lips. Can it occur in the area where the spot appeared? If it had been a mouth ulcer, is it possible that the ulcer affected the area in a way which caused a trauma resulting in the white area? I request a detailed response to the above at the earliest, please.

Thank you for your query. I have seen all the attached photos (attachment removed to protect patient identity).

|
Related Questions:
Why is there pain at the site of wisdom tooth extraction?
I have pain on the left side of the jaw. Is it due to an impacted tooth or a tooth with large filling?
Baby tooth was removed to expose impacted tooth. Is there a chance for cyst if we delay braces?

Does oral or genital herpes show symptoms like bloody blisters in mouth?

Query: Hello doctor, I have been getting sores and things that look like blood blisters in my mouth for around six months. I had a swab test and blood work was done to rule out HSV. It came back negative. However, there is still a chance it could be HSV as it takes three to six months to show up in your b...  Read Full »

Is it better to get my two impacted wisdom teeth removed?

Query: Hi doctor, I visited a dentist and he completed deep cleaning of all four quadrants. I got composite fillings on one side of the mouth for five cavities (right side). However, I still have four cavities on the left side. I have two options. Wait for three more months and take care of it, as my in...  Read Full »

Is it necessary to get wisdom teeth removed?

Query: Hello doctor, I have wisdom tooth. Is it necessary to remove it?  Read Full »

Vitamin D and COVID-19
Did you know COVID-19 patients with vitamin D deficiency are twice as likely to have severe complications, including dea...  Read more»The New 'Super-Spreader' Strain of Coronavirus
A new variant of SARS-CoV-2, the virus that causes COVID-19, is spreading fast in parts of the UK. Read how this new var...  Read more»How to treat my mother's sigmoid colon ulcer?
Hi doctor, My mother, who is 45 years old, has ulcers in the sigmoid colon for the last 15 years. The problem got reduce...  Read more»