Alcoholism and Its Rising Menace

Contents
Alcohol and Its Impact on Society:
What Does the Research Say About Alcohol Abuse?
What Are the Ill Effects of Alcohol?
What Is Alcoholism?
How Is Alcoholism Staged?
When Do Individuals Take Up Alcohol Addiction?
How to Identify Addiction and Get Help?
How Can Addiction Be Treated? 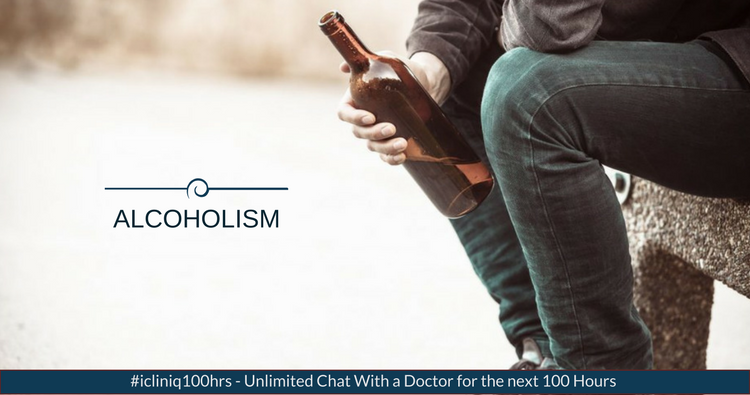 Alcohol and Its Impact on Society:

There is a growing threat to the well-being of the society, which is slowly and steadily tightening its grip over every stratum of the society, threatening its very existence and fabric. This hazard is none other than the one posed by drug addiction and abuse, particularly alcohol.

What Does the Research Say About Alcohol Abuse?

Drug addiction is increasingly emerging as a menace in today's society. Among substances of abuse, alcohol is ranked second, next only to tobacco consumption. According to recent studies, the prevalence of alcohol users is about 21.4 %, with the age of initiation dropping to 17 years, which was previously around 28 years. There is also an increase in the quantity of total alcohol consumption. This trend leads to an increased incidence of physical and psychological illnesses. So, it is the need of the hour to create awareness regarding this social evil.

What Are the Ill Effects of Alcohol?

Alcohol, when consumed within limits (30 ml/day), leads to a sense of well-being and relaxation. But, when consumed in large amounts (more than 90 ml/day), it can slow reflexes, poor judgment ability, decreased control over motor movements and increased anger and violence, which can prove lethal.

Alcohol abuse can lead to many physical morbidities such as hypertension, diabetes, liver cirrhosis, cancer, neuropathy, cardiac illness, and kidney ailments. Physical diseases can also lead to mental or psychiatric conditions such as anxiety, insomnia, depression, and personality disorders. In many studies, it has been found that around 50 % of alcohol users suffer from one mental illness or the other.

How Is Alcoholism Staged?

The following are the sequence of stages seen in alcohol use disorder:

When people take up drinking for social reasons or as a means to get rid of their stress, they develop an alcohol tolerance, and this stage is called the at-risk stage.

Related Topics
My heart beats fast and eyes become red if I drink alcohol. Is there a treatment?
Can multiple myeloma be misdiagnosed over chronic alcoholism?
I have borderline personality disorder and obsession. Will Fluoxetine help me?

It is the next progressive stage wherein the individual starts thinking more about alcohol consumption. They start keeping alcohol intake a secret and drink alone. Also, they begin to have their drinks even when they are not in social gatherings.

This stage occurs when alcohol consumption goes beyond the control of the individual. They start drinking alcohol in a manner that brings about rage to the family, work, and social life. There can be evident organ damage in the laboratory test reports taken.

At this stage, taking alcohol becomes the sole purpose and focus of the individual's life to the point that they avoid food, relationships, happiness, and health. As the name suggests, there is severe organ damage in this stage that can bring about fatality.

When Do Individuals Take Up Alcohol Addiction?

Although the exact cause behind alcohol addiction is not specific, the following have been attributed to be the cause:

How to Identify Addiction and Get Help?

If a person met any three of these six criteria at any given time in the past year, then they have developed an alcohol dependence and are in dire need of urgent psychiatric and medical treatment.

How Can Addiction Be Treated?

1. Pharmacological: In this method, medicines are used first to detoxify the patient, that is, get alcohol out of the system, and different medications are then given with which the person can abstain from the use of alcohol in the future and its craving.

a. According to the United States Food and Drug Administration, alcoholism can be treated by two drugs, namely,

b. Vivitrol is an injection used in some patients to help them recover from alcohol use disorder. It is a version of Naltrexone.

c. In some patients, Gabapentin and Topiramate also help in reducing the craving for alcohol. In the earlier days, Disulfiram was used, which is not usually preferred. These medications help in reducing alcohol obsession.

2. Non-pharmacological: 'Where there is a will, there is a way.' If a person wants to quit alcohol, he must have the willpower to do so. This can be built by using motivation enhancement techniques, cognitive behavior therapy, brief intervention, family therapy, etc.

a. Behavior Therapy - A counseling session with a mental health professional has a more significant impact on the behavior. Of the many behavioral therapies available, cognitive behavioral therapy, motivation therapy, 12-step facilitation, and contingency are the most preferred techniques that provide optimum results.

b. Support Groups - Meeting other individuals with a similar goal can help overcome alcohol addiction. Several support groups are available. Alcohol Anonymous (AA), Rational Recovery, Celebrate! Recovery, Recovery Dharma, and nine other support groups have been approved in the United States. These groups not only help in stopping alcohol abuse but also prevent relapse.

It can be concluded that the growing prevalence of alcohol abuse is a matter of concern, and urgent steps need to be taken to combat this social evil. When you have an alcohol addiction, see a physician and get rid of it with no further delay. There is always a treatment for your alcohol addiction, and reaching out to a healthcare provider can help identify the best possible treatment.

What Are the Signs and Symptoms of Chronic Alcoholism?

What Happens to Your Body if You Are an Alcoholic?

If a person is an alcoholic, they will start losing their motor coordination, and they will start walking in an abnormal way. The vision becomes blurred, and the speech is not clear. In the long run, all the organ systems of the body start its impairment due to the negative influence of alcohol.

What Are the Signs of Liver Damage From Alcohol?

The signs of liver damage due to alcohol are:
- Drowsiness or confusion.
- Swelling in the ankles and tummy.
- Weight loss.
- Feeling sick.
- Loss of appetite.
- Passing blood in your stools or vomiting blood.
- Yellowing of the eyes and skin (jaundice).

How Do You Know You Are an Alcoholic Person?

If you are an alcoholic person, you will give a lot of excuses both in personal and professional life to drink alcohol. Your mood would not be stable, and you might get excessive anger. You might also experience memory loss and excessive irritability.

Do Alcoholics Get Drunk Quicker?

Alcoholics are known to have developed a certain degree of tolerance for the levels of alcohol. The alcohol is rapidly metabolized by the body and is easily eliminated from the system. So, they tend to consume higher quantities of alcohol in a quicker manner.

Will I Lose My Weight if I Stop Drinking?

If chronic alcoholics stop drinking alcohol, they might experience weight loss. The composition of the body is known to improve, and your stomach will lose its belly fat. Some patients also experience weight gain after stopping the consumption of alcohol. Both are considered as normal unless there is a drastic change.

What Happens When I Stop Drinking Suddenly?

When you stop drinking alcohol suddenly, your body will start longing for the effects of alcohol. The person might also experience severe withdrawal symptoms like tremors in the hands, anxiety, headache, and insomnia. It is the best option to get help from your doctor if you are planning to quit alcohol.

Does Alcohol Cause Belly Fat?

Yes, alcohol can cause belly fat. The additional calories present in the alcohol gets deposited as fat. It is mostly seen in the belly region. It is not specific that the fat would be stored only in the belly. Depending on the body type of the individual, the fat gets stored.

Can the Brain Heal Itself From Alcohol?

Where Do You Itch With Liver Disease?

Some people with liver disease will have itching in their soles, palms, and any part of the limbs. This itching is known to aggravate during the evening and night. Itching in the morning time is very rare.

How Long Can You Live With Alcoholic Liver Disease?

The life expectancy of people with alcoholic liver disease is around two years. A minor category of people has a survival period of around five years. The prognosis becomes poor if severe complications like ascites, gastrointestinal bleeding, and encephalopathy occur. The lifespan of an individual depends on their health condition.

What Are Complications of Chronic Alcoholism?

What Is the Most Common Complication of Alcohol Abuse?

Alcohol abuse is known to cause distress to the central nervous system of an individual. Stimulation is the initial reaction of some people. Muscle coordination will be lost in the body. The speech becomes slurred, and the patient is unable to walk properly. Heavy drinking habits can result in life-threatening complications like death.

What Diseases Does Alcoholism Cause?

The consumption of alcohol can invite the following complications, such as:
- Heart disease.
- Liver disease.
- Stroke.
- Gastrointestinal diseases.
- Cancer of the breast, colon, liver, throat, mouth, and esophagus.

Does Alcohol Cause Long Term Damage?

Long term alcoholism can cause severe long term damages like mental and physical illness. In addition to this, it can cause cardiovascular disease, cancer, and liver damage. In the brain, gray matter and white matter are diminished.

What Are the Stages of Alcoholic Liver Disease?

What Are the Symptoms of End-Stage Liver Disease?

The symptoms of end-stage liver disease are:
- Yellowing discoloration of eyes and skin (jaundice).
- Easy bleeding tendency.
- Abdominal pain.
- Intense itching.
- Nausea.
- Loss of appetite.
- Difficulty in concentration.
- Swelling that occurs due to fluid buildup in your legs and abdomen.
- Memory loss.

How to get someone to stop taking alcohol forever?

Query: Hello doctor,My husband takes too much alcohol daily. I want him to stop alcohol forever. About one week before, we have done a health checkup. His SGPT level has increased by 108. What should I do now?  Read Full »

Is there any medicine to overcome the effects of alcohol?

Query: Hi doctor, I am contacting you regarding an uncle of mine. He is 40 years old. His health issues are related to alcohol (beer). He drinks quite a few times a week. When he starts drinking, he drinks a few liters before stopping. He also smokes, but only sometimes. He finds heavy breathing after ju...  Read Full »

Article Overview: An obsessive-compulsive personality disorder is a mental illness defined by strict orderliness, control, and perfectionism. Read on to learn about it. Read Article

What Is Obsessive-Compulsive Personality Disorder? It is not unusual to be orderly, diligent, or stubborn. In some instances, these personality traits may even come in handy. However, when these traits are taken to an extreme, they can negatively impact the quality of a person's emotional, physical,...  Read Article

Do you have a question on Personality Disorder or Control Alcohol Drinking?