Gastroesophageal reflux disease (GERD) results in heartburn, as the stomach acids regurgitate into the esophagus. Learn about its symptoms, risk factors, and treatment. 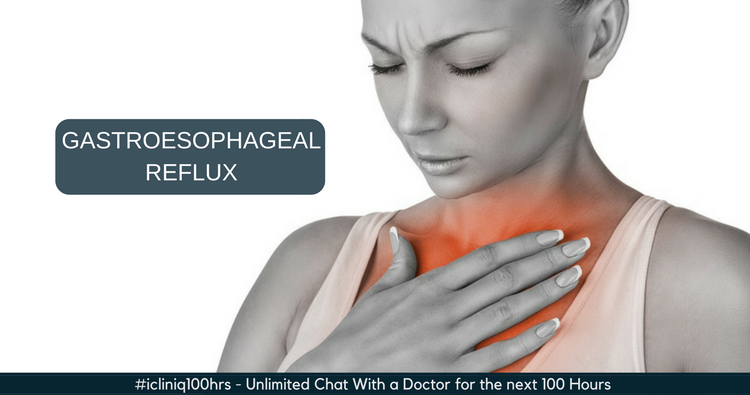 Gastroesophageal reflux disease (GERD) occurs due to the gastric acid refluxing back up the esophagus (food pipe).

The management of GERD includes a combination of medications as well as diet and lifestyle modifications.

Related Topics
I have GERD. Can you suggest any treament?
How to Treat Heartburn?
Taking Pantoprazole for GERD. Is any drug interactions between Pantoprazole and Voltaren?

The Need for Endoscopy

GERD is diagnosed with the patient's symptoms and the positive response to treatment. An endoscopic evaluation is not necessary unless in the following situations:

What Are the Various Causes of Gastroesophageal Reflux Disease?

The following are the various causes that could result in gastroesophageal reflux disease.
- Obesity.
- Intake of a heavy meal followed by lying on your back or bending below.
- Eating before bedtime or lying down immediately after a meal.
- Intake of certain drugs such as Aspirin or Ibuprofen, some muscle relaxants, and certain antihypertensive medications.

Is It Possible to Cure GERD Permanently?

What Foods Should I Avoid When I Have GERD?

The following are foods that you should avoid if you are diagnosed with gastroesophageal reflux disease.
- Foods that are rich in fat content. This is because fried foods can cause the lower esophageal sphincter to dilate more than the required amount.
- This leads to the accumulation of excess stomach acid (HCL). This accumulated acid will enter into the esophagus.
- Tomatoes.
- Citrus fruit like oranges.
- Garlic.
- Onions.
- Spicy foods.
- Caffeine and carbonated beverages.
- Mint.

The factors determining the treatment outcome in a gastroesophageal reflux disease are
the patient's age, severity, and comorbidities. The condition is easily curable when the patient is an adult, and proper medical attention is given. However, it can become a problem if it is not treated. This is because hydrochloric acid reflux damages the tissue lining the esophagus, leading to severe inflammation and pain. In adults, chronic, untreated gastroesophageal reflux disease can cause permanent damage to the esophagus, and sometimes even tumors can arise.

Is It Possible to Cure GERD Naturally?

Gastroesophageal reflux disease (GERD) cannot be treated naturally. However, specific lifestyle changes can help in reducing the severity and symptoms of the condition. They are as follows.
- Avoiding the triggers of reflux.
- Avoiding spicy food.
- Sleeping in an elevated bed.
- Taking proper treatment and regular follow up.
- Eating fiber-rich food.

What Is the Best Treatment for GERD?

The following are the best medications available to treat gastroesophageal reflux disease.
- Antacids.
- Histamine blockers.
- Proton pump inhibitors like Omeprazole.
- Prokinetic agents.
However, it is essential to note that these drugs are unsafe without proper medical advice and can lead to potential side effects.

How Long Should I Take GERD Treatment?

To reduce gastroesophageal reflux disease symptoms, potential acid suppression therapy must be given to the patient at least for two or eight weeks. It would help if you continued until healing improves. You should discuss with the doctor regarding the duration of GERD treatment.

How Long Will I Need to Take Omeprazole for GERD?

The first line of treatment for adults who are diagnosed with gastroesophageal reflux disease is 20 milligrams (mg) of Omeprazole once a day before the intake of food. It has to be taken at least eight weeks. For children, the dose and duration of treatment are primarily based on body weight.

What Are the Most Common Symptoms of GERD?

The following are the frequently seen symptoms in patients who are diagnosed with gastroesophageal reflux disease.
A burning sensation in the upper part of the abdomen and chest, especially after eating. It might be especially worse at night.
- Chest pain.
- Difficulty in swallowing
- Reflux of food.
- The frequent feeling of sour liquid in the mouth.
- Lump in the throat.

How to Identify GERD in Babies?

Identifying gastroesophageal reflux disease in babies can be quite complex. However, a doctor will diagnose your baby with gastroesophageal reflux disease if he or she has the following symptoms.
- Spitting up milk or foods and vomiting.
- Reluctant to eat and taking excessive time to eat and swallow.
- Irritability during feeding.
- Wet burps.
- Hiccups.
- Frequent episodes of cough or recurrent pneumonia.
- Choking.

Is It Possible to Cure GERD With Diet?

Can I Diagnose GERD at Home?

No, you can not definitively diagnose gastroesophageal reflux disease at home. You can only note its symptoms. To diagnose it, proper medical consultation is required. It will involve the following.
Thorough and focused medical history taking and physical examination.
- Upper endoscopy.
- Ambulatory acid (pH) probe test.
- Esophageal manometry.
- X-ray of your upper gastrointestinal tract.

How Can I Relieve GERD Pain?

The following are specific lifestyle changes and remedies that can help to cope up with the pain caused by gastroesophageal reflux disease.
- Maintain a healthy body weight.
- Quit smoking and alcohol.
- Elevate the head of your bed, which can prevent acid easily refluxing through your esophagus.
- Do not lie down after the intake of food.
- Eat your food slowly and chew it thoroughly well.
- Avoid foods and drinks such as chocolate and coffee that trigger reflux.
- Avoid heavy meals.

What Are the Symptoms That Differentiate Gerd From Chest Pain?

If the patient is suffering from an acute episode of chest pain, he or she might experience the following symptoms and the common symptoms of gastroesophageal reflux disease.
Tightness in the center of the chest.
- A feeling of heaviness in one or both arms.
- Pain that radiates to the arms, neck, jaw, lips.
- Shortness of breath.
- Nausea and vomiting.
- Dizziness.
- Loss of appetite.
- Profuse sweating.

What Type of Health Issues Can Lead to the Development of GERD?

The most common conditions seen in patients that can increase their chances of developing gastroesophageal reflux disease include the following.
- Obesity.
- Pregnancy.
- Hiatal hernia.

Does GERD Affect the Teeth?

Yes, it is a fact that milk can temporarily control the activity of stomach acid. However, the nutrients in milk, especially the fats present in it, stimulates the stomach to secrete more acid. These patients might consume fat-free milk to a limited extent.

What Are the Probiotics That Can Prevent GERD?

Probiotic supplements that contain Lactobacillus acidophilus are frequently used for symptoms such as stomach burn and other gastric problems such as diarrhea and constipation. The bacteria in probiotics are "gut-friendly" and help maintain a balance in the digestive system between good and harmful bacteria.

Is GERD a Cause of Esophageal Cancer?

Why Does Gerd Cause Difficulty in Breathing?

Gastroesophageal reflux disease causes difficulty breathing because stomach acid that refluxes into the lower esophagus can sometimes enter the lungs. This occurs mainly when a person is sleeping. This can cause inflammation of the airways. This can be a potential cause of aspiration pneumonia.

Does Constipation Aggravate the Symptoms of GERD?

Yes, chocolate causes gastroesophageal reflux disease symptoms. Cocoa makes the intestinal cells relax the lower esophageal sphincter. This leads to the release of a surge of serotonin. When this muscle relaxes, gastric contents can reflux through the sphincter. This causes a burning sensation in the upper abdomen. Chocolate also contains caffeine and theobromine, which can aggravate the symptoms.

What Foods Can a GERD Patient Eat?

The following are the list of foods that a person affected with gastroesophageal reflux disease can eat.
- Fresh green vegetables.
- Ginger.
- Oatmeal.
- Non-citrus fruits like mangoes and bananas.
- Egg white.

What is the reason for heart burn for four months?

Query: Hello doctor, I am a 35-year-old male having daily heartburn running for more than four months. Currently, having Omeprazole and Domperidone.  Read Full »

It feels like something is stuck in my throat. Please help.

Query: Hi doctor, I am a 23 year old male who has been experiencing some symptoms related to my voice and throat. For the past few months, my voice has not been as deep as it has always been. If I try to lower it to how it was before, it takes a lot of effort and still does not sound right. I am constantly...  Read Full »

How can I treat the pain a little left under my Adam's apple?

Query: Hello doctor, There is pain under Adam's apple a little to the left. I have a history of acid reflux. There is a pain in the throat with acid reflux. I did see an ENT about two years ago. Everything was fine except for swollen vocal cords due to the acid reflux. I also had thyroid studies and ...  Read Full »

Do you have a question on Heartburn or Gastroesophageal Reflux Disease?