How to Treat Heartburn?

The burning sensation in the chest due to acid regurgitating into the esophagus is called heartburn. Learn the causes, treatment, and prevention of heartburn. 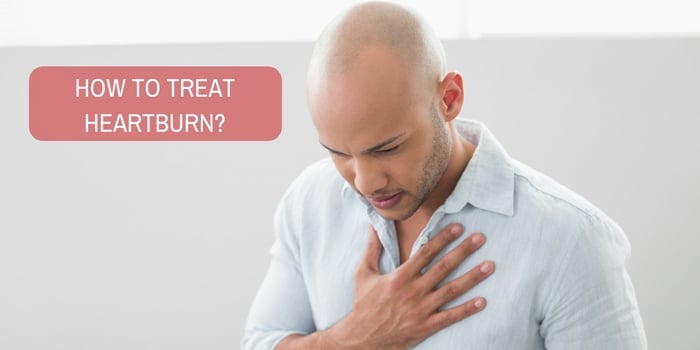 Usually at night, we may feel a sour liquid in our throat coming from beneath or burning sensation in our upper tummy. The pain goes up through our chest to the throat. Sometimes we fear it as a heart attack. This is called heartburn or gastroesophageal reflux disease (GERD) in medical terms.

How Does It Happen?

The food we eat starts getting digested right from the mouth up to the large bowel. Food passes through the mouth to the throat and then food pipe, stomach, small and large bowels, rectum and at last excreted as feces. Every part of the digestive system plays its role in digesting food. Stomach is unique from other parts as it has acid in it. Yes, stomach produces hydrochloric acid (HCl). This helps in digestion and also kills germs that may be present in unhygienic food.

The hydrochloric acid is present only in the stomach. A functional valve at the lower end of the food pipe called the lower esophageal sphincter preventes the reflux of acid back into the food pipe. It remains closed most of the time and opens for a short time while we swallow food or liquid and then closes again. Sometimes, it opens for short times even without food, to eliminate the air that is swallowed or gas that is produced by some chemical reactions in the stomach. These transient openings are for very short periods. In some individuals, the openings of this valve are recurrent or for longer duration. In that case acid may come back into the lower part of the food pipe and cause burning of walls of the pipe. This causes pain or burning sensation and it is due to acid reflux.

Some common risk factors of acid reflux are as follows:

Related Topics
I have sore throat, slight cough and post nasal drip. What can I take?
Is Pantoprazole not ideal for kidney patient?
Could Omeprazole cause changes in ECG and increase the heart rate?

In this, a probe is inserted into food pipe’s lower end, which measures its pressure. If it is decreased, then it causes acid to reflux back.

In this also, a pH probe is inserted into the food pipe through mouth to measure pH of the food pipe continuously for 24 to 48 hours. If it is less than 4, then it gives clue to acid reflux. Normal pH is around 6. This test is also called Bravo test.

In this test a flexible probe is passed through the mouth to the stomach, which has a camera to view inside the food pipe and stomach. It is also used to remove a small piece of tissue from there to test, which is known as biopsy.

Sometimes a medicine that suppresses acid production is given and if there is symptomatic improvement, then the treatment will be continued.

If you suffer from recurrent heartburn, then the following steps may be taken to decrease or prevent further episodes.

Are you suffering from heartburn? Consult a heartburn specialist online --> https://www.icliniq.com/ask-a-doctor-online/medical-gastroenterologist/heartburn

Does Stress Cause Heartburn?

Lack of sleep and high stress can increase the stomach's acid levels, thus leading to heartburn symptoms. For pregnant women, progesterone might relax the muscles of the esophagus and lead to heartburn. In addition to these conditions, smoking can also increase stomach acid levels, thereby causing heartburn.

Drinking water will aid in the process of digestion. It will also help in the hydration of the body. Frequent consumption of water can relieve the symptoms caused by gastroesophageal reflux disease. You can also try drinking ginger tea for heartburn.

What Foods Give You Heartburn?

How Do You Stop Heartburn?

You can follow the below tips to overcome heartburn.
- Stand up straight when you have heartburn. Laying down will increase the intensity of the condition.
- Wear loose clothing.
- Drinking a mixture of baking soda with water.
- Chewing gums can help in diluting the acid.
- Keeping your upper body in an elevated position.
- Consumption of licorice supplements.
- Eat ginger.
- Drinking apple cider vinegar.

What Can I Drink to Relieve heartburn?

Why Am I Suddenly Getting Heartburn?

Sudden heartburn might be a sign of the following conditions.
- Hiatus hernia.
- Acid reflux.
- Stomach ulcer.
- Gastrointestinal disease.
In addition to these conditions, sudden heartburn can occur due to overeating, alcohol, tight clothing, and spicy food.

Is Milk Good for Heartburn?

Milk might not be a good option for heartburn in some patients. Some medical researchers suggest that milk can relieve heartburn, but milk is known to stimulate the production of acids in the stomach in practical cases. So, milk is not a recommended option for all types of patients. You should get recommendations from the doctor before consumption of milk.

How Do You Sleep With Heartburn?

While sleeping with heartburn, make sure you keep your body elevated. You can sleep on a wedge-shaped pillow. It has to have a minimum thickness of 6 to 10 inches at one end. You can also sleep on your left side to relieve the symptoms of heartburn.

When Should I Be Worried About Heartburn?

All cases of heartburn are not serious conditions. Sometimes, it can happen due to excessive vomiting in pregnancy. In such cases, the patient need not worry about heartburn. But, if the heartburn occurs more than two times a week, it is necessary to immediately consult a doctor. If the patient has gastroesophageal reflux disease, then they might experience heartburn a minimum of three times a week. In such conditions also it is necessary to consult a doctor.

Are Bananas Good for Heartburn?

Banana is a fruit that contains low levels of acid. The high fiber content in bananas can boost the process of digestion. Many indigestion problems can be overcome by eating bananas. So, bananas are really good for heartburn. All the fruits that are having low acid content can be consumed for heartburn.

What Is the Fastest Acting Heartburn Medicine?

When Does Heartburn Occur All Day?

Heartburn occurs when the lower part of the esophagus relaxes at the wrong time. This will result in the backflow of the acid into the esophagus. This will cause heartburn throughout the day. The patient will feel severe discomfort and difficulty in eating.

How Can You Tell the Difference Between Heartburn and Chest Pain?

Chest pain can happen anytime due to the underlying condition. But, heartburn can happen only after the meals because it is mostly a gastrointestinal problem. The symptoms of chest pain are usually seen, along with other symptoms like breathlessness. This does not happen in the case of heartburn.

How Long Can a Heartburn Attack Last?

The symptoms of heartburn can last for two or more hours. In case the heartburn is very mild due to the consumption of spicy foods, then the heartburn will stop after the consumed foods have been digested. There are possibilities for the heartburn to reoccur if the person lies down immediately after eating.

I am having loose motions and stomach cramps. Can you suggest a tablet?

Query: Hello doctor, I am 50 years old lady. I am having loose motions and stomach cramps for the last two days. Can you suggest a tablet?  Read Full »

Will switching to Esomeprazole help in symptoms caused due to Omeprazole?

Query: Hello doctor, I have been experiencing acid problems. I keep burping after eating. I started to take 20 mg Omeprazole. I have been taking it for three days, once daily but I experience side effects such as muscle weakness, headache, and shortness of breath. How long should I take the medicine? And ...  Read Full »

Query: Hello doctor, I am on 40 mg Pantoprazole twice a day for GERD. I just took 50 mg Voltaren for a bad back and I am worried sick. I checked online and it said no drug interactions. I have not yet taken my nightly dose of Pantoprazole, should I not take it?  Read Full »

Do you have a question on Antacid or Omeprazole?