Cholera is a potentially dangerous infectious disease that leads to severe watery stools, which can quickly progress to dehydration and death if left untreated. Read about its causes, symptoms, diagnosis, and treatment options. 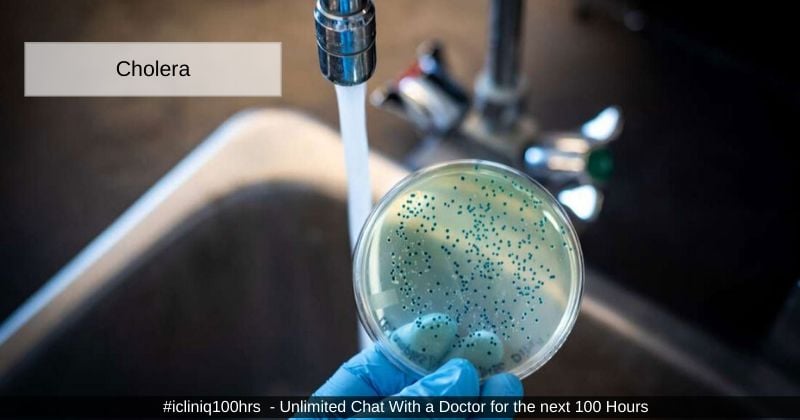 Cholera is an acute bacterial infection caused by the bacteria Vibrio cholera (V. cholera), which spreads by drinking contaminated water. It causes watery and loose stools, severe loss of body electrolytes, and dehydration, which can be fatal. If left untreated, it rapidly progresses to dehydration and death within hours, commonly in infants and children. People who survive this infection have long-term immunity against this bacteria.

V. cholera bacteria were discovered by the German bacteriologist Robert Koch in 1883. While he was studying an epidemic in Egypt, he found these bacteria inside the intestines of people who died of cholera. But he was unable to isolate the bacteria. Later when he went to India, he successfully isolating the bacteria. These bacteria live in damp and moist clothes and soil and are present in the stools of infected people. Diarrhea is triggered by the poison produced by toxic strains of cholera.

In the US, cholera was prevalent in the 1800s, but now due to modern sewage and water treatment, cholera is virtually eliminated in the US and other industrialized countries. But in other underdeveloped countries, such as Southeast Asia, Africa, and Haiti, around 3 to 5 million get cholera every year, and around 100,000 people die of cholera in the world every year.

What Are the Symptoms of Cholera?

Mild cases of cholera do not cause any symptoms, and the individual might not even know they are infected with the bacteria. But such people can be contagious and can contaminate water, as they shed the bacteria in their stools for up to two weeks. Most cholera cases only result in mild symptoms, and only 1 in 10 adult individuals develop severe symptoms.

Children also show the same symptoms as adults do. The point to remember is that children get dehydrated faster and can go in hypovolemic shock much quicker than adults. The symptoms of shock in children are seizures, altered consciousness, and coma.

The bacteria Vibrio cholerae causes this infection. The severe symptoms that are seen in this infection results from the toxin CTX, which the bacteria produce in the intestine. This toxin interferes with the exchange of sodium and chloride in the intestinal walls, which makes the body release excess amounts of water. This leads to watery stools, fluid, and mineral loss. You can get infected by drinking contaminated water, eating raw shellfish and uncooked fruits and vegetables.

The Life Cycle of Cholera Bacteria:

How Is Cholera Diagnosed?

Cholera is usually diagnosed based on the signs and symptoms in endemic areas. To confirm the diagnosis, cholera bacteria are identified in the stool sample. For quick diagnosis, rapid cholera dipstick test is available.

How Is Cholera Treated?

The treatment options include:

These help in adding fluids to your body, and prevent dehydration and other complications.

What Are the Complications of Cholera?

As previously mentioned, this infection can become fatal within hours. The other less severe complications of cholera include:

Follow these preventive tips to reduce the risk of cholera infection:

The cholera vaccine, called Vaxchora, is now available in the US. Adults traveling to countries affected by cholera can take this vaccine 10 days before they travel. It is a liquid vaccine, which has to be taken orally.

The chances of you getting cholera are very less even if you travel to a country where there is a threat of cholera. You can prevent this infection by following the preventive measures. For more information on ways to prevent or treat this infection, consult a doctor online.

I have uncontrollable watery diarrhea and so cannot visit my GP. Please help.

Query: Hello doctor, I am a 52 year old female. I am 5 feet 9 inches tall and weigh 11 stones exactly. For the past five weeks, I have had uncontrollable watery diarrhea, no blood. Not much pain. I am type 2 diabetic. I am beginning to feel very weak and tired now. At night especially, I find I have been ...  Read Full »

Will dehydration and smoking cause changes in CBC report?

Query: Hello doctor, I am a 27-year-old male. I have had dizziness, weakness and shaking, sometimes chest pain, and shortness of breath. I have stiff upper back pain, and most of my body clicks and pops when I move. I have also had a loss of appetite, like no appetite at all and weight loss. I had bad upp...  Read Full »

Why am I having an increase in alkaline phosphatase level?

What Is the Difference Between Raw, Cooked and Processed Food?

Do you have a question on Bacterial Infection or Dehydration?