Ebola virus disease is a deadly viral infection caused by one of the five known species of the Ebola virus. Read this article to know more about the symptoms, causes, and treatment. 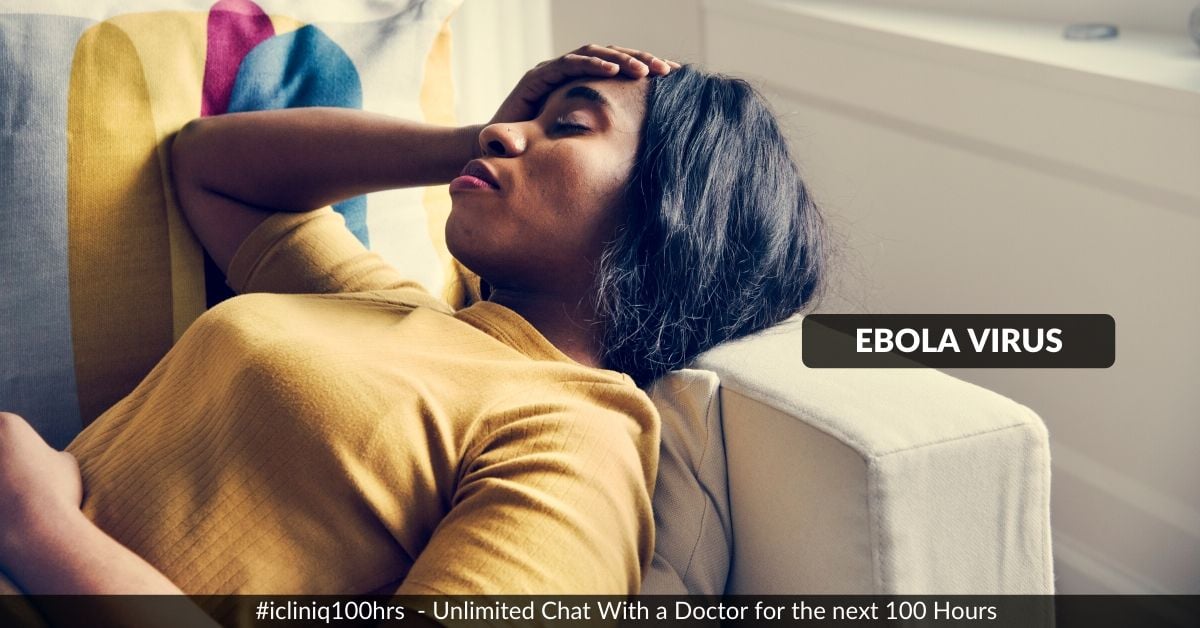 Ebola virus disease is known by the other name Ebola hemorrhagic fever. It is a very rare disease, but can cause severe complications resulting in death even. This virus gets transmitted to humans from wild animals. The mortality rate varies in different countries, but about 50% of the infected population are known to die. It can occur suddenly, resulting in detrimental effects. Earlier, when it occurred suddenly earlier, scientists and doctors were not able to study the virus properly. So, the disease led to uncontrollable outbreaks in 1976. This outbreak occurred in a village near the river called Ebola. That is how the disease gets this name. This virus belongs to a family called Filoviridae.

How Is the Ebola Virus Transmitted?

The specific wild animals from which the Ebola virus is transmitted are bats. These animals are the natural hosts. Once it affects an individual, it can quickly spread to others by direct contact with blood and other bodily secretions. It can also be transmitted from animals that were sick or dead.

What Are the Risk Factors of the Ebola Virus Disease?

The risk factors of Ebola virus disease are:

What Is the Incubation Period for the Ebola Virus Disease?

The incubation period for this disease ranges from 2 days to 21 days. It is after this duration the symptoms start showing up. If a person is known to be affected by an Ebola, he cannot transmit the infection until and unless the symptoms are clearly visible.

What Are the Symptoms of the Ebola Virus Disease?

The symptoms of Ebola virus disease are:

How Is Ebola Virus Disease Diagnosed?

This disease is very difficult to diagnose because symptoms might resemble malaria, meningitis, fever, and typhoid. Ebola shows symptoms similar to the symptoms of pregnancy. The following tests are the best diagnostic methods for Ebola virus disease.

What Are the Treatment Options for Ebola Virus Disease?

The possible treatment options are drug therapy and immunotherapy. In the recent outbreak from 2018 to 2019, a drug was identified, but the research is still under process. The treatment relies mainly on supportive care, which includes rehydration with intravenous and oral fluids. There is no proper treatment available for this disease. But it is possible to control the symptoms.

The two important aspects of treatment are:

Supportive therapy: This might involve pain relief, offering comfort and counseling, and emotional support. Rehydration is constantly done and checked.

What Are the Prevention Measures?

Safeguarding of pregnant women and breastfeeding mothers should take precedence over the remaining population. Vaccination should be made available to them first. Proper control of the outbreak depends on the intervention methods, proper surveillance of the cases, safe burial procedures of the dead, and isolation of the positive and suspected cases. Social distancing should be maintained, and gathering in common places should be avoided. Proper awareness is created among the public so that they will follow safe sanitation measures.

It is necessary to reduce the risk of transmission in animals such as monkeys, bats, apes, and porcupines.

Meat should be properly cooked and consumed. Fruits and vegetables should be thoroughly washed before cooking.

The second step is to reduce the risk of transmission among humans. This can be achieved by practicing proper protection measures. For maintaining correct hygienic practices, gloves, mouth masks, goggles help. Regular hand washing should be practiced by the patients who are visiting the hospital. Hand Washing techniques should be followed by the persons delivering healthcare also.

If any of them are suspected, proper monitoring should be done by healthcare professionals for a minimum of 21 days. This is done to isolate any suspected positive case from healthy individuals.

Sexual contact can also be the reason for transmission. Safe sexual practices are to be followed. Contact with bodily fluids should be completely avoided.

In a healthcare setting, irrespective of the provisional diagnosis, all the instruments should be well sterilized. Sanitation should be followed throughout the hospital setup.

What Is the Vaccination for Ebola?

An experimental vaccine for Ebola was found to be very effective in guinea pigs during the year 2015. This vaccine showed a drastic change in the public. A vaccine called rVSV-ZEBOV was used during the last outbreak of the Ebola virus.

How Is the Prognosis?

Prognosis varies from one person to another. However, it is generally poor. If the virus has caused the destruction of the antibodies, then immunosuppression occurs. This reduces the capacity of the body to fight against the virus. But in most cases, if the infected person manages to survive, then it can indicate that the person might recover soon. Even after recovery, the person should follow up with their physician.

Are you facing any of these symptoms? Call a doctor online.

What Is the Treatment for Ebola?

Ebola is a rare and deadly virus, and research is still going on to treat ebola. However, the symptoms can be managed by taking fluids and electrolytes either orally or intravenously. Medication can also reduce symptoms like vomiting, diarrhea, fever, or pain.

What Are the Effects of Ebola on the Body?

The Ebola virus causes severe inflammation and tissue damage in the body. It is also known as hemorrhagic fever virus, as it can cause problems with the clotting system of the body and can cause internal bleeding.

How Does Ebola Gets Transmitted?

Ebola does not spread through the air like other infections like the common cold. It can spread from one person to another when they come in contact with infected blood or body fluids. It is commonly seen in travelers, health workers, or the general public who do not care for being in close contact with the infected person.

From Where Did Ebola Originate?

The Ebola virus was first discovered in the year 1976 near the Ebola river in the Democratic Republic of Congo. After that, the second outbreak occurred in South Sudan, approximately 500 miles away from the Ebola river. Since then, the ebola virus has infected people in several African countries.

Can a Person Recovers From Ebola?

The recovery from ebola depends upon good supportive care and the immune system of the patient. Patients who recover can develop antibodies for ebola in the body, which can stay resistant for at least ten years or longer. However, even after recovery, some people may have complications such as joint and vision problems.

What Organs Does Ebola Affect?

Can a Person Survive Ebola Without Treatment?


Ebola virus disease is usually fatal, and without any treatment, a person may not survive this condition. The chances of survival are very low, and a person has the chance to survive as soon as the treatment is started.

Does Ebola Contain DNA or RNA?

The Ebola virus contains RNA (ribonucleic acid), a type of genetic material similar to DNA (deoxyribonucleic acid). It contains the blueprint for creating new virus particles, and viruses use RNA to replicate.

How Many Vaccines Are There for Ebola?

Currently, there are two licensed vaccines for ebola. There is a single-dose Ad5-EBOV vaccine in China and a 2-dose rVSV/Ad5 vaccine in the Russian Federation. In addition, two more vaccines are still under investigation, including the rVSV-ZEBOV vaccine made by Merck and the Ad26.ZEBOV/MVA-BN-Filo vaccine by Janssen.

Why Is the Ebola Virus a Concern?

Ebola is a rare but fatal virus that can spread from one person to another. It can cause symptoms like fever and diarrhea and cause bleeding inside or outside the body. This virus spreads rapidly in the body and can damage the immune and blood-clotting systems of the body.

What Are the Interesting Facts About Ebola?


- Ebola is a rare and deadly virus affecting humans and nonhuman primates.
- This virus is usually found in the sub-Saharan Africa region.
- People can get the Ebola virus disease through direct contact with an infected animal or even with an infected dead person.
- Ebola is only contagious after the symptoms start appearing which is usually within eight to ten days of the disease.

Article Overview: A ruptured brain aneurysm is a potentially fatal condition that needs emergency care. This article helps you understand this condition and educates you regarding your treatment options. Read Article

This is a medical condition in which one of the arteries of the brain develops a weakened area that balloons out, like an inflated balloon. This can burst and result in bleeding within the brain. What Are the Symptoms of An Aneurysm? An unruptured aneurysm may not cause any symptoms. Some symptoms r...  Read Article

Is diarrhea in a baby due to viral infection?

How to cure my skin rashes?

Query: Hi doctor, I have rashes similar to the rash of SLE, swollen, painful and redness around the eyes, severe fatigue and muscle weakness. These symptoms occurred a few months back after I had an intestinal infection. The doctors suspected it to be dermatolysis too, thus having a skin biopsy done tomorr...  Read Full »

Do you have a question on Severe Fatigue or Headache?