Absence seizures, previously comprehended as petit mal seizures, are more common in children. Let us read on how it can be managed effectively in everyday life. 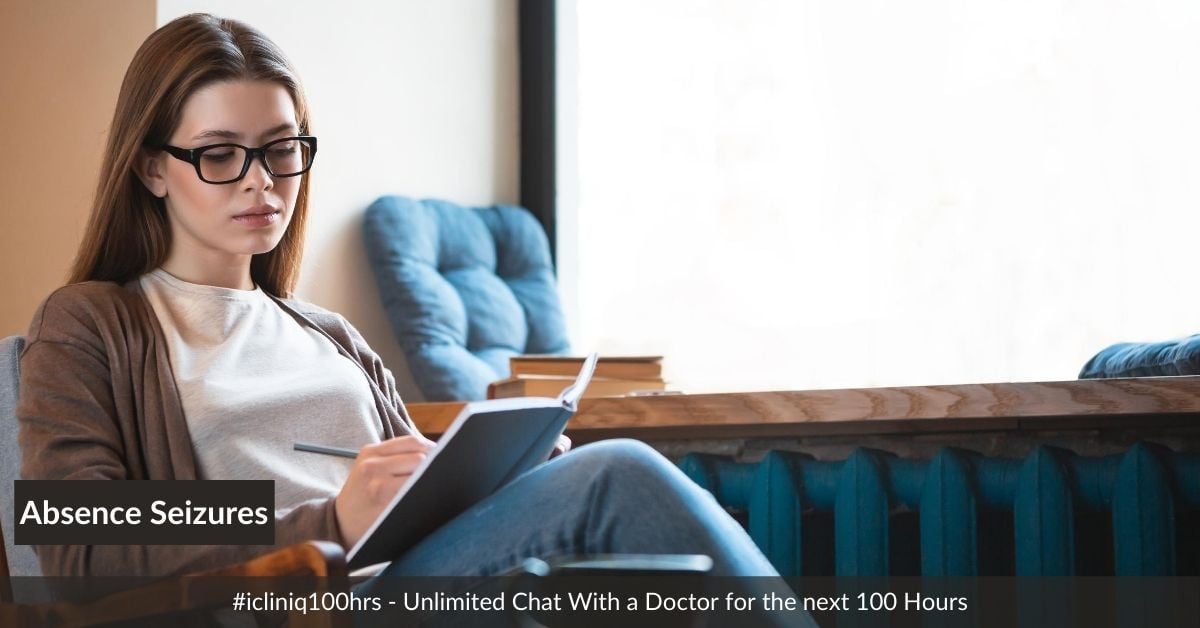 A seizure is caused by a brief period of abnormal electrical activity (electrical impulses) in a person's brain. It is a transient clinical event due to abnormal paroxysmal, excessive discharges from a group of central nervous system neurons. The seizure may present in the form of motor, sensory, autonomic, or psychic manifestations. An absence seizure has a generalized onset, meaning it starts on both sides of the brain simultaneously. In this type, there is a sudden loss of awareness characterized by blank staring that lasts for a couple of seconds.

What Are the Types of Absence Seizures?

There are two types of absence seizures. They are:

In typical absence seizures, the onset is with a blank stare, often mistaken for daydreaming. It lasts nearly 10 seconds and is followed by the return of consciousness.

In atypical absence seizures, the onset is also with a blank stare, but it lasts about 20 seconds and involves other involuntary actions such as lip-smacking, eyelid fluttering, jaw movements, and finger rubbing.

What Are the Signs and Symptoms of Absence Seizures?

Thesigns and symptoms of absence seizures are:

What Are the Causes of Absence Seizures?

Doctors are not sure of why it occurs in some children. But, it is believed to be hereditary. In some, it seems to be triggered by flashing lights or rapid breathing.

What Are the Risk Factors of Absence Seizures?

What Are the Complications of Absence Seizures?

How Are Absence Seizures Diagnosed?

Once a parent, teacher, or friend suspects something to be wrong, it is important to seek expert opinion without further delay. The doctor will recommend an EEG if he suspects a seizure.

How Are Absence Seizures Treated?

First, the patient should be shifted to a safe place, away from danger such as water, fire, and machine. Then, the patient should be turned to a semi-prone position to prevent aspiration. They should not be left alone until the full recovery from seizures as there may be drowsiness and confusion in the post-ictal stage, or the seizures may reoccur. Until the patient is fully recovered, they should not be given to eat. When they continue to prolong for more than 5 minutes or reoccur without the patient regaining consciousness, hospitalization is a must. The doctor may suggest certain medications to prevent the recurrence of episodes. Commonly prescribed drugs include:

The dose of the drug should be increased gradually until seizures are controlled, or side effects appear. When a single drug does not control seizures, a second may be added while the first drug is gradually withdrawn. In most patients, seizures are controlled with a single drug itself. But in some, a combination of two or more drugs may be needed to control the seizures. The treatment should be continued until there are no seizures for at least 2 to 3 years. During the drug administration, the patient should be monitored for side effects. Blood count, liver function test, and renal function test are done at regular intervals. In order to guide with appropriate dosage and to check the compliance, the serum level of the drug can be measured.

What Are the Preventive Measures of Absence Seizures?

Epilepsy is a brainiac sickness that drives people from having recurring seizures. The seizures occur if the brain's neurons or clusters of nerve cells send out faulty signals. People may experience abnormal senses and feelings or may behave in a different manner. They also have forceful muscle spasms or loss of consciousness. In general, more neurobehavioral disorders could be observed or developed if there is an increased frequency and severe seizures. Neurobehavioral disorders and other abnormal symptoms should be considered during the evaluation of epileptic patients both at the first consultation and during follow-ups.

What Is the Prognosis of Absent Seizure?

Children have been studied to have good responsiveness to anticonvulsant therapies. Nearly 75 % of the absence seizures cease by the teenage years. The prognosis is bad in children with learning disabilities, a familial history of seizures, generalized tonic-clonic or myoclonic seizures, or failed response to first-line pharmacotherapy.

Can Absent Seizures Cause Brain Damage?

Although it is an event occurring in the brain, absence seizures do not affect the organ or cause any IQ (intelligence quotient)  losses. Children might have a steeper learning curve owing to the lapses in consciousness. Peers, guardians, and educators might feel that the child is daydreaming or not paying attention.

Is It Possible for Absent Seizures to Worsen?

Untreated petit mal (absence) seizures can possibly worsen and, over time, may affect the child’s learning abilities, development, and behavior. With proper medications, children usually outgrow absence seizures by their teenage years, but it is possible for the condition to worsen into longer and more intense seizures.

Are Patients With Absent Seizures Disable?

Seizures have been included in the SSA (social security administration) blue book as a disability. A blue book listing is essential for receiving benefits. Even with a diagnosis and continuing therapy for epilepsy (seizures), the individual is expected to work for at least a year in order to claim social security benefits.

How Are Absence Seizures Triggered?

Does One Remain Conscious During Absence Seizures?

Absence seizures are neural events lasting for a brief period of time and characterized by a sudden lapse of consciousness. The person is unaware of the seizure and gives a blackout look or stares into empty space. The individual is also not aware of anything conveyed.

What Is the Time Span of an Absence Seizure?

Absence seizures are characterized by brief neural events translating to a lapse of consciousness. These events last anywhere between 2 to 20 seconds. Although rare, absence seizures can occur for more than 30 seconds and may last for a few minutes.

Is Absence Seizure a Genetic Disorder?

Evidence points to a genetic predisposition to absence seizures, and the condition tends to run in the family. The locus for childhood absence seizures is found on chromosomes 5q31.1, 5q34, 16p13, and 3q26.

What Looks Similar to Absence Seizures?

Onlookers may mistake absence seizures for ADHD (attention-deficit hyperactivity disorder), daydreaming, focal seizures with alteration of awareness, and non-epileptic paroxysmal events. The patient may not be aware of the passage of time during the seizure. This may lead to falling grades and educational difficulties.

Is It Possible to Have Memory Loss After an Absence Seizure?

Frequent and recurring absence seizures can lead to declining learning abilities and memory even without any neuronal injuries. Seizures, although starting in the temporal lobe, can cause a major blow to the hippocampus. It is also reported that absence seizure patients tend to forget things quicker than others.

Stress can be induced by any major life event and personal loss. Stress and emotional imbalance have been related to neurochemical imbalances and abnormal brain activity.  Hence, stress can trigger seizures. Evidence has proven a strong positive association between elevated stress levels and increasing stress frequency.

Is It Possible for Absence Seizures to Cause Speech Delays?

It has been reported that children with absence seizures show worse speech and language performance than children with focal epilepsy disorder. Epilepsy can cause temporary loss of function in some parts of the brain, translating to understanding, communication, and language difficulties.

What Is the Consequence of Untreated Absence Seizures?

Untreated absence seizures can worsen over time and may affect communication, learning, development, and behavioral abilities. Without meditation, the frequency and severity of the attacks may progressively increase, hampering daily activities.

Is It Possible to Trigger Seizures Through Excessive Screen Time?

Is It Possible to Get Absence Seizures While Asleep?

What are the side effects of long-term Clobazam use?

Query: Hello doctor, My son is 3.5 years old; studying in kindergarten. He has been diagnosed with benign childhood epilepsy. There is an epileptic form discharge of 8 Hz spikes from his right occipital lobe. His MRI and CT scan reports came normal. He feels involuntary movements in his left leg when he i...  Read Full »

Are there epilepsies that do not cause physical seizures?

Query: Hello doctor, I have been suffering from a wide array of mental symptoms for around nine years. Some years ago, I went to see a neurologist. He took an EEG, and found "epileptiform activity", I think in temporal lobes. So he said I have epilepsy and prescribed Valproate. He said my depersonalisation...  Read Full »

What is the outlook for long term antiepileptic medications?

Query: Hello doctor, I have already put my query to a neurologist. Still, I would like to get opinion from you as well. My son is 3.5 years old. He has been diagnosed with benign childhood epilepsy. His MRI and CT were normal. There are epileptic form of discharge 8 Hz spikes from right occipital lobe. Us...  Read Full »

Do you have a question on Seizure or Epilepsy?