Neurosyphilis is the infection of the brain and spinal cord in patients with syphilis, a sexually transmitted bacterial infection. Read the article to know about its types, diagnosis, and treatment. 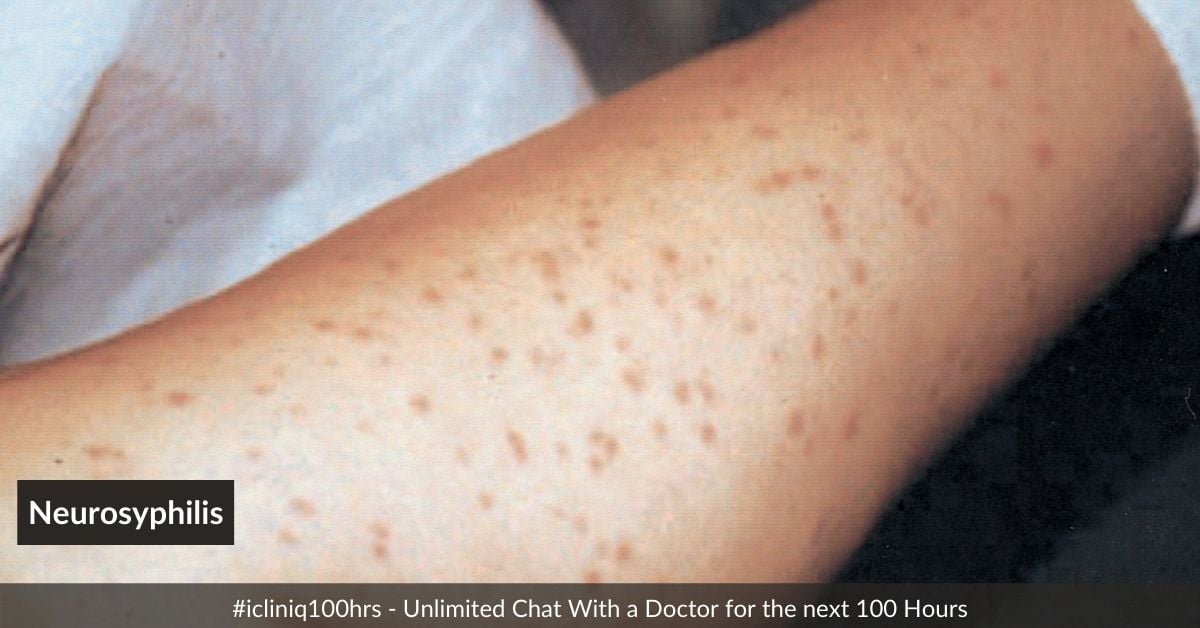 Neurosyphilis is a chronic, life-threatening infection of the central nervous system (CNS), involving the brain and spinal cord. It is caused by the spirochete bacterium Treponema pallidum.

Despite the absence of a definitive diagnostic test, several sets of criteria are used for diagnosis of neurosyphilis, including high CSF (cerebrospinal fluid), WBC (white blood cells) count, and/or a reactive CSF, VDRL (Venereal Disease Research Laboratory) with clinical symptoms. Early and adequate treatment is the key factor in the prevention of active neurosyphilis. The intravenous administration of aqueous crystalline Penicillin G 18 to 24 million units (MU) per day every 4 hours or continuously for 10 to 14 days is the first-line regimen in the treatment of neurosyphilis.

It is believed that, in most cases, the dissemination into the central nervous system occurs in the early stage of the infection. However, the neurological presentation of the infection could appear at any stage of syphilis.

Most commonly, neurosyphilis develops in untreated individuals who progress to the tertiary stage of syphilis, 10 to 30 years following the primary infection.

Despite the rare prevalence of early neurosyphilis, it has been detected that the rate of occurrence is significantly related to the treatment and is ten times higher in people receiving inappropriate therapy compared to those who are not treated.

Related Topics
Syphilis - Symptoms, Risk Factors, Treatment, and Prevention
Why am I having this one-sided head to toe nerve pain?
Kindly suggest ointment for balanitis.

Types of Neurosyphilis and Clinical Manifestation:

Once the bacteria infects the central nervous system, the body response could vary from asymptomatic to symptomatic, including a variety of manifestations. Neurosyphilis compromises five types with different clinical manifestations:

In the case of meningeal syphilis, symptoms could usually appear during the first year following the bacterial invasion, though the duration can extend from a couple of weeks to a couple of years. The clinical features of meningeal syphilis include signs of meningeal irritation, such as headache, nausea, vomiting, stiff neck, and of cranial neuropathies affecting cranial nerves VII, VIII, VI, and II, which could lead to visual and hearing impairment. Adequate treatment is required for active infection in order to prevent the progression to more serious types of neurosyphilis.

Meningovascular syphilis is another form of neurosyphilis, characterized by the presence of endarteritis (inflammation of the inner lining of the artery) and perivascular (surrounding the blood vessel) inflammation. The inflammation of the tunica intima and the surrounding artery causes a narrowing within the lumen of vessels, which eventually could contribute to the formation of cerebrovascular thrombosis, vessel occlusion, ischemia, and infraction. Usually, clinical manifestation starts to develop about seven years after individuals get infected. However, it could appear as early as a few months or delayed to several years following the initial infection.

The symptoms of meningovascular syphilis comprise the signs of meningeal syphilis with the presence of stroke syndrome, which mostly affects the middle cerebral artery and the branches of the basilar artery in young adults. In addition, it could be associated with subacute encephalitis presentation, including headache, insomnia, vertigo, and psychological disorders as decreased memory, mood change, and personality disorders.

Parenchymatous syphilis is composed of general paresis (general paralysis) and tabes dorsalis (locomotor ataxia), which are relatively rare regarding other forms of neurosyphilis, due to developed medical prevention, screening, and treatment. Typically, it develops as a result of cortical parenchymal damage following chronic meningoencephalitis. It occurs within several years after infection, usually 3 to 30 years in general paresis and 5 to 50 years in tabes dorsalis with an average of 15 to 20 and 20 to 25 years, respectively.

The presentation of general paresis is subdivided into early and late symptoms including headaches, irritability, decreased memory, personality changes, and insomnia in early manifestations, and emotional lability, memory loss, confusion, disorientation, delusions, and seizures in late manifestations. It is found to be as well associated with psychiatric disorders like depression, hallucinations, mania, and psychosis.

General paresis is a severe form of neurosyphilis, and patients could die within an average of 5 years if they are left untreated. Regarding tabes dorsalis, the clinical features could range from ataxic gait, pains in the limbs, balance problem, paraesthesia to bladder dysfunction, and vision loss.

While it is defined likely when all the above criteria are associated with elevated cerebrospinal fluid (CSF) protein or leucocyte count without other possible causes. Verified neurosyphilis is confirmed by the presence of reactive nontreponemal and treponemal tests with characteristic clinical symptoms and reactive VDRL in CSF without significant bloody contamination of the CSF.

Regarding the available treatments provided to patients with neurosyphilis, aqueous crystalline Penicillin G is used as first-line regimens, given intravenously at 18 to 24 million units (MU) either every 4 hours or continuously for 10 to 14 days. An alternative therapy could be offered instead of the recommended treatment and includes 2.4 MU of Procaine Penicillin administered by intramuscular injection once daily plus 500 mg of Probenecid given four times a day orally for a total duration of 10 to 14 days.

However, for late syphilis, an additional dose of 2.4 MU of intramuscular Benzathine Penicillin is recommended once a week for three weeks following previous regimens to establish an adequate duration of therapy. A follow-up after treatment is required to ensure a complete resolution of the infection. For that reason, a CSF examination should be performed every six months until normal results are detected. If CSF results remain abnormal within the next two years, patients need to be re-treated for neurosyphilis.

The latest data shows an increase in the total number of reported syphilis cases, including all stages, by 13.3 % from 2017 to 2018. Regarding the continuous rise of the overall syphilis rate, further public health interventions are required to reduce the numbers, control the spread, and prevent the progression of disease, especially with the absence of gold standard lab test methods. However, early application of adequate treatment could provide sufficient protection against active neurosyphilis and associated complications as neurological disorders, disability, and even death.

Can Neurosyphilis Be Treated?

Yes, it is possible to treat neurosyphilis with medications like antibiotic Penicillin. The treatment usually lasts for two weeks. The doctor will recommend regular blood tests and monitoring of the cerebrospinal fluid levels for better curing rates.

How Do You Get Neurosyphilis?

Is a Patient With Neurosyphilis Contagious?

Yes, the patient with neurosyphilis is contagious. It is most commonly noted during the primary stage of neurosyphilis. In this stage, a sore or chancre develops at another site of the entrance of bacteria. It is usually painless but can contribute to the spread.

Does Dementia Happen In Neurosyphilis?

Yes, dementia can happen in neurosyphilis. The common health problems seen in neurosyphilis are weakening of the muscles, emotional disturbances, and slurred speech. This can progress into the condition of dementia.

How Do You Test for Neurosyphilis?

The diagnosis for neurosyphilis is carried out using physical examination and blood tests. If the later stage of neurosyphilis is suspected, the doctor will suggest you for a procedure called a lumbar puncture. It determines the extent of infection in cerebrospinal fluid.

Can You Have Neurosyphilis and Test Negative?

What Stage Is Neurosyphilis?

Neurosyphilis often occurs at any stage of infection. The most common neurological symptom in the early part of syphilis is meningitis. It is known to occur along with the secondary stages, and it is usually seen within 12 months of initial infection.

Can You Recover From Neurosyphilis?

Yes, it is possible to recover from neurosyphilis. The good news for the patient is that 100 percent recovery is possible. After treatment, the patient should focus on preventive measures to maintain their good health. Medication therapy is helpful for most of the patients.

Can Neurosyphilis Come Back?

The rate of recurrence of neurosyphilis is rare. It does not mean that recovering from neurosyphilis does not cause an individual to affect again. Medical reports suggest that even after a successful recovery, some patients are noted to have a recurrence. So it is necessary to follow the instructions of the doctor to prevent severe complications along with recurrence.

What Happens to the Brain When Someone Has Neurosyphilis?

Neurosyphilis is an infection that specifically occurs in the brain and the spinal cord. It is a serious condition that could cause life-threatening complications—most of the patients with neurosyphilis experience a stroke in the initial month of infection. The blood flow to some parts of the brain is lost. This might result in a blood clot that will obstruct the arteries of the brain. In complicated cases, the brain cells will die, and the brain suffers temporary or permanent damage.

Can Neurosyphilis Be Detected by a Blood Test?

Yes, neurosyphilis can be detected with the help of blood tests. The only problem with blood tests is that it might require repetition of the tests after a prescribed period of time. However, blood tests are efficient in detecting the middle stage of neurosyphilis.

How Long Can You Wait Before Treating Neurosyphilis?

It is not advisable to wait for neurosyphilis treatment because it is a serious condition that requires immediate medical attention. The time taken for the completion of treatment procedures will last for more than two weeks. Since treatment is a long procedure, it is good to start the treatment as soon as possible. You should coordinate with your doctor to discuss the various treatment options.

How Is Neurosyphilis Transmitted?

Syphilis is transmitted through sexual routes. If it is left untreated, it can lead to a condition called neurosyphilis. The common cause of transmission is syphilis sores. Direct contact with these sores results in the transmission of neurosyphilis.

What are the types of neurosyphilis?

What Are the Symptoms of Neurosyphilis?

The common symptoms of neurosyphilis are:
- Numbness in the feet, toes, or legs.
- Abnormal walk or difficulties in walking.
- Mental problems, such as irritability or depression.
- Problems with thinking, such as poor concentration or confusion.
- Seizures, headache, or stiff neck.

I was misdiagnosed to have syphilis and had treatment. What to do?

Query: Hi doctor, I am a 24 year old male. Before a month, I visited a hospital in my hometown for pain on the penis. They conducted VDRL and TPHA test and said that the test came back as weak positive. So, it is the first stage of syphilis. They prescribed me an injection and some tablets for five days. A...  Read Full »

Why is my test still reactive even after taking treatment for syphilis?

Query: Hi doctor, I am a 37 year old married female. Five years ago, I got a job offer in abroad. When I had a medical checkup, I was found to be positive for VDRL and TPHA reactive. But, my husband's result was nonreactive. I took medicine as advised by my doctor. Now, when I went for a checkup, again t...  Read Full »

What are the preventive measures in case of slippage or breakage of condoms?

Query: Hi doctor, I am a 37 year old heterosexual male. I am HIV negative with no known STD. I always have safe sex. I always have very safe sex with girls who are not sex workers. But may have casual sex with others. Generally, I would imagine that they too would be practicing safe sex with their regul...  Read Full »

Do you have a question on Sexually Transmitted Diseases or Syphilis?