Written by
Dr. Sneha Kannan
and medically reviewed by Dr. Krishna B Bhalala

Syphilis is a highly contagious sexually transmitted disease (STD), which can result in fatal complications if left untreated. Read the article for information on its transmission, symptoms, and treatment. 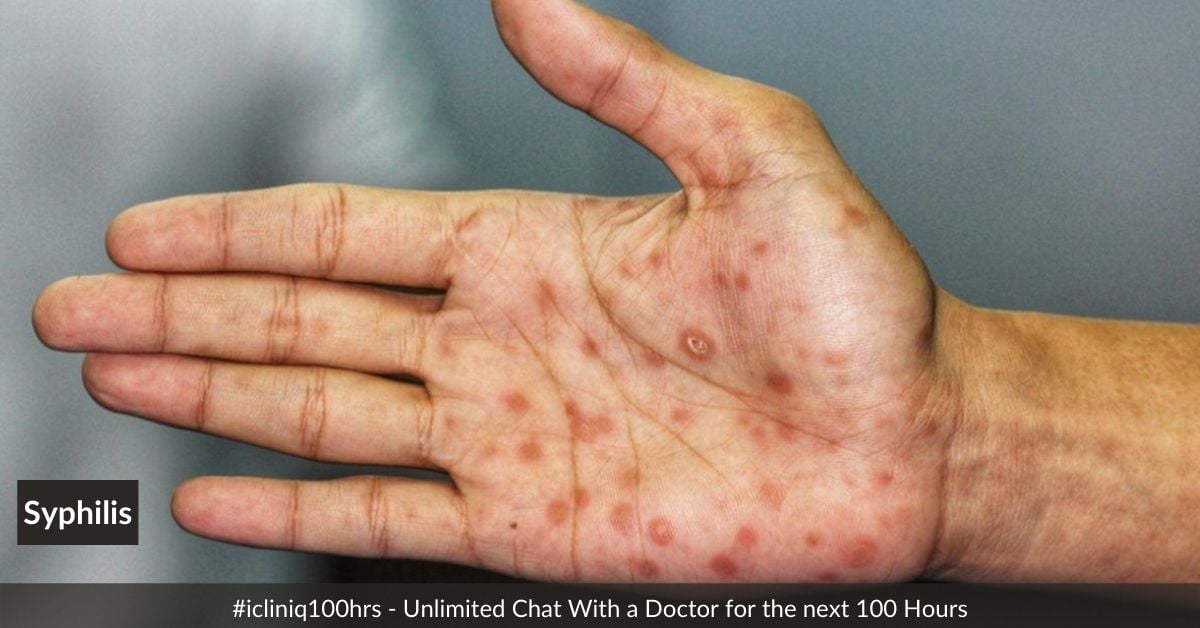 Syphilis if diagnosed during the early stage, is treated with a single shot of Penicillin. This bacteria can lie dormant in the body for many years after the initial infection. Sometimes, this bacteria can cause severe infections of the heart and brain, which can even be fatal.

Syphilis can be transmitted from one person to another through the skin or mucous membrane contact with the painless sore. An infected mother can also spread it to her child, which can result in abnormalities in the baby or death.

What Are the Symptoms of Syphilis?

There are three stages of this disease, and the symptoms depend on these stages. But in most cases, the bacteria can lie dormant for several years without causing any symptoms.

After about 3 weeks of exposure, one or many painless, firm, non-itchy, and round sores appear on the genitals, mouth, or anus. Sometimes these sores may be hidden inside the vagina or anus, so they go unnoticed by the patient. These sores are called chancres, which disappears on its own in 3 to 6 weeks. But if left untreated, the disease might progress to the next stage.

Chancres spread to the trunk, hands, feet, sole, and the entire body. The sores appear reddish-brown in color. The other symptoms include:

The symptoms of secondary syphilis either resolve in a few weeks or keep coming back for some time. This stage progresses to the latent and late stages if left untreated.

Related Topics
I have a bump in my scrotum after safe sex. Will it be a genital wart?
Will Isotretinoin affect my HIV and syphilis tests?
Are there any chances of me getting syphilis by drinking a beverage that someone with syphilis already sipped?

After the initial symptoms, the bacteria lie dormant in the body and produce no symptoms. Most people do not experience any symptoms after the initial attack for the rest of their life. But in some patients, the disease progresses to the next stage. Even if the person exhibits no symptoms, treatment is necessary.

With no treatment, around 15 to 30 % of patients develop tertiary syphilis. The symptoms of this stage can occur after 10 to 30 years of initial infection. The symptoms include:

When bacteria are transferred to a baby through the placenta or during delivery from an infected mother to her baby, it is called congenital syphilis. It is a life-threatening condition. If the mother is not treated, it can result in fetal death, preterm labor, low birth weight, neonatal deaths, and infection. The symptoms seen in newborns are:

How Is Syphilis Spread?

Sometimes, syphilis can spread through kissing, if an infected person has a mouth sore. The bacteria can also spread from an infected mother to an unborn child through the placenta or to an infant during delivery. You will not get infected by sharing utensils, clothes, swimming pools, and using the same toilet.

What Are the Risk Factors of Syphilis?

The following factors increase your risk of acquiring syphilis:

What Are the Complications of Syphilis?

How Will I Know If I Have Syphilis?

If the doctor suspects syphilis after taking a complete medical history and physical examination, he or she will suggest you get the following tests done:

Can Syphilis Be Treated?

Syphilis can be treated easily with a single shot of Penicillin during the primary and secondary stages. If you have a penicillin allergy, then your doctor might prescribe Doxycycline, Azithromycin, or Ceftriaxone.

In tertiary syphilis with nervous system involvement, Penicillin is given intravenously every day until the infection is controlled. The thing to remember is, Penicillin will only kill the bacteria, but will not reverse any damage that has already been done.

What Are the Precautions to Be Taken During the Treatment of Syphilis?

Some of the precautions to be taken are:

Can Syphilis Be Prevented?

Even after getting cured, you can still get infected if you are exposed to the bacteria again. So follow these precautionary measures:

To know more about ways to treat or prevent syphilis, talk to a doctor online through phone or video consultation, or post your query online

After infection, the first sign of syphilis is a small and painless sore, which develops in the place where the bacteria entered the body. If it is left untreated, it might result in such sores on the entire body.

How do you get syphilis?

Syphilis is a bacterial infection, and the bacteria responsible is Treponema pallidum. It is a common sexually transmitted disease (STD).

How common is syphilis?

Syphilis is a very common infection, which affects millions of people worldwide. The rate of people getting affected is growing each year exponentially. The rate is high amongst men who engage in sexual activities with other men.

How to test for syphilis?

The fluid from the chancre or cerebrospinal fluid (CSF) is tested for the presence of the bacteria Treponema pallidum. The presence of antibodies to this infection also indicated present or past infection.

Where did syphilis originate?

The exact origin of this disease is still not known. The first outbreak was recorded in Naples, Italy, in 1495. It is believed that the disease came to Europe from American explorers.

How long does it take to cure syphilis?

With or without treatment, the sore goes away in about 3 to 6 weeks. Treatment is done with a single shot of Penicillin, or a course of oral antibiotics for 2 weeks if you are allergic to Penicillin. If you were not treated, the bacteria lay dormant in the body for many years.

What are the manifestations of tertiary syphilis?

Syphilis can be cured with the help of antibiotics like Penicillin if detected early. The prognosis is bad for tertiary syphilis.

Can you get syphilis non-sexually?

Syphilis will not spread by sharing utensils, clothes, swimming pools, and using the same toilet. You can get infected by transfusing infected blood, and from an infected mother to her baby.

I was misdiagnosed to have syphilis and had treatment. What to do?

Query: Hi doctor, I am a 24 year old male. Before a month, I visited a hospital in my hometown for pain on the penis. They conducted VDRL and TPHA test and said that the test came back as weak positive. So, it is the first stage of syphilis. They prescribed me an injection and some tablets for five days. A...  Read Full »

Article Overview: Sexually transmitted diseases are a group of communicable diseases that are transmitted predominantly through sexual contact. This article discusses about the consequences, risk factors and prevention of STDs. Read Article

Do you have a question on Syphilis Transmission or Syphilis?