What to Do If a Condom Breaks?

During sex, condom breaking brings a kind of panic, but it is more likely to create no harm when the situation is handled properly. Please read the article to know more. 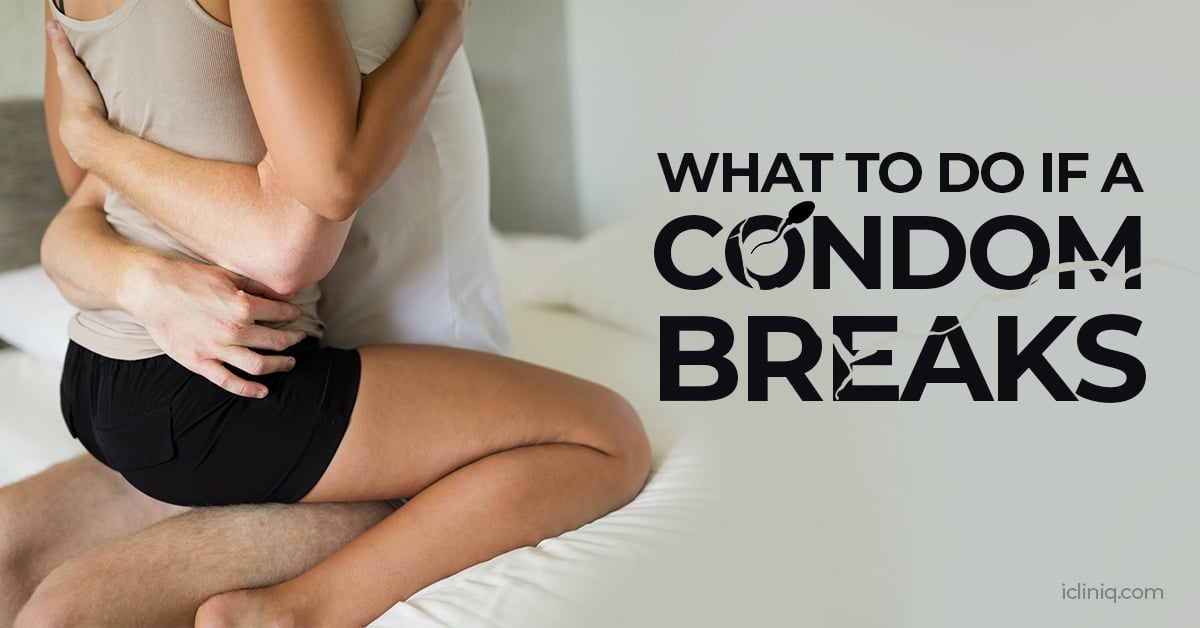 A condom has a variety of purposes, that is, acting as a method to prevent pregnancy and an important shield in preventing the transmission of sexually transmitted diseases (STDs). But people get confused and do not know what to do when a condom accidentally slides off or breaks during sexual intercourse. Such events are infrequent, but there is a chance that they might occur, and having knowledge about this is essential because when you are in such a situation, you should know what should be done next to avoid unwanted pregnancies.

What to Do If a Condom Breaks?

During sex, when the condom breaks, try to remain calm and stop your intercourse immediately by carefully withdrawing the partner's penis. Then look for the broken condom, whether it is still on the partner's penis or it has disappeared inside you.

If the condom breaks after ejaculation, then a significant amount of seminal fluids will have already entered the vagina or rectum. Then, consider the risk of unplanned pregnancy or STDs (sexually transmitted diseases). When you are at risk, take additional precautions to prevent these outcomes.

a) Immediate Steps to Be Taken:

Related Topics
I washed my penis with Dettol handwash liquid. Will this cause any harm?
Is performing ELISA test difficult?
Emergency Contraceptive Pills (ECP) - Safety and Indications

Go straight to the bathroom and do the following steps to prevent pregnancy.

When you are using contraceptive pills, you may want to consider using emergency contraception (EC) which includes a copper intrauterine device (IUD) or hormonal EC pills.

When the partner is unfamiliar with STI (sexually transmitted infection) status, consider getting tested. When you think you or your partner are at risk of contracting HIV, immediately head to an HIV clinic. Explain to the doctor or nurse what happened so that they can start a treatment to prevent HIV infection called post-exposure prophylaxis (PEP). It is a 28-day course of antiretroviral medication that prevents HIV from infecting the body.

After that, you need to take an HIV test to ensure that the medication has worked. Post-exposure prophylaxis is only effective within 72 hours of exposure to HIV. But it will work effectively the earlier you begin treatment.

How to Prevent Condom Breakage?

If you have come across condom breakage, it is important to look for what might have led to the condom failure. This will reduce the risk for future unwanted pregnancy or infections.

If you have a condom tear or break, it may be a sign of a small-sized condom. Look for the size and get the next size one to get a better fit.

When the condom has slipped off during intercourse, then the condom may be too large for the penis. Look for the next small size such that the condom should not move freely and fit snuggly.

The best way to find the perfect fit is to try different sizes until you find the best which fits well like a glove. Once you find one you like, buy it, and keep stock for future engagements.

Avoid using oil-based lubrication because the chemicals in the lubricant can weaken the latex material and can cause the condom to break. Instead, look for water-based lubricants or silicone-based lubes.

Do use lube and apply a little lube to the penis before placing the condom to make it more comfortable. When more lube is applied, the condom may slip or move.

Do not keep old stocks with you, as condoms that are too old are more likely to break. So, check for the expiration date, and use a fresh box of condoms at all times.

Do not wear two condoms at one time because it may cause a tear. People think an extra condom may reduce sensitivity or last longer, but it can lead to discomfort, causing both condoms to tear.

Keep the condoms away from cold, heat, and light because they may weaken the material and increase the risk of breakage. The friction in the wallet and the glove box makes condoms ineffective. Do not open the condom packages with sharp objects like knives, teeth, or scissors because a tiny nick on the surface of the condom can leak bodily fluids. Make sure you store condoms in a cool, dry place.

Condom breakage is a stress-inducing accident. In order to prevent condoms from breaking, always practice the proper usage of condoms, and make sure that the condom is not expired, and the condom is of appropriate size.

Whether I have to take an emergency contraceptive pill even if my partner used a condom?

Query: Hello doctor, I had sex yesterday afternoon. It was on the 14th day of my menstrual cycle. It was a protected sex. My partner used a condom and ejaculated inside it. Now, I am confused whether to take an emergency contraceptive pill or not. I personally do not want to take one because I am worried...  Read Full »

Can taking contraceptive pills before sex be effective in preventing pregnancy?

Query: Hi doctor, How can pregnancy be avoided completely without the help of condoms?  Read Full »

Do you have a question on What To Do If A Condom Breaks or ?